It is almost five months since China first alerted the World Health Organization about cases of what is now called COVID-19. The ensuing pandemic has revealed stark differences in the responses of governments around the world. As Workers World has reported, communist-led governments in countries like Cuba, Vietnam, China and Laos have handled the pandemic much more effectively than capitalist governments in the U.S., Britain, Brazil and Sweden.

India’s state of Kerala, led by the Communist Party of India (Marxist) — CPI(M) — has also achieved resounding successes in both containing the virus and protecting people from its economic fallout. Workers World ran an article on April 2 detailing Kerala’s handling of the pandemic, while capitalist media mostly ignored the state’s response. 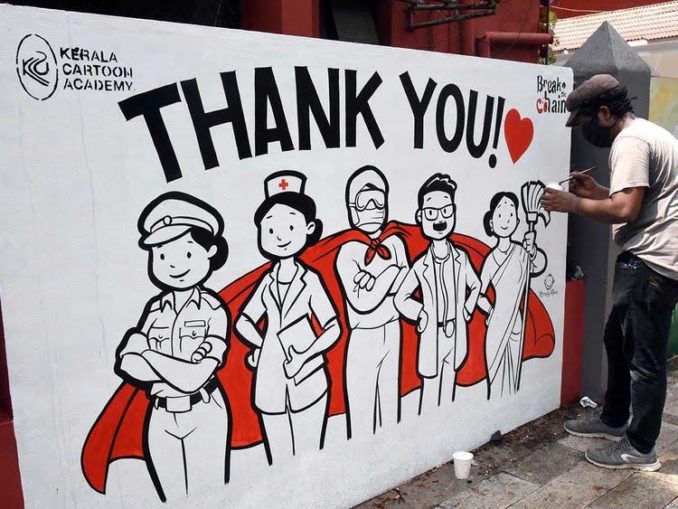 An artist draws graffiti to ‘thank coronavirus warriors’ on the wall of the Ernakulam General Hospital in Kochi.

In contrast, capitalist media outlets continually laud states like New York, led by limelight-seeking Gov. Andrew Cuomo, despite the state having well over 360,000 confirmed cases, 23,000 deaths and a growing hunger crisis, with lines at food banks stretching for miles in what looks like a scene from the Great Depression.

Kerala’s population of around 35 million people is only slightly less than that of California, the most populous state in the U.S. It is not a small state, and its successes cannot be chalked up to having less people to deal with.

On May 22 the New York Times finally picked up on what’s happening in Kerala, conducting an interview with political scientist Pavithra Suryanarayan of Johns Hopkins University, who studies state capacity in Kerala and neighboring Tamil Nadu state. Remarkably, the entire interview makes zero mention of the CPI(M), its mass organizations like the Democratic Youth Federation of India or the Centre of Indian Trade Unions, which have been instrumental in the state’s pandemic response.

The interview hints at the basis of both Kerala’s success and the failure of capitalist countries like the U.S. Suryanarayan posited that “[e]ven if the state has the ability to do something, does it actually do it when it needs to? You have to have a political will that aligns with the capacity.”

The U.S., with its highly developed economy, marshalls massive resources for things like the Pentagon, Wall Street bailouts, mass incarceration of Black and Brown people, and extensive border controls. States like Kerala and countries such as Laos and Vietnam do not have economies that are as highly developed, yet what they do have, and what appears to be the key factor in containing the virus, are proactive, people-centered leftist governments and mass organizations that can mobilize millions of party members and the masses to achieve common goals for the public good.

Without the leadership of leftist and communist parties, and without the strong connection between those parties and the people they serve, it is very unlikely that states such as Kerala would be able to pull off such successful responses to COVID-19.

“Very early on,” Suryanarayan says, “Kerala started to have the feeling of a class-based dynamic, in which what is to be discussed is: ‘How do we create a solid welfare state? How do we come to an understanding about the basics of society that everybody needs?”’ This class-based dynamic contrasts sharply with the political environment in other Indian states, where resurgent Hindu nationalism has inflamed ethnic, religious and caste-based conflicts.

In the U.S., Britain and other developed Western countries, white nationalism and racism are also on the rise, pitting different sectors of the multinational working class against each other. People of East Asian descent have faced a wave of violent attacks and discrimination in the West, with leaders like Trump actively fanning the flames of racism through discriminatory, bigoted rhetoric and actions. The Trump administration has used the pandemic to push more of its racist, anti-immigrant agenda, with advisors like white nationalist Stephen Miller calling for suspending all immigration into the country.

The first action the Trump administration took to ostensibly address the pandemic was suspending all flights from China, despite the virus already being present in the U.S. and already spreading rapidly even as Trump assured the public it would disappear in the country very soon — “like magic.”

Trump has repeatedly touted his decision to suspend flights from China as a great success, even as deaths in the U.S. likely far exceed the official tally of around 100,000 dead. He’s playing to the racist, xenophobic attitudes of his white nationalist base of supporters who will take any opportunity to attack China and other nonwhite states they view as enemies.

The U.S. has deported people who tested positive for COVID-19 back to countries in Central America and elsewhere that have incredibly vulnerable and inadequate health care systems — systems that could be quickly overwhelmed by a crush of COVID-19 infections. This anti-immigrant, racist push in the midst of the worst pandemic in over a century should come as no surprise.

Back in 2016, before he was elected president, Trump blamed immigrants for bringing diseases into the U.S. While baselessly blaming immigrants for outbreaks, his administration slashed funding for and eliminated government programs that detect and manage outbreaks of infectious diseases in the U.S. and around the world.

The U.S. Centers for Disease Control and Prevention was once the envy of the world, regarded by many as the best and most respected public health agency on the planet. But years of budget cuts and chronic underfunding across multiple White House administrations and Congresses have taken their toll on the agency and deeply eroded its ability to fight disease.

On top of that, the people in power care more about getting profits flowing again and winning the next election than they do about the expert opinions of the scientists and public health officials at the CDC and the World Health Organization. They repeatedly ignore their recommendations and instead recklessly push to end pandemic control measures just as new infections and deaths mount in state after state. The U.S. recently eliminated its contributions to WHO, accusing it of being a Chinese pawn, at a time when international public health agencies are needed more than ever before.

The U.S., more than any other country, has the material capacity to not only contain the virus, but to provide for all the basic needs of its people during the shutdown and beyond, from housing and food to health care and employment. It also has the ability to send doctors and medical supplies to struggling countries throughout the world in order to stop the virus globally and prevent the resurgence of the disease.

Yet the U.S. has failed to do so because under capitalism profits come before people.

States like Kerala, with far fewer resources than the world’s sole superpower, have far more effectively protected the health and well-being of their people, regardless of their ethnicity or religion.

Here are links to Workers World articles about COVID-19 and