What is Marxism all about?

“What is Marxism all about?” is a guide for activists that explains Marxist concepts in non-technical language. Terms like imperialism, self-determination and socialism are defined. The Marxist definitions of these words help sharpen an understanding of society from a working-class perspective. 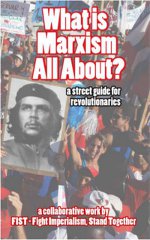 This version is an update of a booklet published by Workers World in 1975 and is based on the 2013 edition. To the right is a link to download a free PDF copy. At the bottom of this page is an embedded PDF.

Class Society
“The workers have nothing to lose but their chains.” “The history of all hitherto existing society is the history of class struggles.” “Workers [and oppressed] of the world unite!” [read more]

Capital & Capitalism
In every society, from ancient times to feudalism and modern capitalist society, it has been the labor of human beings that sustains the society and creates wealth. It is this basic fact, and the acknowledgment of the laborers as a class in bourgeois capitalist society, that has been hidden from so many in the U.S. The history of modern society is the history of struggle between two antagonistic sides: the exploited class – the workers, and the exploiting class – the bourgeoisie. [read more]

Exploitation & Surplus Value
Human labor is a commodity — a thing of value. It is also a value that, when used, creates value. It is from the labor of the worker that the owner derives profit. If a worker is slated to work eight hours, a small percentage of that time is spent covering the cost of the worker’s wage. The rest of the time is unpaid labor — surplus labor — and it is from this that the owner gains extra or surplus value. [read more]

Private Property
Private property, to a communist, is not your shoes or toothbrush, or even your house. [read more]

Dialectical & Historical Materialism
As part of their socialization within class society, workers are encouraged to believe that individual self-interest is the foundation of human nature and survival. If this is true, all of human history has been a struggle driven by greed. Workers are told that society cannot be changed because of “natural” human greed. Workers are given the option of either giving in to that greed or using religion or mysticism to “rise above the material world.” [read more]

Class Solidarity & the Class Struggle
One of the greatest weapons that workers and oppressed people possess against the bosses and capitalists is our unity. When Marxists speak or write about proletarian solidarity, working class solidarity and international solidarity, they mean the complete unity of interest of all the peoples oppressed and exploited by capitalism. It is only by coming together in solidarity — it is only through closing ranks against the common enemy — that any victory has ever been won by the masses of people. [read more]

Imperialism & Globalization
Television viewers can turn on any news channel almost any time of day and within moments images of war will spring across the screen. Images of ground troops in Iraq, U.S. military bases in Korea and air raids in Afghanistan are complemented by the voices of somber newscasters warning about the potential of a naval blockade against Iran or political and humanitarian crises in places like Zimbabwe and Darfur. [read more]

Women’s Oppression
The oppression of women in the 21st century is perhaps more multi-faceted and developed than it has been historically. Gains in women’s rights have been products of the protracted struggle of women and anti-sexist allies over the centuries, but these gains have not ended the oppression of women. [read more]

Racism & Oppressed Nations
In an open colonial relationship, it is easy to recognize an oppressed nation. [read more]

Self-Determination
All workers, regardless of national background, have the same class interests. They all need to eliminate capitalist exploitation and replace the rule of the bosses with the rule of the workers — socialism. It is clear that this tremendous task can’t be achieved without the closest possible unity and trust among all workers. But when one or several sections of the working class are oppressed over and above the class as a whole, when in fact they belong to a people who constitute an oppressed nation, then the problems of unity are complicated. [read more]

Culture
Dictionary.com defines culture as “the behaviors and beliefs characteristic of a particular social, ethnic, or age group.” This definition is not necessarily incorrect, but it is wholly inadequate. Culture is all encompassing. It is part of the superstructure. The thoughts, ideas, actions, language, arts — every human endeavor or expression is connected to a society’s culture. It is not something static, but evolves and is intimately bound to the real and material world. [read more]

How the State Arose
When Marxists speak of the state it is not in the sense that many in the U.S. are accustomed to; it is not in reference to, for instance, the state of New York, Ohio or California. What is meant is the repressive apparatus of the government. [read more]

The State Today
The U.S. has developed one of the most extensive and brutal states in human history. This state appropriates the meager earnings of the working class to finance its huge armies of war and occupation as well as killer unmanned drone bombers, which it deploys at will to countries such as Pakistan, Yemen, Libya, Iraq and Afghanistan; and to fund the police state and prison system, which presently imprisons well over 2 million people, half of whom are people of color. [read more]

Democracy
The word “democracy” is Greek in origin. Literally it means “rule of the people.” In a democracy, the control of society is supposed to be held not by the elite, but by everyone, equally. Democracy is often held up as the opposite of a dictatorship, in which a small group has the power. [read more]

Reformism
Throughout the history of capitalism, the workers have had leaders who have guided the struggles that won the few basic rights we have today: the eight-hour work day, the right to unionize and an end to child labor are just a few examples. [read more]

The Labor Bureaucracy
Sometimes union leaders get paid as much as a boss. They wheel and deal with the politicians in the back rooms like a boss. When it comes time to call a strike or fight hard for a better contract, sometimes you think they are listening to the boss. [read more]

Fascism
Nowadays when people speak of fascism, they speak of Nazis and jack boots, Mussolini, and Franco. [read more]

Revolution
The Bolshevik Revolution in 1917 smashed the Russian capitalist state and brought a workers’ party to power for the first time in history. Later revolutions in China, Vietnam, Korea, Cuba and elsewhere would smash the existing state in those countries and bring parties of workers and peasants to power. In each case the workers’ party, or communist party, was dedicated to the construction of socialism and the long- term transition to a fully communist society. [read more]

Socialism
Socialism is a system in which the working class controls the means of production and the distribution and exchange of goods. A socialist society is a society ruled not by the elite, but by the masses of people. [read more]

Socialist Countries
Socialism, a system in which the working class takes control of the means of production and the distribution and exchange of goods, is not just a fantasy, pipe dream, utopian vision, or good idea. In fact, even though socialism was generally constructed despite a history of underdevelopment and imperialist intervention, this new economic system has proven itself to be far superior to capitalism. [read more]

Communism
The latest scientific view is that human beings first evolved from earlier primates more than 200,000 years ago in Africa. [read more]