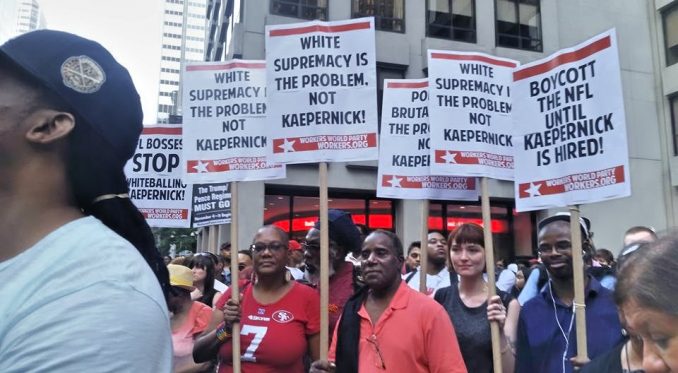 Established to honor the historic 1886 struggle of Chicago workers for the 8-hour day, May Day marks the worldwide fight for workers’ rights on May 1. There’s lots of good news this year: Education workers all over the U.S., from K-12 schools to universities, started a strike wave to organize for higher wages and better working conditions. Well-paid Amazon and Google workers have joined low-wage McDonald’s workers in staging walkouts.

While Trump and the global ruling class are waging war on the Bolivarian Revolution in Venezuela, his administration is making war on Central American im/migrants and refugees seeking entry into the U.S. Workers are threatened with deportation after escaping horrific conditions caused by U.S. intervention in their home countries. Neo-Fascist U.S. policies separate infants and children from their parents at the border and jail underage migrants crossing the border alone.

If you want to fight against capitalist reaction and for socialist change, we invite you to join the WW Supporter Program. The program was founded in 1977. Ever since, our subscribers and friends have helped build the only revolutionary socialist weekly in the U.S. that’s in print as well as on the web.

For a donation of at least $75 a year — and more if you’re able — members receive a year’s subscription to WW, a monthly letter about timely issues and five free subscriptions to give to friends. Write checks (either monthly or once a year) to Workers World and mail them, with your name and address, to 147 W. 24th St., 2nd Floor, New York, NY 10011. Or sign up to donate online. Know that we’re grateful for your help in building Workers World!