On May 17, word spread via social media that Major Tillery, a political prisoner at Pennsylvania’s State Correctional Institution Chester, was sick with chills, a sore throat and a fever for several days. On hearing of Tillery’s illness and knowing that COVID-19 was running rampant in U.S. prisons, the international prisoner defense movement sprang into action. It launched a petition, in English and French, and a phone and letter-writing campaign directed to SCI Chester administrators. 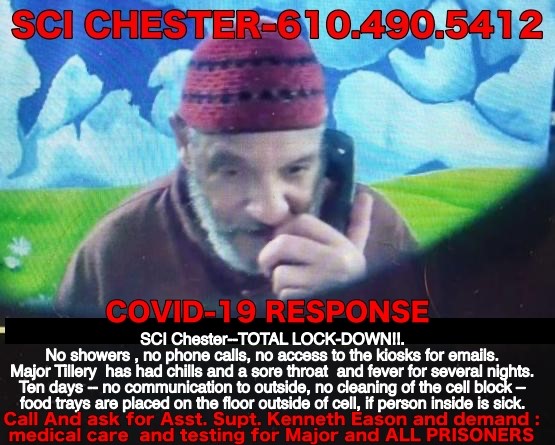 In addition to demanding medical treatment for Tillery, the campaign protested the total prison lockdown. Prisoners have been denied showers and cleaning of cell blocks, as well as phone calls or other communication with the outside. Food for sick prisoners was placed on the floor outside their cells.

Tillery has alerted supporters that a major roadblock to receiving treatment is Dr. Paul Little, employed by Wellpath, who has the final say on which prisoners receive COVID-19 tests. Tillery writes: “They saying they are protecting the elderly by locking us up for 24 hours, but with no air and no movement for months is killing us with [our] respiratory problems, no vitamin D. In the last 9 days we have received nothing.  …  They are using this pandemic as punishment.”

It was Tillery who blew the whistle in 2015 when Mumia Abu-Jamal was near death due to untreated hepatitis C in SCI Mahanoy. When the Pennsylvania Department of Corrections (PADOC) retaliated by moving Tillery to SCI Frackville, he filed a federal pro se lawsuit demanding medical treatment for Mumia and all prisoners. At Frackville, after he succeeded in obtaining services for aging prisoners, the PADOC retaliated again and moved him to SCI Chester.

Tillery, whom Abu-Jamal describes as a “jailhouse lawyer who shook the prison walls,” has been held in solitary confinement for 20 of his 37 years in prison “because of something prison administrators hate and fear above all things: prisoner unity; prisoner solidarity.” (For information on his case, see justiceformajortillery.org/.)

PADOC statistics list one prisoner and 14 guards as COVID-19 positive at SCI Chester as of May 18, but do not say how many prisoners were tested. Statewide, 226 inmates and 157 guards have tested positive, with five prisoners and one guard dying from the virus.

In addition to the call-in campaign, the Coalition to Abolish Death by Incarceration rallied outside SCI Chester on May 19, urging officials to release inmates, especially the elderly and sick. The protests and call-ins had an impact. By May 20, people incarcerated at SCI Chester were getting showers, phone calls and access to prison kiosks. The prison also started randomly testing 30 to 40 people at a time. However, as of this report, Tillery has not been tested.

I just watched with deep interest your January 2017 talk on “The Path to Prison” (TEDx Talks/You Tube). My father, the late African American writer Richard Wright, used to quip: “Who would ever want to be a cop or a prison guard?” But as a journalist he also taught me how to listen to all sides of all stories, so I paid careful attention to your reminiscences of your traumatic childhood years at the hands of bullies.

You spoke of your fears resulting from bullying: Would you get your lunch money stolen? Would the contents of your bookbag be strewn on the ground for you to crawl all over? Would you get beat up? No wonder you developed a stutter, a difficulty to look people in the eye, and started to pull your hair out.

As my father recalls in his book “Black Boy/American Hunger,” he too was bullied at an early age, but his mother, who was the wife of a sharecropper, the son of a slave, could not afford boarding school. She gave him a thick stick and sent him out to face the bullies or return home to corporal punishment. The result: a narrative which is now taught in U.S. schools.

Your mother chose a different but sincere path: She sent you to the Milton S. Hershey School for Disadvantaged Children. You say in your comments: “At last, I felt safe.” You graduated and eventually become a prison custodian and now, under COVID-19, the acting Superintendent of SCI Chester.

Central to the problem of bullying is the preying by virulent and violent elements over vulnerability and helplessness. The super bully today is the virus threatening bullies and bullied alike. To the extent you, an African American single parent’s son, were bullied when little, I hope you can place yourself in the shoes of the elderly, vulnerable and immunocompromised, whose immediate release would constitute no threat to the community.

I was struck by your lifelong respect for your mentor Milton S. Hershey (who died in 1945, the year [Wright’s famous novel]“Black Boy” was published). Clearly, you sincerely cherish Hershey’s vision of help for the disadvantaged before it is too late.

Consider that this is your opportunity to turn your prison into a safe, caring, disinfected, COVID-19-free space. Just as your mentor Milton S. Hershey turned his school into a model of safety, welcoming bullied children, now you have the opportunity of becoming the Black Hershey of the U.S. carceral system by turning SCI Chester into a new experiment of safety, justice for all and an enlightened policy of release under COVID-19 for all to emulate.

I call upon you to provide testing for all inmates and staff, with transparency on numbers of positive cases; to disinfect all cells and common areas; to provide regular access to showers, hygiene and PPE for all inmates and staff.  Provide yard, phone and internet access to all prisoners on a regular basis, with regular walk-throughs by prison administrators, including yourself.

And grant the immediate release of as many prisoners as possible from SCI Chester, including Major Tillery who is elderly, African American and more likely to catch the virus, [as he is] already immunocompromised. His having set up a welfare program for elders behind bars is not a threat to the community, on the contrary.  In the spirit of your mentor, yours sincerely, Julia Wright