In an act of solidarity, Iran is sending a fleet of five tankers carrying 1.53 million barrels of needed gasoline and related fuel products to Venezuela. On May 23 and 25, the first two ships traveled through the Caribbean Sea and entered Venezuelan territorial waters with a Venezuelan naval and air escort. That delivery broke Washington’s criminal blockade against the Venezuelan people. 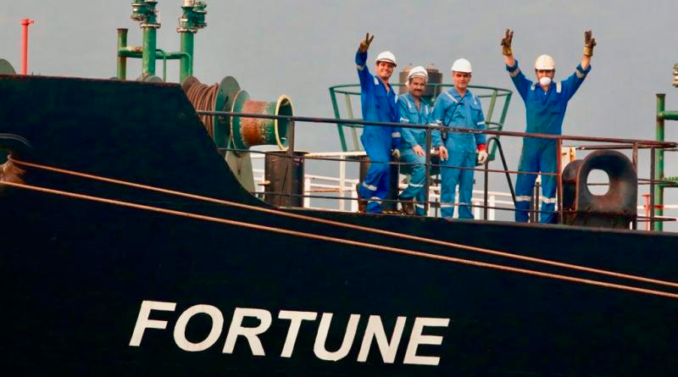 Venezuelans in Caracas, the capital, are cheering the victory over the U.S., which had threatened to stop the ships by force. Of Iran’s determination and solidarity, Venezuelan Foreign Minister Jorge Arreaza said, “Iran and Venezuela have always supported each other in times of difficulty.” (Guardian, May 23)

Both sovereign nations — Iran and Venezuela — challenged severe U.S. economic sanctions and bellicose threats of military action. President Donald Trump announced that the U.S. had Venezuela surrounded. So far Washington has not attempted retaliation following the delivery. It remains to be seen whether the U.S. will act against either or both countries.

Iranian President Hassan Rouhani strongly warned the U.S. against interfering: “If our tankers in the Caribbean or anywhere in the world face trouble caused by the Americans, [the U..S.] will be in trouble. We have the legitimate right to defend our sovereignty and territorial integrity and to serve our national interests.” (Guardian)

The danger of U.S. military intervention is ever-present, given the history of U.S. attacks against Iran and its attempts to subvert Venezuela’s Bolivarian government led by President Nicolás Maduro. In April, Washington ordered additional Navy warships, surveillance aircraft and special operative teams to the Caribbean, sending more destroyers close to Venezuela.

Washington lashed out verbally at Russia, China, Cuba, Iran and Venezuela about Iran’s bold action, and U.S. military brass warned that their warships are patrolling the Caribbean.

In another show of support for Venezuela, Dmitri Polyanskiy, Russia’s U.N. representative, introduced a resolution in the U.N. Security Council on May 22, calling for no interference in Venezuela. In effect he denounced the May 3-4  coup attempt against the Bolivarian government. Russia’s resolution appealed to member-states to condemn the use of force, mercenaries and all forms of terrorism.

Venezuela’s military stopped the incursion carried out by a 60-person paramilitary force in speedboats, led by U.S. Army Special Forces veterans, whose goal was to overthrow Maduro. Funding for their training camps in Colombia came from Venezuelan counter-revolutionary politician Yon Goicoechea.

Venezuela has 300 million barrels of oil reserves, the largest of any one country. Oil revenue accounts for 95 percent of Venezuela´s export earnings.

Why does Venezuela need to import fuel?  Venezuela needs diluents to refine its heavy crude oil so it can flow through pipelines. U.S. sanctions have stymied domestic production of gasoline, as they prohibit importing diluents.

Washington imposed the sanctions to force out President Maduro and his administration. As Marco Teruggi explained, “The United States government wants to strike at the heart of the Venezuelan economy: oil. The objective is to ensure that a collapse of the state-owned company PDVSA brings down the whole economy.” (workers.org, March 13)

Sanctions have harmed the Venezuelan people, as funds from oil exports are used to buy essential food and medications.

Venezuela’s oil output dropped precipitously in 2017 and 2018, but rose in 2019 and was stabilizing. This winter, the Treasury Department imposed sanctions on subsidiaries of Rosneft, Russia’s largest oil producer, in an attempt to force the company to stop transporting Venezuelan oil. Rosneft carried 60 percent of PDVSA’s oil. Rosneft closed its Venezuela operation in March.

The coronavirus pandemic then triggered an economic slowdown that reduced the global market for oil, so the already existing glut grew.  Major producers agreed to decrease output.  But prices remain low, which is hurting PDVSA’s operations and joint ventures. Venezuela’s fuel shortages are recurring now due to falling oil output and the deepening impact of U.S. sanctions.

Also, the infamous 2019 electrical outages damaged Venezuelan refineries. President Maduro blamed them on sabotage instigated by forces tied to U.S.-backed opposition leader and self-proclaimed “president” Juan Guaidó. The two remaining refineries were closed in January due to lack of crude oil to process and the need for repairs and spare parts.

Iran volunteered to bring fuel and technical support to repair the Paraguana Refining Complex, Venezuela’s largest oil facility. Aided by technicians from Iran and China, repairs have begun. Recently, 20 Iranian flights have transported 700 tons of refinery parts and other materials from Iran and China.

But Washington is threatening Iran over its air corridor with Venezuela and ordering other countries to stop Iran’s overhead flights and end trade and business deals with and fuel shipments to Venezuela.

Yet calls are growing for the U.S. to end the brutal sanctions against Iran and Venezuela, especially now during the pandemic, so both countries can better combat the deadly disease.

Material for this article also came from the Orinoco Tribune, TeleSUR and Venezuela Analysis.