Cuba continues to illustrate international health care solidarity in its response to the COVID-19 crisis.  The island nation has sent brigades of doctors and supplies to Italy, Venezuela, Nicaragua, Jamaica, Suriname and Grenada. (telesurenglish.net) Meanwhile, the United States has been criminally negligent in stopping the spread of COVID-19 and in testing and treating its own people. 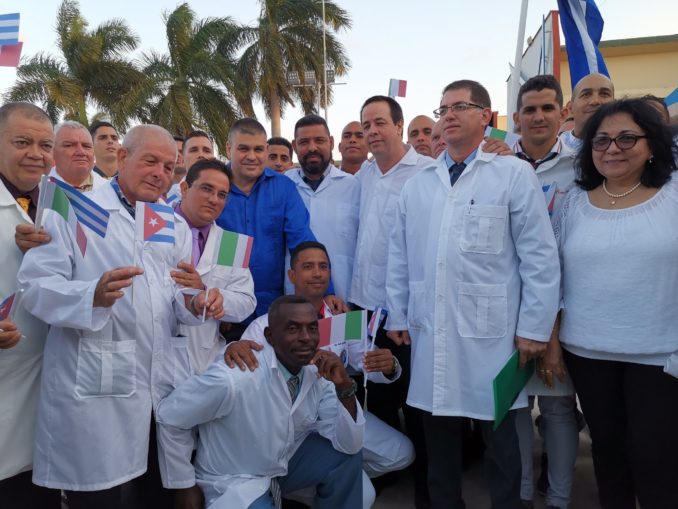 Cuban doctors and nurses head to Italy to aid in fight against COVID-19.

Cuba has 28,268 members of medical brigades working in 61 countries around the world, according to Dr. Jorge Hidalgo Bustillo, director of the Central Unit for Medical Collaboration. All of them are COVID-19 negative and are being monitored daily.

Through a joint venture with China, Cuba is producing large quantities of an antiviral medicine called Interferon Alpha 2b. This vital drug is “recognized as one of the most effective medicines in treating this virus. It is credited with saving 1,500 people from [dying of] the virus in China alone … and Cuba’s producer of medicines, BioCubaFarma, is producing 21 other compatible medicines for the treatment of complications that may arise in patients with COVID-19.” (dissidentvoice.org)

The Cubans gave permission for the British cruise ship — the MS Braemar with five confirmed cases of COVID-19 and dozens of symptomatic travelers on board — to dock in the harbor at Mariel, west of Havana, on March 18. Cuba then treated those affected by the virus and arranged passage home for the rest of the passengers.

In explaining the gesture, Cuba’s Ministry of Foreign Affairs issued a statement March 18 on Twitter, saying, “These times call for solidarity, understanding health as a human right and strengthening international cooperation in order to address our common challenges; values that are inherent to the humanist practice of the Cuban Revolution and people.”

For Cuba: Global health care is a right

Cuba has proven its ability to stay in the forefront of medicine in areas like cancer care and ending mother-to-child HIV transmission. Cuba consistently lives its values by providing free health care around the world.

In 1965, Cuba established the National Center for Scientific Research with the aim of using scientific methods to solve biomedical problems and develop sophisticated products.

Cuba also established the Latin American School of Medicine in March of 1999. Since then the country has trained thousands of medical students from over 124 countries, free of cost, who pledge to return home to provide health care to the indigent.

Due to its first-rate nationalized health care system, the island nation has one of the highest life expectancies and lowest infant mortality rates in the world, according to the World Health Organization.

Cuba has been on the frontlines of many global struggles, providing aid to those who need it. Cuban doctors were the first to arrive after calamitous earthquakes in Pakistan in 2005 and Haiti in 2010 to fight a major cholera outbreak. Cuba’s  revolutionary doctors cared for 20,000 cancer victims after the Chernobyl nuclear disaster in Ukraine from 1989 to 2011, all free of charge. Cuban doctors also helped treat those affected by Ebola in Western Africa in 2014.

In February 2020, underserved and neglected by the settler-colonial government of Canada, First Nations leaders from Manitoba met in Havana to discuss a possible health care partnership. (cbc.ca)

To put this meeting in context, an Ojibway-Cree person explained in a March 11 tweet: “During the H1N1 crisis at my home reserve a few years back, the government sent body bags when we asked for help.”

All this aid is provided while Cuba has been under a unilateral blockade by the U.S. for over 60 years, with new sanctions imposed regularly.