While the history of captivity remains a stain on this society, those directly affected by these conditions point to things officials can do to protect the incarcerated population. When that fails to happen prisoners face no choice but to take matters into their own hands. 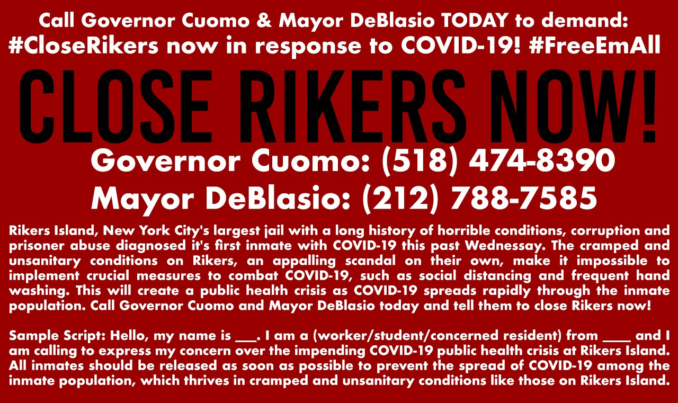 Journalist Kim Kelly broke the news on March 22 that two dorms at Rikers Island are on strike. Their statement reads: “Two dorms of 45 inmates at Rikers are refusing to leave our dorms for work duties or for meals. We must take these actions in protest of the lack of personal protective equipment (PPE) and cleaning supplies provided to inmates, the crowded living conditions imposed on us prior to the pandemic and made worse by the daily addition of new inmates from other facilities, some of whom are highly likely to have been exposed to the COVID-19 virus, and the arbitrary disconnection of our phones for three hours on the morning of March 22.

“We demand the same calls issued by the Board of Corrections. That all inmates: over 50 with parole violations, at high risk due to health conditions, with less than a year of sentenced time BE IMMEDIATELY RELEASED. We do this in solidarity with the striking prisoners of Hudson County.”

On March 17 a New York City Department of Corrections employee died after testing positive for the coronavirus COVID-19.  In a press release, the NYDOC stated that the employee had “limited contact” with people in custody.

The first confirmed case of COVID-19 for an inmate at Rikers Island was announced March 18, just hours after it was confirmed that a guard at a security checkpoint tested positive.

Since then, the number of incarcerated people at Rikers testing positive for the virus has reached at least 38. Given unsanitary conditions, overcrowding and lack of access to medical care at Rikers (medical facilities have zero ventilators), it is imperative that decarceration be prioritized before this vulnerable and captive population is decimated.

Nick Pinto described the subjugation at Rikers Island facilities for the Intercept: “They are locked in filthy intake rooms with dozens of other people for days on end, confined to housing units or dorm-style sleeping areas with scores of other people, dependent on staff for soap and on correction officers for permission and an escort to visit a medical clinic. The roughly 5,400 men and women detained in city jails on Rikers Island don’t have the agency to protect themselves from the disease, even as they are constantly exposed to the contagions of the outside world through the constant churn of three daily shifts of corrections officers and staff.” (March 18)

This particular jail and this country have a long history of super-exploiting the labor of incarcerated people. Responses to this global pandemic show that, unsurprisingly, the current moment is not divorced from centuries of violent history inside and outside prison walls.

Gov. Andrew Cuomo announced that New York state plans to use the labor of incarcerated people to produce 100,000 gallons of hand sanitizer a week. Inmates will receive $1.15 an hour or less for their labor, and hand sanitizer is considered contraband in prison, due to its alcohol content.

New York City has a Pandemic Influenza Surge Plan for Managing In- and Out-of-Hospital Deaths, which details using the labor of those incarcerated at Rikers to bury bodies in mass graves on Hart Island if the city’s cadaver storage and cremation facilities are overwhelmed.

Incarcerated people were digging graves on Hart Island in the 1980s and ’90s, where bodies of those who died of AIDS were sent to be buried. (nyc.gov)

Conditions are rapidly worsening at Rikers, and both Mayor Bill de Blasio and Gov. Cuomo’s responses are criminally negligent. The fact that they are not prioritizing releasing people from detention is setting the stage for genocide.

There is also a campaign demanding that Rikers Island be shut down and all prisoners be freed immediately. Call Gov. Cuomo at 518-474-8390 and Mayor de Blasio at 718-788-7585 to take part in that campaign.

Whether it’s the millions of people criminalized and incarcerated in the United States, or the hundreds of thousands of migrants detained within its violent borders, we must free them all. This moment, and every moment, calls upon us to demand that we use our resources to provide material care, not cages.