The COVID-19 pandemic has affected almost every region of the world. The speed at which it spreads and the relentlessness of the infection rate make it difficult to contain and dangerous to leave unabated.

Some wealthy Western capitalist countries in Europe and North America have had limited success in containing the virus, their hospital systems becoming rapidly overwhelmed as death tolls mount.

Yet there are places with less developed economies than the Western capitalist countries that have nonetheless been able to mitigate and even contain the virus to a much better degree. 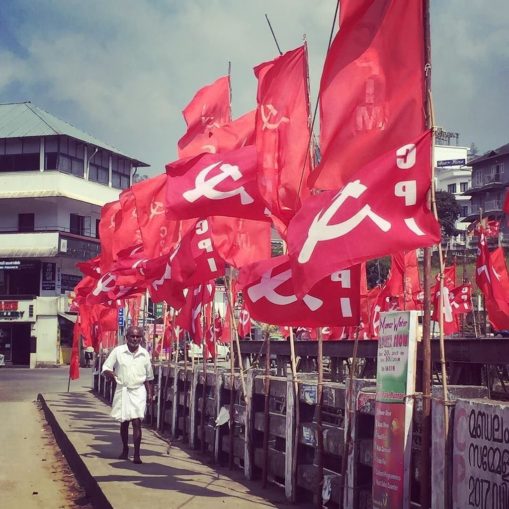 Flags of the Communist Party of India (Marxist) by the roadside in India’s Kerala state.

China, Cuba, Vietnam and the Democratic People’s Republic of Korea have all managed to bring the virus under control through innovative, swift, highly organized responses. So has India’s Kerala state, situated on the country’s southwestern coast.

What Kerala, Cuba, China, Vietnam and the DPRK all have in common is leadership by communist and workers’ parties that prioritize the needs of the people, including public health.

Since 1957 Kerala has been led by various leftist movements, including the Left Democratic Front since 2016. The LDF is a coalition of several communist and socialist parties centered around the Communist Party of India (Marxist) — CPI(M) — with over a million members.

The CPI(M) was formed out of a split from the older Communist Party of India in 1964 due to ideological differences primarily emanating from the Sino-Soviet split, which affected communist parties the world over. The CPI, however, is a member of the governing LDF and works constructively with the CPI(M) to achieve the common aims of socialism.

Over the decades, Kerala’s leftist movements and governments have transformed the state and greatly improved the lives of its 35 million people. It has India’s highest literacy rate (93.9 percent), highest life expectancy (77 years) and highest Human Development Index score (0.712 in 2015). (HDI is a statistical composite index of education, life expectancy and per capita income indicators.)

In Michael Parenti’s book, “Blackshirts and Reds: Rational Fascism and the Overthrow of Communism,” he wrote: “Consider Kerala, a state in India where the actions of popular organizations and mass movements have won important victories over the last forty years against politico-economic oppression, generating a level of social development considerably better than that found in most of the Third World, and accomplished without outside investment. Though Kerala has no special sources of wealth, it has had decades of communist organizing and political struggle that reached and moved large numbers of people and breathed life into the state’s democracy.”

Kerala has emphasized spending on health care, with the number of government hospital beds (1.05 per 1,000) being close to twice the national average of .55 per 1,000. India’s private hospitals are far too expensive for the majority of the population and cannot meaningfully contribute to treating all those suffering from the disease, so the burden falls on state-run hospitals.

From 2006 to 2011, Kerala overhauled its health care system, modernizing and expanding it to meet the needs of its population. During that same period, Western countries slashed health care funding as part of deep austerity measures in the wake of the 2008 global recession.

The work done over previous decades has prepared Kerala to confront the novel coronavirus pandemic. The government created the slogan “Break the Chain” as part of a mass education campaign that encourages people to limit infection through proper isolation, social distancing, quarantines and sanitizing.

Kerala has tested more people than any other state in India.  Its health authorities use the data from testing to thoroughly trace the contacts of infected individuals and the locations where they have been. The resulting data are used to generate maps that are widely distributed on social media and by a government app to the public, swiftly informing them of places where they were potentially exposed to the virus.

The Democratic Youth Federation of India, an independent organization that acts as the mass organization for the CPI(M)’s youth wing, has begun to produce hand sanitizer. Some of the 4.5 million members of the Kudumbashree women’s cooperative are producing masks. The mass organizations of the CPI(M) have directed their energy to cleaning and disinfecting public areas, while the Centre of Indian Trade unions, the largest trade union federation in Kerala, has taken on the work of sanitizing public areas.

These mass campaigns not only reduce the spread of the virus, they also help educate the public at large. The government took over vacant buildings to use as quarantine centers for those who cannot safely quarantine at home due to crowded living conditions or other issues. Everyone in the quarantine centers receives free food and treatment, unlike in the U.S. where treatment can cost thousands of dollars, thus discouraging many from seeking testing and treatment and therefore exacerbating the spread of the virus.

Kerala’s government has also set up call centers staffed with mental health professionals who field calls from those distressed and overwhelmed by the situation. So far they’ve conducted over 23,000 sessions.

While the response of Prime Minister Narendra Modi’s right-wing Hindu nationalist government has been lackluster at best, Kerala’s Chief Minister Pinarayi Vijayan, a politburo member of the CPI(M), announced a $270 million relief package that shores up funding for the public health care system. The fund also includes loans to families through the Kudumbashree women’s cooperative, free food grains such as millet or rice, two months of pension payments for the elderly, higher payments for a rural employment program, and canteens that prepare and distribute subsidized meals. Payments for utilities like power and water and interest on debts have been suspended.

The global neoliberal capitalists have spent decades attacking “big government” that prioritizes public well-being over private profits, denouncing countries from Venezuela to China to Vietnam as “authoritarian” and lauding militaristic imperialist powers such as the U.S. as paragons of freedom and “democracy.”

The COVID-19 pandemic is exposing which systems are most capable of protecting human lives, especially the lives of the most vulnerable. This flies in the face of the narrative promoted by Western corporate media and governments which cast the “free market” as uniquely efficient and productive: the only mechanism capable of meeting society’s needs. Massive shortages of essential medical supplies in Western countries seriously undermine capitalism’s claims to legitimacy.

States and countries with proactive, communist-led governments, despite being less economically developed than the Western capitalist powers — which have enriched themselves through centuries of colonialism and imperialism — are able to mobilize the masses to achieve social goals. They cultivate social solidarity and a sense of shared interests and responsibilities that allows them to confront disasters in a way that capitalist governments, despite their massive resources, cannot replicate.