A growing world confrontation is roaring onto the political and economic scene. Not a day goes by without the corporate media in the U.S. carrying totally distorted and negative news attacks on the People’s Republic of China.

Republicans and Democrats are trading barbs over who is “soft” on China. Business contracts and major trade deals are ruptured. Long-established science collaborations and academic and art exchanges are being unilaterally cancelled. 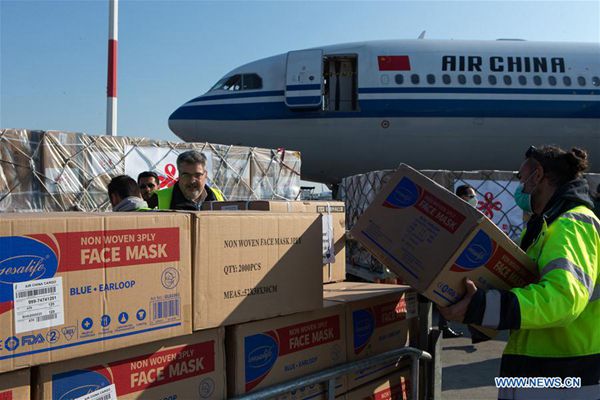 Eight tons of medical supplies donated to Greece by the Chinese government arrive in Athens on March 21.

All this confirms a growing anti-China consensus in the U.S. corporate ruling class.the COVID crisis has made it clear to millions that the U.S. government is not just incompetent. It is actually incapable of solving the problems confronting not only the U.S. but the entire world.

The COVID-19 pandemic puts the source of contention into sharp relief. The struggle is about much more than two contending nation states or two great powers, as many commentators claim. At the same time, the contradiction that cannot be resolved is between a globalized world economy and the still existing but archaic capitalist system, based on the private expropriation of wealth and resources. The relentless drive of capitalism to reap a profit from every type of human interaction now stands exposed as the greatest danger to the people of the whole planet.

Cooperation is a threat

U.S. capitalism has no effective way of dealing with the COVID-19 pandemic, even at home. This is a very public humiliation. It is also incapable of offering leadership to its imperialist allies or to the developing countries it has long dominated.

The narrow for-profit constraints of capitalism, the absolute need to maximize profits in order for the system to survive, make global cooperation impossible and deeply threatening.

Capitalist economic crashes have been part of an inevitable cycle for the past 300 years. In today’s thoroughly globalized economy, a cyclical crash can upend the lives and security of millions overnight.

China has been able to avoid these cyclical crises, but you wouldn’t know that here. Its success is obscured by a barrage of attacks claiming to value freedom over dictatorship.

Democrats blame Republicans for the economic crash here, and vice versa. But both political parties and their talking heads understand that the competitive for-profit system itself must not be blamed. That could lead to revolutionary conclusions.

The U.S. now has the world’s highest number of COVID-19 fatalities, almost 100,000, as of May 25. China, with four times the population, has had fewer than 5,000 fatalities. (worldometers.info/coronavirus/#news) This stands as a monumental indictment of the capitalist system, which is of course ignored in the corporate media.

The chaotic disorganization in the U.S. and the inability to test the population, even five months after the virus started to spread, expose the fragmented and competitive infrastructure.

By contrast, China, still a developing country and hit first by the virus, has exhibited an orderly, scientific and highly organized response on a national scale. The whole country shut down, practicing social distancing and strict health protocols. At the same time, tons of equipment and thousands of medical personnel, outfitted head–to–toe in protective medical gear, were rushed to Wuhan.

Next, China sent hundreds of plane loads of medical equipment to every country in Africa and throughout Asia. Essential supplies were also shipped to Europe and the U.S.

And the U.S. government? At the very moment when appeals for human solidarity and cooperation were being made, Washington was instead hijacking and redirecting supplies from countries it had put under sanctions.

In other places where building socialism is the goal — including Vietnam, Cuba, Venezuela and even the state of Kerala in India — a mobilized population has proven the best protection against the virus and kept casualties very low.

Competition at all costs

The U.S. failure to adequately test the population represents a failure of a system. The U.S. has no national health care system. Medical care is generally provided on a for-profit basis, from giant hospital groups to pharmaceuticals, labs and urgent  care centers.

State and city agencies were already gutted of funds. In the past decade, many social services have been privatized and contracted out to private corporations.

The World Health Organization had offered a mass-produced and easily available test kit, used by more than 153 countries. But instead, the production of kits was given to private U.S. labs, which bid for lucrative contracts to make millions of kits. Many of them were defective. The whole campaign, which lacked any cohesive plan, was plagued with errors.

As a result, the U.S. still has one of the lowest rates of testing of any impacted country. This has hampered the ability to get accurate information on the spread of the coronavirus.

Because the U.S. lacks a national health care system, the reporting of local test results to  state and national databases is still in complete disarray. The same thing is true of treatment plans and allocating scarce medical supplies.

The world epicenter of the virus became New York, a financial and media center and the largest city of U.S. imperialism. This made the medical chaos impossible to ignore. Now it is spreading across the country and is far from controlled.

As university labs try to fill the gap and help produce test kits, they run into a wall. Hospital systems and health insurance conglomerates are locked into exclusive contracts with giant private labs like LabCorp and Quest, which use competing and often incompatible software programs. It is almost impossible to enter a test result that is out of the network. (New York Times, May 21)

The racist and arrogant Trump administration is not the only cause of the COVID-19 fiasco. State governors, city mayors, Democrats and Republicans[,] are trapped in a tangle of conflicting regulations, competing lobbyists, exclusive contracts and unconnected platforms. Even arriving at a consistent and timely count of the number of positive tests and soaring fatalities is still impossible.

More than two months ago, a bipartisan $2.2 trillion stimulus package was hammered out in Congress. Great promises were made of relief for workers and small businesses. But it turns out that only 4 percent of the “stimulus” is for working people. Moreover, migrants, prisoners and homeless people receive nothing.

The $367 billion promised to small businesses to stay afloat was immediately grabbed by large corporations. At the same time, trillions of federal dollars are being pumped into the stock market in a desperate attempt to revive it.

Millions who qualify for the meager funds are still jumping through bureaucratic hurdles — online forms, crashing databases and understaffed phones — trying to receive what they were promised.

Meanwhile, there are no plans to address the most glaring problem: hunger. Food lines stretch for blocks, and food pantries are completely overwhelmed.

It is estimated that more than 2 million people in New York City go hungry — a quarter of the population. In the Bronx, it’s even worse: One-third are hungry. A patchwork of over 1,000 emergency food programs, including soup kitchens, food pantries and bag lunches provide limited and uncoordinated relief.

Capitalism intentionally breaks down social cohesion. Mass mobilizations, unions and community self-control organizations are a threat to exploitation. Police repression and racism are an essential part of the fabric of this society, used like Krazy Glue to forcibly hold together a crumbling system.

But migrant detention centers are being emptied in a way that spreads the virus globally. Although international air traffic is almost shut down, forcible deportations have been made even to countries that have closed their borders to slow the spread of the virus.

The Trump administration threatens sanctions against Central American countries that refuse to accept nationals who test positive. He is accused of willfully spreading the disease to Central America through deportations. (Salon, April 19)

This decaying imperialist system does make plans. They are focused on elaborate, high-tech military preparations, new missiles, aircraft carriers, supersonic jets and building new bases. This is enormously profitable for the largest U.S. corporations — the military-industrial complex and oil giants that are linked to the largest banks.

Hostility to China is lucrative for these corporations. Their lobbyists, even in the midst of a pandemic, are demanding new funds and more plans.

The U.S. ruling circles have always been hostile to the revolution that transformed China and broke neocolonial domination. Their hope was that capitalist penetration of China would overturn this accomplishment.

Now that their hopes of regaining control of China’s enormous market are fading, the threat of war is growing.

Beginning in 2010, the Obama-Clinton “pivot to Asia” signaled a determination to reassert U.S. dominance. The plan was to surround China with reinvigorated military alliances and new batteries of missiles. There was bipartisan consensus from the beginning to increase naval confrontation in the South China Sea and heightened subversion from Hong Kong to Xinjiang, while stoking a trade war. Endless commentators have described this as the new Cold War.

The Pentagon’s recent announcements of new nuclear tests, mass production of thousands of hypersonic nuclear missiles and U.S.-commanded war games in Europe and the Pacific are an ominous escalation.

In reality, it is a conflict created by an outmoded and decaying capitalist system that is confronting a new form of social cooperation and collective ownership that is just beginning to unfold — socialism.