As the coronavirus COVID-19 pandemic wreaks havoc in country after country, causing total shutdowns in Italy, Spain and elsewhere, China appears to be returning to normal. 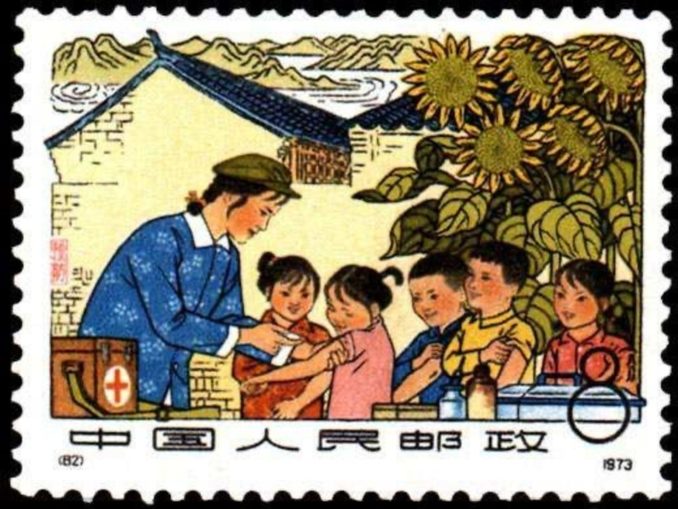 A stamp from China circa 1973 commemorates the “barefoot doctors” who brought health care to millions of rural Chinese people.

China has the largest population in the world — some 1.4 billion people — yet the number of new cases are way down. Many provinces have reported none in weeks. While the government is still cautiously maintaining comprehensive measures to control the virus, the economy and society are slowly starting back up.

China’s response to the epidemic involved unprecedented quarantines of tens of millions of people. Schools, factories, malls and sporting events had all been quickly shut down or canceled when the country’s confirmed cases still numbered only in the hundreds, not thousands.

The virus first emerged and spread in the city of Wuhan in Hubei province. While battling back the virus, the government successfully contained cases in every other province.

This gave other countries several precious weeks to prepare for outbreaks of their own, yet the results have been mixed. Europe and the U.S. in particular were wholly unprepared. Iran, under strict U.S. sanctions that significantly impact its ability to manage a public health crisis, has become the site of a large outbreak, with many deaths.

While initially caught off guard by this new pathogen, China has still managed to bring it rapidly under control and severely limit its spread. Why was China able to do this when Western countries that are much more economically developed have failed to do so?

Part of the reason has to do with the basic socialist structures established in China after the triumph of its revolution in 1949. Torn apart by World War II, China had endured a “century of humiliation” in which imperialist powers divided up the country among themselves to oppress and exploit its people and resources. But mass mobilizations after the revolution eliminated the underdevelopment and poverty inherited by the government of New China.

For the first time, millions were vaccinated, taught to read and write, and given education in trade schools and universities. The famous “barefoot doctors” — thousands of volunteer medical workers — fanned out across the countryside to the remotest villages and settlements to provide people with free medical care for the first time. The barefoot doctors created detailed medical charts and records for each of their patients, meticulously tracked their health conditions and recorded treatments.

Life expectancy during the Mao era nearly doubled as a result of this and other measures that prioritized the health of the people.

World war and imperialist oppression had created tremendous challenges and underdevelopment. Nevertheless, the strength and organization of the Chinese people, led by the Communist Party, enabled them to overcome obstacles in a very short time. China is now the world’s second-largest economy and has essentially eliminated extreme poverty.

Even though the U.S. has less than one-fourth the population of China and a more developed economy, it actually has more poor people today than China does. Why? Because after the Great Recession of 2008 plunged many nations into chaos for years to come, China directed vast amounts of its state resources to end mass unemployment and poverty.

Unemployed workers in the export sector were retrained to work on infrastructure projects. They built the world’s largest high-speed rail network. The state-owned banking sector remained stable, and the country never faced a debilitating recession, as happened in the West.

A study published in the September 2015 issue of Health Policy, a peer-reviewed medical science journal, reported: “Universal health insurance coverage is rarely found in developing countries. That is why international experts are greatly impressed by the universal coverage recently achieved by China, the world’s largest developing country with 1.3 billion population. For example, a World Bank report praised China’s achievement as ‘unparalleled,’ representing the largest expansion of insurance coverage in human history.”

In the West, austerity measures have slashed public health budgets, reducing the number of beds and critical medical devices in hospitals and clinics. Public health systems in many Western countries have still not recovered from the austerity measures implemented over a decade ago, setting them up for the catastrophic situation currently unfolding today.

China now has a firm economic base with significant levels of state planning and ownership that allow it to prioritize the basic needs of the broad majority of its people. Without that, the situation in China would look much worse today.

Some 70 years ago a great revolution based in its working people created the necessary conditions for China to stand up. Despite hostile attempts by the U.S. ruling class to undermine it, the People’s Republic of China will prevail.