March 15 — The Pentagon’s plans to practice war conflicted with the spread of COVID-19 this week. While the virus was unable to stop all aggression from the U.S. imperialist Armed Forces, it presented an obstacle to some of the planned maneuvers. 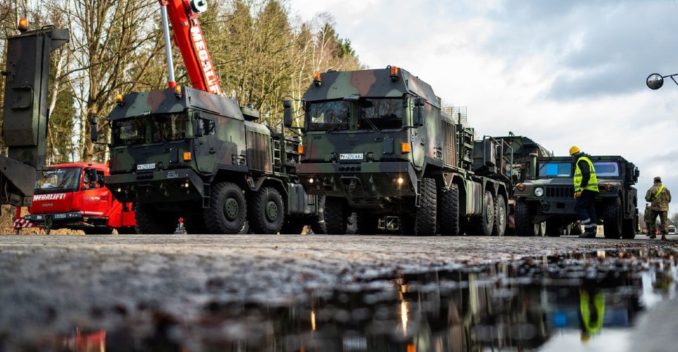 Plans to hold war exercises called “Defender Europe 2020,” which involved some 30,000 U.S. troops and 17,000 more from European NATO members, have been scaled back. These U.S. troops were to move across Europe, even as the U.S. president barred Europeans from entering the U.S.

“After careful review of the ongoing Defender-Europe 20 exercise activities and in light of the current coronavirus outbreak, we will modify the exercise by reducing the number of U.S. participants,” European Command (EUCOM) officials said in a press release. (Army Times, March 11)

The exercise involved sending 20,000 U.S. troops to march through Europe to the Russian border, bringing heavy weapons and vehicles, and then return to the U.S. Some of the troops had arrived before the orders came to scale back; other U.S. troops were already in Europe. While its planners gave this exercise a harmless-sounding name, Defender Europe 2020 is an obvious threat against Russia.

Even if they fall short of provoking a war, these exercises threaten to spread COVID-19 throughout European countries as troops come into contact with civilians. Now Washington says it will no longer send the 20,000 additional troops. The war maneuver continues at a lower volume.

Another aggressive war exercise set for Norway, called “Cold Response,” has been postponed due to the COVID-19 crisis.

While the U.S. is bringing weapons to Europe, including to Italy, China has brought a different kind of material to the quarantined Italian peninsula. On the morning of March 13, a team of nine experts from the People’s Republic arrived at Rome’s airport to assist Italy’s fight against the virus. They brought with them 31 tons of medical material, mainly protective clothing and intensive care equipment, including ventilators.

China is the world’s main manufacturer of surgical masks, fitted respirator masks and ventilators. While China stopped exporting these materials during the peak of COVID-19 infections in Wuhan, it is now resuming exports, and has provided aid to those countries hit hardest by COVID-19. Another two countries China has aided are Iran and Iraq.

U.S. imperialism has continued to contribute to hardships for the people in both Iran and Iraq. Washington’s sanctions against Iran damage its health care system and contribute to unnecessary deaths. In Iraq this week, the U.S. carried out a rocket attack on troops connected with the Baghdad government.