Chile has witnessed a week of renewed protests demanding the resignation of billionaire President Sebastián Piñera and calling for a Peoples’ Convention to scrap former dictator Augusto Pinochet’s 1980 neoliberal laws, replacing them with a new Constitution. On March 8 — International Working Women’s Day — more than a million people demonstrated in Santiago and elsewhere. 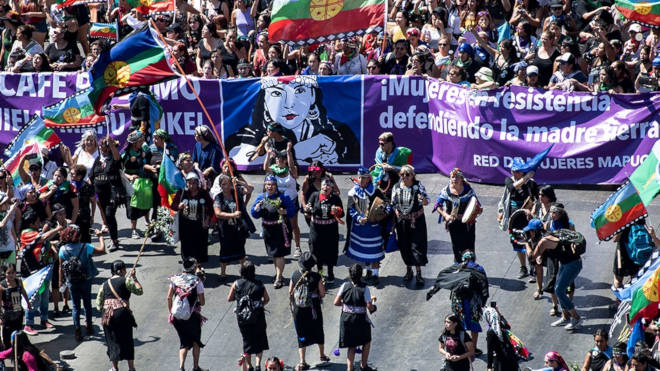 Reporter Alisha Lubben in the  March 8 Chile Today News described the massive event in Santiago: “The streets were electric with the voices of over one million women. Along the metro ride to Santa Lucia, cheers and chants permeated into the stations and grew louder and more enthusiastic with each stop.

“Exiting the metro station, reaching the march was nearly impossible as even side streets and alleyways were brimming with women and children. Demonstrators clad in body paint and green bandanas brandished flags and carried banners that displayed messages regarding gender inequality, domestic violence, legal abortion and anticipation of better opportunities for future generations.

“At the front of the line, marchers clashed with police barriers, water cannons, and tear gas. A sign of unity and the true nurturing nature of women, onlookers rushed to the aid of those who had been teargassed with water, lemons, and tissue paper. The fight for human rights and equality marches on in Chile, with women at the forefront of the resistance.”

On March 9, in general strikes demanding that Latin American governments act to improve their living conditions, women around the region stayed home from work, school and universities to show what daily life would be like without their input. Millions of women participated in Chile, Argentina, Colombia and Mexico.

Called by 8M Coordination, the strikers demanded equality and the elimination of patriarchy. “This will be a year of mobilizations where women will be the protagonists,” said Javiera Manzi, a Chilean 8M Coordination spokesperson.  “We’ll take to the streets in full exercise of our rights. We went out to end this government from the front line.” (telesurenglish.net, March 9)

The March 8 demonstrations were a prelude to a national strike called for March 11, the second anniversary of Piñera’s election. Strike actions included a halt to all activities beginning at 11 a.m. for 11 minutes. “Super Friday” protests were held March 13 to commemorate the five months of protests that began in October 2019.

Beginning in mid-October, and continuing every Friday since then, Chileans have demonstrated against Piñera’s neoliberal policies that have turned Chile into one of the most economically unequal countries in Latin America. The protests were initiated by youth over a 3.75 percent increase in subway fares. They quickly spread from Santiago to other areas despite brutal government repression.

When the youth fought back, they gained the support of the Chilean working class.  After a week Piñera was forced to rescind the fare increase.

The Chilean transit protests, in which youth jumped over turnstyles, inspired similar actions by thousands of youth in New York City that began November 2019 against transit police brutality.

Since October, police in Chile have murdered at least 27 demonstrators; blinded over 500 people by shooting pellets, bullets and gas canisters at their eyes; injured almost 4,000 people; and arrested nearly 10,000, including children and youth.

Chile’s Institute for Human Rights estimates that 439 women were among those injured. Six have filed complaints against police for sexual assault.

The 150 days since mid-October have witnessed the largest demonstrations since the fascist coup, led by Gen. Augusto Pinochet in 1973 with U.S. backing, which crushed the progressive government of President Salvador Allende. Now thousands of people are uniting their voices to demand the end of the current Chilean government, with popular slogans like “Piñera, murderer just like Pinochet.” ​​​​​​​

Chile’s political and social organizations have called for a new wave of protests throughout March, leading up to plebiscites on the new Constitution to be held on April 26.