This edited talk was given at a March 12 Workers World Party branch meeting in New York City. 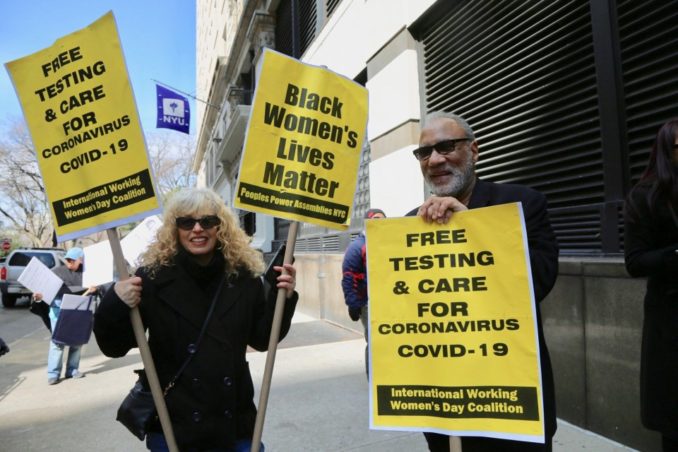 It is entirely possible that we are at the beginning of what could be the most serious and consequential economic and political world crisis that our party and the working class have ever faced. I underscore possible. There is no way to state emphatically that is the case. But the potential magnitude of what is happening with the economy and its intersection with COVID-19 is unprecedented, extraordinary and historical.

We are in “uncharted waters,” but they shouldn’t be so uncharted for revolutionary Marxists who have any grasp of theory, because in many ways we saw this coming and should have prepared for it. Our movement, even the vanguard, has been ideologically weak and has not prepared for it; it thinks things are going along the same way they’ve been going.

Everyone should read comrade Deirdre Griswold’s excellent March 10 article in Workers World newspaper, “Did COVID-19 cause the Wall Street crash?” at workers.org. It’s required reading for every member and person who takes our party seriously because there is a lot of discussion about these events in the bourgeois media and all over the internet, including on Facebook. The ruling class is divided but has its own line.

We will be searching for clarity on the political significance of what’s going on and what it means for the class struggle. Revolutionaries and progressive people have a serious interest in doing so. If we don’t, there will be a lot of confusion, which can only benefit the capitalist ruling class. There is danger in a number of aspects of this crisis, particularly this one.

The main thing on everyone’s mind is the coronavirus and its enormous impact on society. There is fear. Measures are being taken on a personal level or at a governmental level — or on a world level — which is how they should be coordinated. But capitalism as a system is anathema to that because the imperialists can’t coordinate because they are fighting and competing with each other. This is part of the anarchy and bankruptcy of world capitalism and imperialism. This will become clearer.

What may become the main aspect about the coronavirus is that the government is closing things down. No assemblies larger than 500 people are allowed in New York. We know what our governors and mayors are saying.

I want to concentrate on the economic crisis. This virus is an enormous catalyst which has had a huge impact on the global economy for many reasons. It’s not the underlying reason for the financial collapse on Wall Street, but it is the catalyst. It‘s as if the system was waiting for something — a war, political development, bank failing or a country going into debt — to unravel. This system with massive overproduction is just waiting to unravel.

The financial system has been on life support since 2008 when the big financial crisis happened. The central banks and the ruling classes around the world were so frightened by the prospect of a collapse of the entire capitalist economy that they all have agreed to do everything, including taking trillions of dollars of the workers’ money and pumping it into the financial markets. But that’s a phony remedy, and it’s running out of steam now.

The New York Stock Exchange had to halt trading earlier on March 12 in the financial markets because the major markets fell more than 7 percent. It’s the second time they’ve done this within a few days. That’s when the Federal Reserve Bank had an emergency meeting and released a statement saying they were going to pump $1.5 trillion starting tomorrow into the markets. That didn’t stop the collapse.

But the Federal Reserve Bank had other things in mind. They’re in touch with all the central bankers, the CEOs of JPMorgan Chase, Citibank, the Bank of America and Christine Legarde, president of the European Central Bank. They are in a panic and trying to prevent a worldwide crash of the markets, of the capitalist economy.

Bankruptcy doesn’t just happen in small- and medium-sized companies, but it happens in big multinational companies and banks fail. Banks are supposed to be “solvent,” but that is not true. That’s just on the surface. In reality, there is so much debt in the financial market that everything associated with it is swimming in debt. It’s hidden. But we’re going to see it now, more so than ever, perhaps even more than we saw it 12 years ago during the 2008 financial crisis.

We will hear the word “recession.” The capitalists have been trying to run away from that, to avoid it. They may say Europe is going into a recession; maybe the developing countries are going into it, but not the U.S. They will predict a recession.

That word isn’t severe enough. I think we’re potentially going into a countrywide, worldwide crisis that can’t be defined properly by the word recession. It’s coming at the end stage of historic capitalist development. There has to be a better, more accurate and truthful definition of what is happening. It may well be the biggest crisis the world has ever seen. Again, that is a preliminary thought that needs to be supported by developments.

They’ve got another problem: The world imperialist ruling classes were cooperating 12 year ago. During the oil crisis, the central banks, prime ministers and presidents were all cooperating. But we know Trump is about letting the U.S. go it alone. Whether the banks will find a level of cooperation — or whether the financial establishment will demand the imperialist governments cooperate more — is part of the political struggle.

It is the U.S. that is competing with every country, not just China. That’s a new development. It’s not just Trump; he represents a section of the ruling class that says cooperation has been okay for the 80 years since we won the second imperialist war. It did some good, but it’s not helping us now.

So the capitalists say, “Let’s take off the gloves.” This struggle is going on within the ruling class. Trump represents one part of the ruling class, as opposed to those who want to support the imperialists’ global institutions and cooperate more. This means we can expect an escalation of the war on the workers and the oppressed.

We have been fighting around issues such as Medicare for All and cancelling student loans — and on the issue of growing inequality, which has always been there, but has never been greater. Today, those developments have radicalized workers, particularly young workers, but not just them. With this new economic crisis, it’s likely mass layoffs will come, more austerity, more homelessness and more people starving. People who live paycheck to paycheck and don’t have $500 in case of an economic emergency are being pushed off a cliff. There will be more and more of that on a global basis. We will pay a lot of attention to this — and rightfully so.

Working-class demands for health care and paid sick leave will come out of the coronavirus crisis. We’re going to fight around their issues — against evictions, against workers losing their homes and for health care. If we can, we will have demonstrations around the health crisis.

This crisis will create an opportunity for workers and oppressed people in the same way that it did in the 1930s around the world, in Europe and here. It’s good to be reminded of that. While history doesn’t repeat itself 100 percent — and today there are different developments and everything is bigger — there’s an aspect of it that will repeat itself in some of the political crises that will develop for the working class and revolutionaries in the working-class movement who are trying to lead it out of capitalism toward revolution.

They may be the same issues that faced the socialist and communist parties, the revolutionary movement and the entire working class during that incredible, historic period 80 years ago.

I’m optimistic that as revolutionaries we will find a way to minimize insignificant differences and small-thinking sectarianism and whatever other obstacles there are to the kind of unity and revolutionary vision required for the future — for taking the road to revolution. I’m optimistic we’ll get there, but I am sober about it as well and apprehensive because the working-class movement is weak ideologically and organizationally.

We have not been preparing for this, and I’m not just speaking about our party. There will be a learning curve within the revolutionary movement. We will be trying to catch up to meet the level of the global crisis. It will take a very serious and determined effort on the part of everyone in the world movement who is serious and determined.

So I leave you with the main thing we can talk about — what’s happening in the financial markets and in other aspects of the economy which are affecting our co-workers, family members and neighbors. That’s very important because that’s how a revolutionary organization orients itself. For us as serious revolutionaries, it’s the key question.