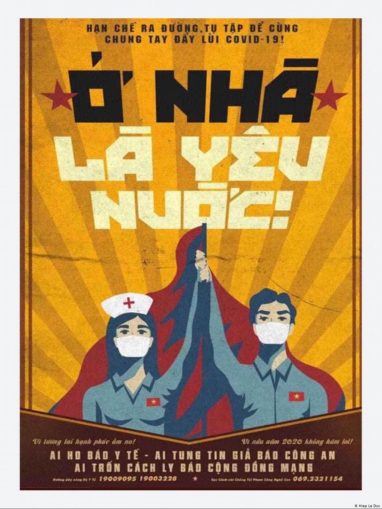 The coronavirus pandemic has started to reveal stark differences in the emergency responses of countries all over the globe. The U.S. now has the most COVID-19 cases in the world after a slow and uncoordinated response by federal and state governments.

Shortages of ventilators, ICU beds and personal protective equipment have put pressure on a medical system that was already struggling to meet basic needs. Especially in rural areas and communities of color, hospital closings and shortages of staff and funding have put many at an elevated risk for the ravages of COVID-19.

Immigration and Customs Enforcement agents are reportedly impersonating medical staff in order to detain undocumented workers, increasing the terror in im/migrant communities and further discouraging migrants from seeking out testing and medical care

Nevertheless, despite the vast wealth and resources at the disposal of superpowers like the U.S., some less developed countries are faring better, including ones under onerous U.S. sanctions

Cuba, China and India’s Kerala state, all led by communist parties that attach great importance to public health and the needs of the people, have much lower rates of infection than the U.S

The Socialist Republic of Vietnam has also mounted a highly successful response, perhaps more so than anywhere else in the world. By April 6, Vietnam, with a population of nearly 100 million people, had just 245 confirmed cases and zero deaths. (worldometers.info/coronavirus/)

New York City, the global capital of high finance, has nearly 70,000 confirmed cases and close to 2,500 deaths out of a population of 8.6 million. What could Vietnam, a country the U.S. tried to wipe off the map 50 years ago, be doing that the wealthiest city in the world’s wealthiest country is not doing

An article published on March 30 by the World Economic Forum, by no means a left-wing group, reveals some answers

Vietnam’s University of Science and Technology has developed a fast and affordable test kit that costs about $15 and returns results within an hour. Now 20 countries around the world are seeking to order tens of thousands of them

Vietnam has also focused on effective, nonpharmaceutical methods to contain the virus. On Feb. 1, it suspended flights to China and decided to keep schools closed after the Lunar New Year break. It then instituted a 21-day quarantine of Vinh Phuc province north of Hanoi, where a large number of residents had worked in Wuhan, China, the initial epicenter of the outbreak

It has since mandated 14-day quarantines for everyone arriving in the country and cancelled all foreign flights. Quarantine centers have been set up on the edges of cities providing 100 percent of the medical care, food and shelter for those in quarantine, including foreign visitors

A British citizen staying at a quarantine center in Son Tay said about the experience: “Suddenly it all becomes very human, we’re guests in a country doing their best to protect themselves and are extending us that courtesy. Such is the good nature of Vietnam. Outside, everything is peaceful. The location is quiet, the soldiers work tirelessly to sterilize the rooms daily, log our temperature and clear out our bins. … So far, this feels more like a holiday camp than a quarantine. In our room, we share snacks, fruit, and start getting deliveries from loved ones.” (VNExpress International, March 17)

These quarantine centers are also available to people who have not traveled abroad. When cases appear in a neighborhood, the entire street is sanitized and the residents put under a two-week quarantine, with the government providing free, fresh food and medical care.

Susan Schnur, a member of Workers World Party who travelled in Vietnam from March 5 to 17, reported that screenings in the airports were much more thorough and stringent than in the U.S. Hand sanitizer was almost everywhere, even in rural areas. People were “chipper” about following the measures set out by the government to contain the virus

Vietnam has also used social media and information technology to combat the spread of the virus. Almost 90 percent of the people have either a smartphone or a mobile phone. The government uses an app and other channels to swiftly alert the public to new cases and areas with potential transmission, to help people get tested and to provide scientifically accurate, up-to-date information on best practices to reduce exposure.

“Imagine a government that’s actually good on social media and inspires a TikTok movement. And, no, screaming all caps in Twitter doesn’t count,” wrote Linh Dao Smooke of the website hackernoon.com.

Between 2002 and 2018, 45 million Vietnamese people were lifted out of poverty. From 1990 to 2015, life expectancy rose from 71 to 76 years. Vietnam now has a higher vaccination rate than the U.S. Medical care is inexpensive, with the government paying 100 percent for poor people and ethnic minorities in disadvantaged areas

Vietnam sets an example for both developing and wealthy countries fighting COVID-19.