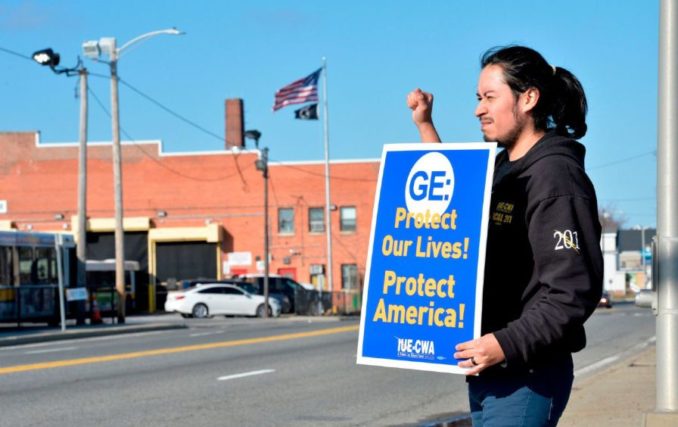 Whether they are organizing walkouts, sick-outs or sit-ins, workers in a whole range of so-called “essential” occupations are in a life-and-death fight against dangerous working conditions during the COVID-19 pandemic.

From shopping to heavy industry

Actions include gig workers, like the Instacart “Shoppers” who walked out on March 30 all over the U.S. Their demands are basic: personal protective equipment,  soap and sanitizers. They also want $5 per order “hazard pay,” along with “income replacement” pay for anyone with a doctor’s note or a preexisting condition making them vulnerable to infection. Instacart has denied most of these demands made by Gig Workers United.

Shoppers, who customers pay to go to a supermarket and shop for them, are classified as “independent contractors” and not even covered under existing worker protection laws. In fact, they are super-exploited workers. They are angry at Instacart’s announcement it will hire 300,000 more shoppers in the midst of the pandemic while refusing the safety demands.

General Electric workers in Lynn, Mass., held work stoppages and protests outside the plant, calling on GE to hire laid-off workers to make much-needed ventilators. They are demanding safe working conditions and additional paid sick leave and have a petition for supporters to sign. In this time of mass unemployment, they are still working because military equipment produced in the plant is deemed “essential.” (Local201.org)

Their union, the Union of Electrical Workers-Communication Workers (IUE-CWA), held a solidarity action with the Lynn workers outside GE’s corporate headquarters in Boston. The company — which had $95 billion in revenue in 2019 and is slated to get a slice of the fed’s multitrillion dollar bailout — can well afford to retool its plants to make more ventilators than GE currently manufactures.

“If GE trusts us to build, maintain and test engines, which go on a variety of aircraft where millions of lives are at stake, why wouldn’t they trust us to build ventilators?” asks IUE-CWA Local 86004 President Jake Aguanaga. His plant in Arkansas City, Kan., has more than half its workforce on indefinite layoff. (Vice.com, March 30)

Often when workers demand safe conditions, bosses retaliate. After learning that a coworker had tested positive for COVID-19, Travis Watkins, who worked for a third-party contractor at a General Motors plant in Grand Rapids, Mich., warned workers their jobs were unsafe. For his stand — “A safe working environment is a basic human right” — he was fired on March 18. (tinyurl.com/sohclk4)

Food processing plants, which exploit many migrants and workers of color, were already notoriously dangerous before COVID-19. Now they are death traps with little or no sanitation, few breaks to allow hand-washing and people working elbow-to-elbow

These conditions prompted a walkout April 3 at the Pilgrim Pride poultry plant in Timberville, Va., after workers learned an employee there tested positive. Workers want the plant shut down for two weeks to allow the worker and anyone who had contact with them to self-quarantine. They want PPE, which the company has refused to provide.

The same day another walkout took place at Raymundo’s in Chicago where several hundred workers, mostly Latinx women, make flan and gelatin. They won union recognition last year with the Food and Commercial Workers (UFCW) and are now also demanding paid time off and a safe, fully disinfected workplace to come back to.

Earlier, on March 31, some 1,000 meatpackers walked off the job in Greeley, Colo., for similar demands. While this largely immigrant workforce speaks 27 different languages, the members of UFCW Local 7 came together in unity.

The push to close unsafe, nonessential construction sites is continuing, with 13,000 union carpenters in Massachusetts on strike. Construction workers everywhere are being told they have to keep working on a range of building projects exempted from governors’ stay-at-home orders. The director of Chicago Women in Trades: National Center for Women’s Equity in Apprenticeship and Employment, Lauren Sugerman, stated in a letter to Illinois Gov. J.B. Pritzker: “Building a casino, a luxury condo, a high-rise office building, a sports arena, school or commercial building is not essential during a pandemic such as COVID-19.” (coshnetwork.org)

On the frontline of the crisis — and the struggle for safety

Kroger pharmacy workers had a safety walkout in Morgantown, W.Va. They also hung plastic curtains to create a barrier between themselves and potentially infected customers, which the company ripped down. After the walkout, Kroger installed plexiglass sheets, but workers still need gloves and social distancing and are demanding hazard pay.

Health care workers have been staging sit-downs at Chicago’s Cook County Hospital, the busiest in the state. They want PPE. Represented by National Nurses United, they serve the most underserved population — the poorest, who are often also people of color, and the most likely to not have health insurance. Chicago has one of the highest numbers of COVID-19 cases and deaths in the country.

Dozens of nurses walked off the job at Brighton Rehab and Wellness Center in western Pennsylvania’s Beaver County after learning that 36 residents and six workers had tested positive. They had not been given N95 masks to wear. Their union, Service Employees Union (SEIU) Healthcare Pennsylvania, says the walkout will continue until its members are provided the necessary protection.

While health care workers risk their lives, the Trump administration, acting at the behest of the for-profit American Hospital Association, killed a provision in the recent stimulus bill to force the Office of Safety and Health Administration to create an emergency rule setting COVID-19 safety standards for health care workers.

But the workers aren’t backing down, as NNU began a strike April 6 at 15 hospitals in six states run by the international chain HCA Healthcare. The union is calling HCA out for its “lack of preparedness” in failing to provide PPE to frontline workers.

Others walking out include auto dealership mechanics in New York City and Amazon workers in Detroit, Chicago and New York. (See related article this issue

From health care workers to gig workers to warehouse workers, the working class is rising up in a fight for their lives.