Chris Smalls is a former Amazon worker who was fired for organizing a March 30 walkout at the JFK8 Amazon facility in Staten Island, N.Y. Bosses refused to close the facility despite confirmed cases of COVID-19 among the workers. In the aftermath of Smalls’ wrongful termination, a leaked memo from Amazon executives revealed the billion-dollar company’s intent to launch a racist smear campaign against him. Smalls spoke to Workers World’s Ted Kelly by phone on April 5. 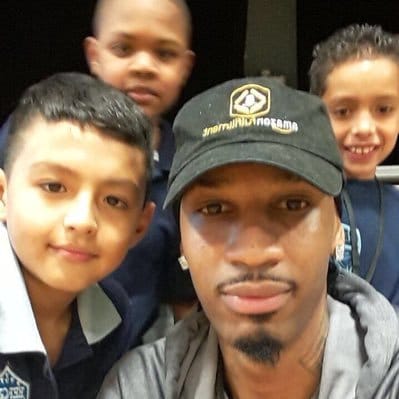 Chris Smalls with his children.

Workers World: Can you tell us about the events leading up to the March 30 walkout?

Chris Smalls: Amazon wasn’t prepared for this pandemic and that’s the real issue.

In the beginning of the month it started out as rumors: “Somebody’s out sick with it.” “Somebody tested positive.” It was always rumors, rumors, rumors. But in every rumor there’s a little bit of a truth. I don’t play when it comes to health and life and death. So I escalated it to Human Resources and said, “I heard that you sent some managers to Seattle a couple of weeks ago. I heard that one of them came back and left early because they were sick. That’s a red flag for me.”

Seattle was the epicenter at one point in time. I’m not trying to say that they brought the virus and were Patient Zero here, but you want to be ahead of the game.

My senses are heightened now. I’m seeing my associates get sick. I’m seeing my coworkers calling out more frequently. That’s frightening for me. So I started taking days off.

I was taking off so many days, I had nothing to do but watch the news. I became a student [of the situation]. I was watching this pandemic on TV and seeing the numbers going up every day. I was watching it get closer and closer to New York. I thought: “We work in a high-density populated area; it’s possible that this virus is in my building. We have 5,000 employees who come in and out of this building weekly from all over the tri-state area.

That’s what transpired before we had a confirmed case, before I returned to work on Tuesday [March 24]. I had to have money to pay my rent on April 1. I had already depleted all my options: unpaid time, paid time, vacation time, I used it all. I took money out of my 401k as well. I had to go back to work.

That morning I ran into a colleague. She looked extremely sick. Her eyes were bloodshot; she was fatigued. She told me she was sick and that she went for testing. I told her, “You have to go home. Don’t even stay here. Go home.” She went home.

Two hours later we had a managers’ meeting where I learned we had our first case from someone who had tested positive, but hadn’t been on the premises in some weeks. The Queens [Amazon] facility had closed down, they sanitized everything, and they gave everybody pay just a week prior. I was expecting us to do the exact same thing. I was sadly mistaken.

It was business as usual. They said, “Don’t tell the associates. We don’t want to cause a panic.” That was my last time working for Amazon.

[Derek Palmer — who I ride to work with–and I] started working behind the scenes. I was sending out emails to the CDC, the Health Department, the State Department, the governor’s office. You name it, I did it. I contacted every media outlet. The media were just brushing me off. And I thought, “I can’t just stay home again for any number of days and let people get sick.”

They say I violated multiple guidelines – no, they did! Their policy is flawed. It allows people to come to work sick because you don’t get confirmed quarantine pay until you get documents from the doctor. My coworker tested positive the next day on Wednesday [March 25]. Thank God I came in on Tuesday and sent her home. Imagine if I didn’t! She would have been around my associates for another ten hours. She’d been there all week, already exposed to hundreds of people.

I came to the building every single day, off the clock, sat in the building for eight hours a day. We walked ten people into that HR office every day to raise their concerns.

As soon as my coworker texted me and said she tested positive, I ran to the office and told them “I’ve been exposed and all my employees have been exposed as well. You have a huge department that’s all been exposed. You need to close the building down. Immediately.”

They had a bunch of excuses. They said they’d talk to the regional managers. They said they had to review the videotape to see who she came in contact with. I thought, “Wow, you’re really gonna review tape right now when I’m telling you I’ve been exposed?” I went home and kept at it. I was sending out more emails, telling everyone I could: local police department, OSHA. I did it all.

I learned people protested at a Kentucky building and the government shut them down until April 1 — with pay. I went back in on Thursday [March 26]. Management told me that didn’t happen, that’s not true. The employees didn’t actually protest; the government shut it down. I said, “This is your building! You’re the site leader. Close it down.” I brought 10 more associates in. Nothing  was getting through to them. Another day wasted.

By Friday [March 27] I was done being nice. I had people wait in the cafeteria while I went into the office by myself, and I pretty much had a full-blown argument with the site leader and the head of Human Resources. They printed out the CDC guidelines. They accused me of insubordination. They were just avoiding what the real issue was.

Then I went on my internal communications, Amazon Chime, where we text the operations managers. I see one of the ops managers is telling the supervisors to lie to the associates and offer VTO [voluntary time off]. I said, “Wait a minute – we’re an essential business; we’re on mandatory overtime. You’re going to voluntarily send people home? Why?” He said, “Tell them there’s a bottleneck downstream and we don’t have any trucks.”

They were trying to reduce the workforce just in case the CDC showed up, so they’d be in compliance with CDC guidelines.

WW: So they were coming up with their own narrative to protect their liability?

CS: Exactly. And they were already preparing for some kind of protest. So I walked out.

I went back Saturday [March 28] at 7 in the morning and went to the cafeteria. The same thing I’d been doing every day. That’s when they quarantined me. Now they didn’t even quarantine the person I drive to work with every single day! I’d been in their offices all week — they didn’t quarantine themselves! Nor the other employees I’d been dealing with for hours. None of them. Just me alone.

WW: That’s such an obvious set up.

CS: Blatant. So Derek and I went home. We had to do something drastic. I kept calling the media and the New York Post finally answered the phone. I told them we were having a walkout on Monday [March 30]. I had 24 hours to put that together. The Post published it, and.now all the media outlets that had been ignoring me, they’re calling my phone. I put the world on notice to come to JFK8 on Monday.

Everything from the timing to the weather was planned out. I saw the temperature was going to be 65 degrees; it was going to be nice out. I said, “Let’s do it at lunchtime.” I was gonna give the world a walkout and that’s exactly what I did.

But I’m not “smart” or “articulate” though. [Laughs] 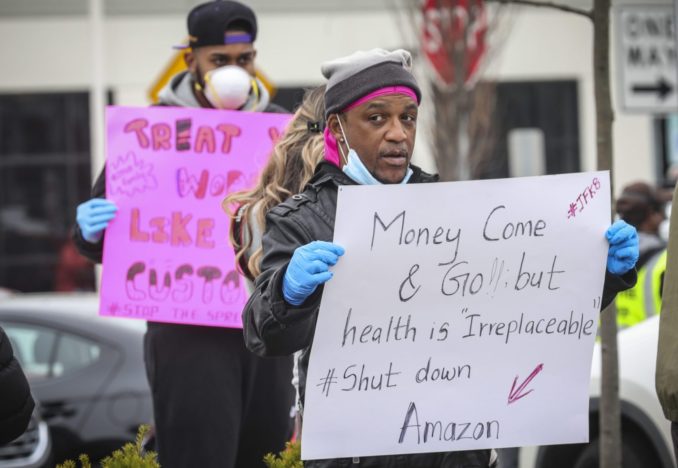 Amazon workers walk out of the JFK8 facility in Queens, N.Y., on March 30.

WW: Let’s talk about that leaked memo from Amazon executives, where they said you were not “smart” or “articulate.” Do you think racism played a role in you being targeted?

CS: I definitely ran into racial profiling working for Amazon. This was actually the second time I had been terminated. I’m somebody who has put up with a lot of bullshit over the last five years. Especially being an African-American supervisor.

When I was at Amazon in Connecticut, they were cracking down on managers stealing company time. I’m not even salaried at the time, I’m hourly, so I have to “labor track” my every move. Managers don’t have to do that.

There’s definitely some racism amongst the company. I was targeted by this company way before this situation.

WW: In the powerful open letter you wrote, you said, “Amazon thinks we are expendable.” Could you explain what you meant by that?

CS: They fired me during a pandemic. They don’t give a damn about my livelihood, my three kids I have to feed. I can’t get unemployment right now because [the application process is] so crazy, and [Amazon is] probably gonna contest it anyway. I have a friend who’s been sleeping in his car for five days because he’s sick, he can’t get a damn test, and he don’t want to bring [the coronavirus] in the house because he has three small children and a wife.

Raising wages $2? That’s a slap in the face. I really didn’t understand what their mindset is, but I do now. It’s pure evil and pure greed. They really don’t give a damn about people. They’d rather see their whole workforce die.

God forbid 800,000 Amazon employees become carriers of this virus. If each of them spreads it to two or three people? Everyone is now in six degrees of separation. There’s an Amazon building in every major city in every state. There are 5,000 of us in one building. We’re the epicenter in New York City. We’re coming from all five boroughs, taking the subway and bus every day. And they’re hiring on top of that people who are undiagnosed!

You wanna flatten the curve? Shut it down. There’s your solution. You need hospitals? My Amazon building alone will hold 14 NFL football fields.

WW: And yet they’re building field hospitals in Central Park.

CS: Exactly. You got these doctors and nurses working out of tents. These billionaires need to be ashamed of themselves. Shut your network down for three months. Pay your employees. Send your money to the medical field. How hard is that?

WW: They’re not willing to sacrifice their profits.

CS: They’d rather see people die, see their money stack up, and build a spaceship.

WW: You ended your letter with the words, “We’re starting a revolution and people around the country support us.” What does this revolution mean to you and how can people support it?

You wanna help us practice real social distancing? Stop clicking that “One Click Buy.” Simple. Why not shut down this Amazon network and let our people volunteer to help the grocery stores with pay? Why not? We can do that!

WW: Is there a campaign to restore your job? Would you go back if you were offered a job?

CS: Hell no. I told them the same day they fired me: Keep that shit. I don’t ever want to work for a man that don’t care about people. Ever.