Breonna Taylor was a 26-year-old, African American emergency medical technician, whose life was tragically cut short by a hail of an estimated 32 bullets fired by white police officers in Louisville, Kentucky, on March 13, 2020. Ms. Taylor was in her bed, when the officers used a “no-knock” warrant to invade her apartment for so-called drug possession. As it turned out, the officers had the wrong apartment.

Taylor’s partner, Kenneth Walker, attempted to defend himself and her from the police with a licensed gun. He was arrested but later released.

The police who invaded the apartment were never arrested or charged with anything more serious than “wanton endangerment,” when some of their bullets were lodged in Taylor’s next door neighbor’s apartment. It took the public execution of George Floyd in May 2020, as well as local protests, to help bring national attention to Taylor’s murder. 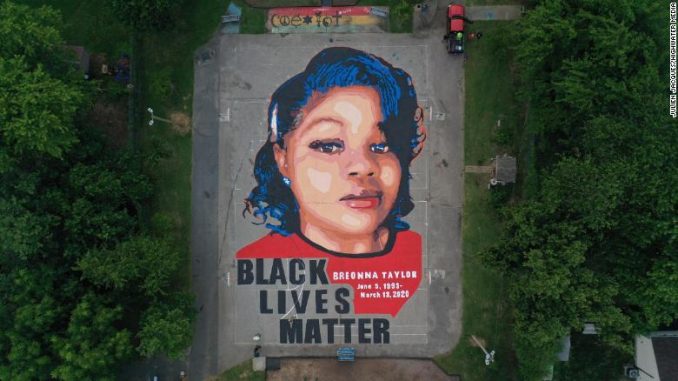 Mural honors the memory of Breonna Taylor in Annapolis, Maryland.

Over two years later on Aug. 4, the officers Kelly Goodlett, Joshua Jaynes, Kyle Meany and Brett Hankison were arrested and charged with civil rights offenses, unconstitutional use of force, obstruction and conspiracy — on a federal level. One of those charges includes falsifying an affidavit for the warrant that led to Ms. Taylor’s death.

Benjamin Crump, a prominent civil rights attorney representing Ms. Taylor’s family, stated in response to the charges: “This day is about (Taylor’s mother Tamika Palmer), her family. It’s about Breonna and all the other Breonnas across America. The Black women who have been denied justice throughout the history of this country, when they have been abused, assaulted, murdered, raped and disregarded. Because of Breonna Taylor, we can say this is a day that Black women saw equal justice in the United States of America.” (kentucky.news, Aug. 5)

Just to be clear, these federal charges are just that, charges. Whether these charges will actually lead to convictions is anybody’s guess. It took more than two years just to bring about these arrests. A secretive grand jury refused to consider any murder charges against these killer cops, because the laws under capitalism protect their lawlessness and brutality, especially when Black, Latinx and other people of color are the victims.

At least 50 Black women have been killed by the police from February 2015 to March 2021, and not one officer has been convicted of their crimes. (insider.com/black-women-killed-by-police-database-2021-6) This number includes Breonna Taylor, showing once again that losing her life to state-sanctioned violence is not an isolated situation.

In order to win real equal justice for ALL the Breonna Taylors, we must not only abolish the police but abolish the system that perpetuates their terror — capitalism.