Fiddling while the Northern Hemisphere burns, roasts, melts and drowns. That’s what is going on in Washington, D.C., now. (In a few months, it will be the turn of the Southern Hemisphere, which is now experiencing winter.) 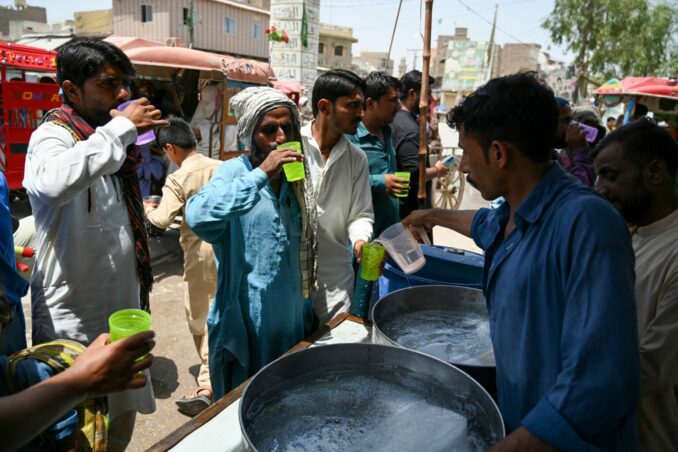 If global warming/climate change has remained abstract up until now, this summer has brought its meaning home to billions of people, who now have glimpsed the future. And rest assured, there is worse to come.

Worse, in many places these record-breaking temperatures have continued without respite for days on end. In Austin, Texas, temperatures were over 100 F for 54 days. In Jacobabad, Pakistan, 121 F temperatures combined with high humidity made working during the day deadly.

Hundreds of millions of people must endure without air conditioning, some because these temperatures are unheard of where they live, and some even lack electricity to run fans. Many more lack air conditioners because of poverty, lack of power or because their housing structures are inadequate to support these cooling units. Worse still, millions of workers must continue to work despite sweltering heat, because their livelihoods are at stake.

In some areas of the world, climate migrants have already left their traditional homes in search of more habitable lands.

It is not only very high temperatures that are causing great suffering. There have been devastating wildfires in France, Greece, Portugal and the Western U.S. And France, Portugal and the U.S. West are experiencing long-term and widespread droughts. Floods have raged in Kentucky and in South Asia, as a result of greater and more frequent storms.

The intense heat waves have caused road surfaces to melt. Forests are lost to fires and to pest infestation. Hundreds of thousands of homes and millions of acres of crops are burned; water supplies dry up, and wildlife is driven from traditional habitats. Soon hurricanes will be blowing through the Caribbean and the North Atlantic.

South Asia is the home of over 2 billion people. Countries in the region include Pakistan with a population of 220 million, India, where 1.4 billion people live, and Bangladesh, in which 165 million people reside. Many people who live in South Asia earn less than $2 a day; if they don’t work, they starve. Most people living in this region are familiar with very hot weather and can usually cope with it.

Beginning in March, earlier than usual, the temperatures in South Asia rose so high that birds fell out of the sky, because the hot air didn’t supply their wings with enough lift. The temperature grew so hot in the spring — the hottest on record in India — that on April 26, the Bhalswa landfill, which handles about half of Delhi’s waste, burst into flames. Thick clouds of dark, noxious smoke filled the air. Previous fires in Bhalswa were quickly extinguished, but this blaze burned for weeks.

Brahmdeep Sindhu, chief medical officer of Civil Hospital located outside of Delhi, told the New Yorker magazine, “We are moving to a hotter, more dangerous world. We have damaged the environment so much. Now the environment is damaging us.” (July 25)

This heat wave ended with torrential rains, which came sooner than the usual summer monsoons and were much heavier. Over 2,000 villages in India were actually submerged. Mawsynram, a village in the country’s northeast, got nearly 40 inches of rain in one day. Thousands of houses, roads, bridges, schools and other public facilities were damaged or destroyed. (Inside Climate News, Aug. 2)

What can be done

These are the weather conditions today. What can be done about them?

Unfortunately, many processes of climate change are already impacting the Earth, with melting of the glaciers and ice sheets, changes in major ocean currents and extreme weather events. These will not end, even if or when the levels of greenhouse-gas emissions stop increasing.

What is the mighty U.S. government — whose main mission is to preserve and expand U.S. capitalism — doing about this crisis? Washington’s efforts can be characterized at best as ineffective and late in the game. Take the Inflation Reduction Act, now ready for the final vote in Congress.

This package incorporates billions of dollars worth of tax credits and subsidies to rescue the climate and to support “green energy” producers. Yet the hypocrisy and cynicism of this bill is astounding. Forbes Magazine, a ruling-class organ, calls the bill a Faustian bargain: “Tradeoffs in the Inflation Reduction Act of 2022 between climate protections and fossil fuel interests could be dire for offshore wind projects and for solar and wind projects on federal lands.” (Aug. 3)

This legislation is not the result of the normal process of wheeling and dealing by competing ruling-class factions. Instead, the bill is the product of a process that has enshrined provisions within it ensuring the fossil fuel industry’s vast profits would continue, while intentionally hamstringing the green energy sector.

The trick is to tie leases for new wind and solar projects on public land and offshore locations to the granting of leases for guaranteed fossil fuel projects. In fact, fossil fuel leases must be sold in the year before the green projects can be awarded leases. Billions of acres of federal lands the size of entire states must first be offered for oil, gas and coal development!

These giant criminal enterprises are not so interested in new, uncertain investments. This new legislation appears to jeopardize the timely initiation of green projects, which are critically needed now!

The climate crisis is affecting workers everywhere. The Teamsters union, which represents the 240,000 UPS drivers and package handlers, is leading a struggle to get UPS to mitigate the effects of heat on working conditions. A video showing a UPS driver collapsing from the heat in Scottsdale, Arizona, has gone viral.

The workers are calling on the company to provide water in every truck and warehouse and to give drivers cooling neck towels and uniforms suited for hot weather. They demand that drivers be allowed to work at a pace that allows them to take breaks.

Teamsters Local 804, which represents New York UPS drivers, has organized demonstrations to build support for this campaign. Progressive forces should back these workers and build a united fight-back against corporate greed and destruction of the planet.