The author was in Panama City, Panama, on a school trip with her daughter when the national strike to reduce prices began July 1. She combines her observations with research to tell this story.

​​The Panamanian people have won a significant battle. They have been in the streets since July 1 demanding their government reduce the cost of living and necessary goods, whose prices impact the day-to-day lives of Panamanian people. They also demanded the government abandon the protection of neoliberal rules that protect the power elite of the country. 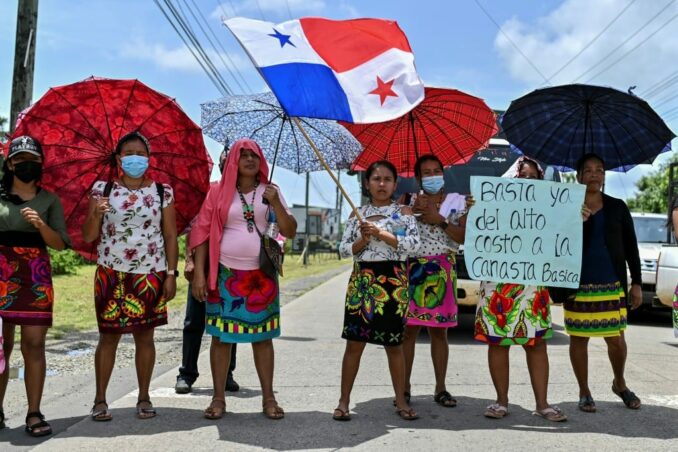 On the day the strike began, from the top of Ancon Hill in Panama City, you could hear a distant chanting that sounded like a protest. It is hard to ignore the stark differences between developed and underdeveloped neighborhoods.

In Panama City, near Plaza de la Independencia there was an “Alto a la gentrificación” (“Stop gentrification”) demonstration. The differences in living conditions from block to block were stark. One block had bars, restaurants and tourist shops. Two blocks away were shanty homes with sheets serving as doors and windows.

Leaders from the People United for Life Alliance, from the capital Panama City; the National Alliance for the Rights of the Organized People (ANADEPO), from Veraguas; and the Indigenous organizations from the Ngäbe Buglé region organized and called the national strike.

The people called for President Laurentino Cortizo’s government to set a price freeze on fuel, medicine and certain other commodities; address the medicine shortage; improve conditions in the health and education sector; increase salary and pensions; repair the country’s public infrastructure; commit to ending corruption; reject U.S. military bases; withdraw its plans to cut 10% of the public sector workforce; and install a voluntary retirement program for public sector employees, among their 30 demands.

It’s evident that the people’s basic needs have been ignored by the neoliberal government, resulting in millions of Panamanians going to bed hungry. The people have suffered from the COVID-19 pandemic and the effects of U.S. and EU sanctions against Russia.

After three weeks of negotiations, on July 24 the regime agreed to a 30% decrease in the prices of over 72 essential goods. The government agreed to support price caps and subsidies on national brands and to strengthen the agency charged with regulating prices and quality of services — the Authority for Consumer Protection and Defense of Competition (ACODECO).

The leadership of the national strike are persistent and note that they are still negotiating the reduction and price freeze on fuel and electricity, the cost and lack of medicine, the 6% allocation of GDP for the public education budget, among other demands.

The people’s demands are just and dignified. They show that the people are demanding an end to neoliberal and repressive policies; and despite the repression, they will continue fighting until they reach victory.