U.S. provocations against China have moved into high gear. Even as the war in Ukraine, instigated by Washington, unfolds with disastrous consequences for European economies and vibrates through the world economy, a more ominous confrontation is planned. 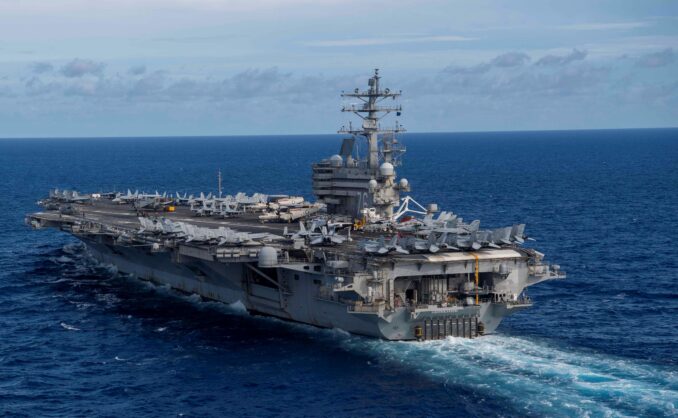 The aircraft carrier USS Ronald Reagan, with its accompanying battle group of warships, a guided missile cruiser, destroyers and nuclear submarines, is headed to the coast of China near the Taiwan Strait. This aggressive show of force is intended as a threat to back up Congresswoman Nancy Pelosi’s announced plan to visit Taiwan.

China has stated strong objection to this open military escalation as a flagrant violation of the U.S.-agreed position that China is one country and incorporates Taiwan as a province.

President Xi Jinping warned U.S. President Joe Biden in a conference call July 28 that “Those who play with fire will perish by it.” Xi called on the U.S. to honor the One China principle to which they had agreed. (tinyurl.com/35wpmymu)

“Don’t say we didn’t warn you” was a July 29 Global Times headline. It is the highest level of warning used in the past before China has taken military action.

“China’s responses will be systematic and not limited to a small scale, given the severity of Pelosi’s actions and the damage to political trust from Sino-U.S. relations,” said Yang Mingjie, head of the Chinese Academy of Social Sciences Institute of Taiwan Studies.

He said China’s response could include “military options and comprehensive countermeasures from the economy to diplomacy.”

Based on the strong warnings from China, it is uncertain whether Speaker of the House Pelosi’s six-person congressional visit to Taiwan goes ahead as part of her visit to Singapore, Malaysia, South Korea and Japan. The purpose of the trip is to reassert an aggressive intervention in Asia and openly challenge the One China agreement.

Pelosi, who ranks third in the line of succession to the presidency, would be the highest-ranking U.S. official to visit the island in 25 years. Pelosi is hardly on a personal trip. The visit is an arrogant challenge to China’s unity and will be backed up by a U.S. aircraft carrier battle group and military jets.

At that time the U.S. was isolated in Asia and all but defeated in Vietnam. This was the motivation to normalize relations — after two decades of failed efforts to overturn the Chinese Revolution through harsh sanctions and military disruptions. The U.S. was especially anxious to drive a wedge between China and the Soviet Union. This division between the two largest but still developing socialist countries was a historic setback for the working class internationally.

Now, 50 years later, U.S. imperialist power is waning. China, Russia, Iran and other countries of the region are increasingly united and able to assist each other when faced by U.S. imperialism’s military threats and new levels of economic sanctions.

The bottom line of the People’s Republic of China in 1972 for normalizing relations with the U.S. was a signed pledge of noninterference in its internal affairs and respect for its sovereignty and territorial integrity.

Of course, like all its agreements and treaties, the U.S. has violated this pledge numerous times through its interference in Hong Kong, Tibet, Xinjiang and Taiwan and its funding under U.S. AID programs to hostile and disruptive movements within China.

Of greatest importance was the inclusion of Taiwan in the Shanghai Joint Communique of 1972, which remains valid today. The United States acknowledged that “all Chinese on either side of the Taiwan Strait maintain there is but one China, and that Taiwan is a part of China. The United States Government does not challenge that position. It reaffirms its interest in a peaceful settlement of the Taiwan question by the Chinese themselves.”

What Wall Street wants to disrupt

China’s planned economy now surpasses the capitalist economy of the U.S. To the U.S. ruling class, efforts to disrupt China have become a priority.

With a population of only 23 million, Taiwan has become a pawn in the struggle to disrupt China. Several cities on the Chinese mainland have larger populations than the island province of Taiwan. Why is disrupting Taiwan so important to Washington’s strategy?

China is Taiwan largest trading partner. It is an important manufacturing center for semiconductor computer chips and other high-tech products that are critical in global supply chains. Taiwan Semiconductor (TSMC) currently dominates the market in the production of the most advanced types of semiconductor chips. Its integrated circuits produce power appliances, cars, laptops and phones. It now makes 92% of the world’s most advanced semiconductors.

None of these advanced chips are currently made in the U.S. Meanwhile, China is putting enormous resources into quickly developing its own computer chips. Breaking this essential supply chain is intended to disrupt Chinese global production. Of course it will be even more disruptive to the U.S. and the European Union. Already, based on aggressive sanctions threats, the U.S. has forced Taiwanese semiconductor companies to stop doing business with major Chinese clients like Huawei.

Taiwan island has remained officially a province of China since 1683 during the Qing Dynasty.

On Taiwan, the Kuomintang forces established what they called the Republic of China, claiming it was the government of all China, and they continue to do so today. But even Taiwan’s constitution claims that Taiwan is a province of all of China. The overwhelming majority of the world, along with the United Nations, officially agree that Taiwan is part of People’s China.

U.S. imperialism, however, has reversed course and is seeking through political and military measures to use Taiwan to destabilize China and provoke a military confrontation.

In 2011 President Barack Obama announced a “Pivot to Asia,” aimed at encircling and containing China. Under Donald Trump, the official position was that the military must prioritize planning for major power conflict with the People’s Republic of China. He took this military hostility to the next level with a trade war.

President Joe Biden has taken it even further, with more weapons sales and aggressive actions. Democrats and Republicans in Congress try to outdo each other in proposing anti-China measures.

The U.S. military presence in Taiwan doubled last December — although not included in counts are U.S. Green Berets training Taiwanese soldiers; other U.S. advisors and contractors involved in weapons placement, technical assistance and training; and a steady escalation of U.S. weapons sales to Taiwan.

The U.S. military and its weapons contractors have told Taiwan what to order, including drones, Stinger anti-aircraft missiles and Javelin anti-tank missiles, the M142 High Mobility Artillery Rocket System and naval sea mines.

The Pentagon has provided similar weapons to Ukraine.

A $108-million U.S. arms sale May 25 was the fifth under the Biden administration and the fourth approved this year. It follows a $95-million air defense system in April and a $100-million upgrade for Patriot missiles in February. A $14.2-billion backlog of military equipment ordered since 2019 has not yet been delivered.

The goal is to make Taiwan a “porcupine” bristling with weapons. The island is being aggressively transformed into an offensive launch platform for war, even as U.S strategists seek to provoke China into military action.

Washington for years employed a similar strategy to build up military and fascist forces within Ukraine as a platform against Russia, with the aim of provoking the current disastrous war there.

These continuing weapons sales, along with Pelosi’s visit, are aimed at further undermining the One China policy.

Nikkei Asia reports that the U.S. has been in discussions to build a network of offensive missiles which would violate the INF treaty on Taiwan. On May 5 the State Department removed wording on its official website that had said “the United States does not support Taiwan independence” and that had acknowledged “the Chinese position that there is but one China and Taiwan is part of China.”

This year, for the first time, Australia, Japan, New Zealand and the Republic of Korea were invited to participate in a NATO Summit as “Indo-Pacific Partners.” This invitation was part of a new “NATO Strategic Concept” — a 10-year strategy plan that openly declares China a threat: “The close alliance between China and Russia threatens western values.”

U.S. wars in Asia have cost millions of lives, poisoned generations of children and left environmental destruction that is still unrepaired. Who can forget the devastation caused by U.S. wars in Korea, Vietnam, Afghanistan, Iraq and Syria? Millions of people were displaced. While each ended in failure for U.S. imperialism, they reaped trillions of dollars in profits for the military industries and the capitalist class.

The very real danger of a new war is rising. As a capitalist crisis deepens, U.S. imperialism will again choose war. Not because they win the wars, but the parasitic capitalist class desperately needs a huge infusion of military spending. Like an infusion of drugs, it’s a quick, temporary fix.

The U.S.-instigated war in Ukraine has not led to the predicted collapse of the Russian economy, but it has disrupted supply chains of energy and food globally. It is a major cause of the current recession.

A military confrontation with China would be far more disruptive. And it is even less likely to succeed.