On June 29, the Supreme Court of the United States (SCOTUS) continued its centuries-long assault on Native Americans in its decision in the case of Oklahoma v. Castro-Huerta. 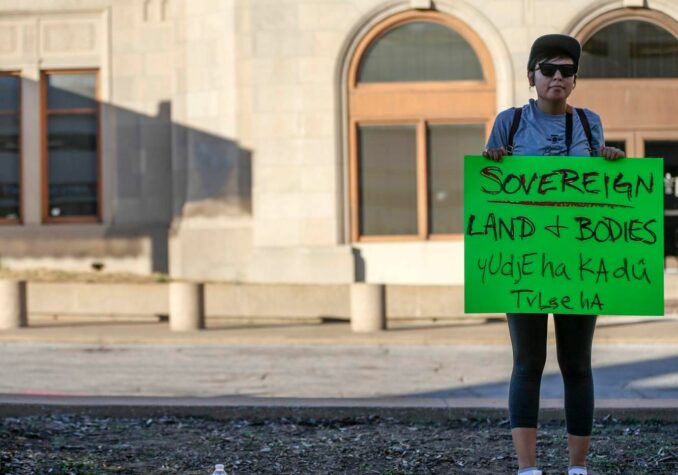 In a 5-4 decision, SCOTUS ruled that the state of Oklahoma has the authority to prosecute criminal cases on Native reservations. This decision was a direct attack on tribal sovereignty, which is the right of Native tribes to govern themselves without interference from the U.S. government.

This decision was a reversal of SCOTUS’s 2020 McGirt v. Oklahoma ruling, which barred Oklahoma from prosecuting criminal cases involving tribal citizens within the lands of various tribal nations. McGirt was viewed as a major victory for tribal nations, because it acknowledged their right to make and enforce their own laws as sovereign nations, free from the interference of settler-state governments.

Most importantly, McGirt resulted in almost 43% of Oklahoma being recognized as “Indian Country.” This meant that the Muscogee (Creek) Nation, the Cherokee Nation and other tribal nations, rather than the state of Oklahoma, had jurisdiction over their lands.

SCOTUS’s June 29 ruling on Oklahoma v. Castro-Huerta has put these gains into jeopardy and has served as a reminder of the United States’ unending cruelty and relentless efforts to strip Native Americans of their lands.

Writing the majority opinion for Oklahoma v. Castro-Huerta, Brett Kavanaugh insisted that “since Oklahoma’s statehood in the early 1900s, Indian Country has been part of the territory of Oklahoma,” a claim which directly contradicts Native nations’ rights to self-determination and sovereignty. This decision asserts that the land in Oklahoma belongs to a settler government, rather than to the tribal nations who have lived on those lands since time immemorial and to those tribes forcibly relocated there on the “Trail of Tears” in the 19th century.

So brazen was the SCOTUS’s disregard of tribal law that Justice Neil Gorsuch — a Trump nominee — broke ranks with his reactionary colleagues. In his dissent, Justice Gorsuch denounced the Court’s decision in Oklahoma v. Castro-Huerta, writing that “a more ahistorical and mistaken statement of Indian law would be hard to fathom.”

However, the United States weaponizing its justice system to attack tribal sovereignty is nothing new. The Court’s disastrous ruling on Oklahoma v. Castro-Huerta relies heavily on the “Doctrine Of Discovery,” which was used by Western Europe’s colonial powers — and, in more recent years, the U.S. government — to justify genocide and land theft.

Central to this doctrine is the idea of “terra nullius,” which translates to “land belonging to no one.”

Therefore, in the eyes of the colonizer, because there were no humans who had any claim to the land, the land belonged to no one and was therefore free for the taking.

“Terra nullius” is a core tenet of all settler-colonial projects, including the Zionist state of Israel, which has frequently used the mantra of “a land without people for a people without land” to excuse its dispossession of Indigenous Palestinians.

Moreover, he reasoned that the right to conquer and rule Native tribes had passed from European nations to the U.S. government. Marshall’s white-supremacist logic has become the basis for settler-colonial jurisprudence in the United States and is regularly referred to by judges and justices in rulings affecting tribal sovereignty.

Though written about the Russian Empire, Lenin’s words also apply to the U.S. settler-colonial state, whose continued existence depends on the denial of such freedom.

The Castro-Huerta decision underscores the need to support tribal nations — in their ongoing battle against the “American prison house” and in their struggle for self-determination and sovereignty.