This article from El Colectivo, July 7, edited by María Piedad Ossaba of lapluma.net and translated by John Catalinotto, refers to events at the June 28-30 NATO Summit in Spain.

The photo is outrageous, although at first glance it appears harmless: A group of women are posing, and in the background is “Guernica,” Pablo Picasso’s iconic anti-war painting. What is behind this seemingly innocent and banal photo? 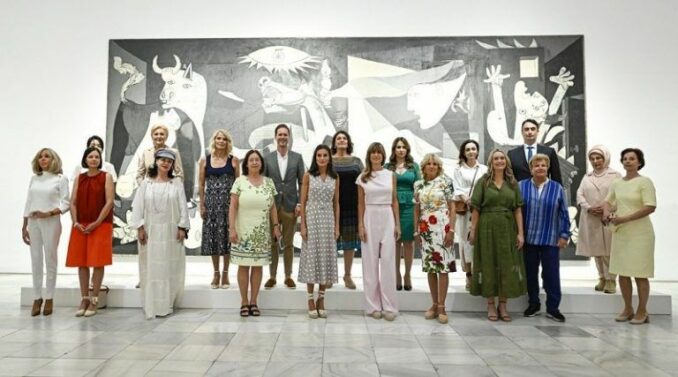 This group posing in front of Picasso’s ‘Guernica’ painting included Queen Letizia of Spain, Jill Biden of the U.S. and 14 other ‘First Ladies’ of ‘world leaders’ attending the 2022 NATO Summit in Madrid, June 29.

To understand, it is necessary to discuss who the women in the photo are and what was happening when it was taken. Because let’s remember there is no text — in this case it’s all visual, just a photo — without a context that might allow us to understand it.

In the photo are women linked to European or North American power. They are the “First Ladies,” who met in Madrid on the occasion of the NATO Summit in early July. They were summoned there by Spanish Queen Letizia Ortiz.

That is to say, they are women who accompany the presidents and prime ministers of the member countries of that military alliance that serves U.S. imperialism. The NATO meeting spoke precisely not about peace, but about war.

In this context, the photograph is an apology for war on the part of the women linked to NATO power. Considering the circumstances, the image of Guernica has been dragged through the muck.

Guernica is a universal icon that denounces the barbarities of war in general and the fascist aggression suffered by Spain in the 1930s in particular.

It is worth remembering that the painting in question was created by Picasso in mid-1937, following the bombing of the town of Guernica, which occurred on April 26 of that year. [The town was located in the Basque Country of Spain, and its Basque name is Gernikara.]

On that day, an indiscriminate air raid by German and Italian planes supporting [Spanish fascist leader] Francisco Franco killed some 300 people in the town and inaugurated the [modern] war of terror from the air — that is, the indiscriminate bombing of cities and their [civilian] inhabitants.

In Paris, two days after the attack, Picasso saw in French newspapers the destructive results of the bombing and began the work that later came to fruition at the request of the government of the Second Spanish Republic, which commissioned [Picasso] for a painting to be exhibited in the Spanish pavilion at the 1937 international exhibition in Paris.

Due to the result of the Spanish Civil War, that is, the triumph of Franco’s regime, “Guernica” was kept outside Spain until 1981, when it returned to that country and is now exhibited at the Reina Sofia Museum.

“Guernica” is an iconic painting of the 20th century and one of the most important anti-war symbols of all times, due to the moment in which it was created, its purpose of denouncing fascist crimes during the Spanish Civil War and for being an early pictorial announcement of what was to come with World War II and its trail of death and destruction by the Nazi hordes.

At the time of its creation, Picasso himself categorically stated: “In the mural ‘Guernica’ [. . .] I clearly express my hatred for the military caste that has shipwrecked Spain in an ocean of pain and death.”

Now it turns out that NATO, a criminal organization par excellence, is using “Guernica” as a symbol of its wars of aggression against the world, where the blood and pain generated by the fascist forces in the small town of Guernica on April 26, 1937, is multiplied.

For all these reasons, it had to be a painter, the Peruvian Daniela Ortiz, who left a testimony of her indignation for the vulgar warlike use of Guernica. With that motive she wrote a letter to the Reina Sofia Museum demanding the withdrawal of her works from that museum.

It is “aberrant,” Ortiz wrote, that “a piece created in response to a bombing should be used as a backdrop for those political figures who decide to impose war at a global level.”

She noted in her letter that “at this summit, held days after the massacre that took the lives of at least 37 migrants, the war conflict in Eastern Europe is even more tense with the entry of Sweden and Finland into NATO,” which “implies an intensification of the war and persecution of the Kurdish people,” to satisfy the appetites of Turkey. NATO “has taken a step further in the escalation of militarization, generation of wars and conflicts,” after singling out China “as a threat.”

She deplored that the Spanish government under President Pedro Sánchez has “succeeded in getting NATO to incorporate the so-called migratory flows as a hybrid threat. . . . This decision will further strengthen the militarization of the border and the deadly violence against the migrant population.”

She stressed that “the Reina Sofia Museum, funded largely with public money from the efforts of the migrant and Spanish working class, should not use the works of artists for the political purposes of organizations that impose war and violence, such as NATO, and that it should never use public resources to carry out these deplorable events.”

In this letter, something essential is emphasized, which is that the Museum should not only watch over the physical integrity of “Guernica,” but also its political integrity. And, we add, its moral integrity. Because it is unacceptable to use a work that denounces the crimes of the original fascism of the 1930s as a justification for the worldwide crimes of the imperialist armies of NATO in the 21st century.

Poor “Guernica” and poor Picasso in the hands of those who are preparing World War III and who are the direct political descendants of Hitler, Franco and Mussolini.