Tamir Rice would have been 20 years old June 25. But on November 22, 2014, the 12-year-old was murdered by racist Cleveland police. His mother, Samaria Rice, has spent the past eight years fighting for justice for Tamir and finding ways to keep his memory alive. 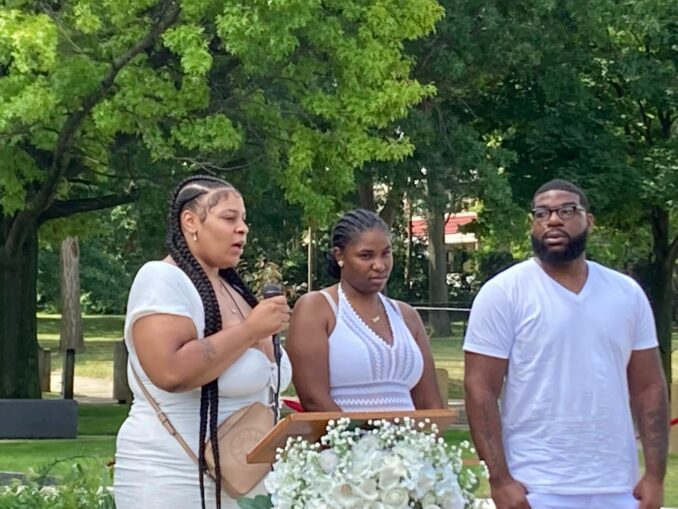 Hundreds of family and community members gathered July 16 at a ribbon-cutting ceremony for the Tamir Rice Memorial Butterfly Garden on the site Rice was killed. The garden honors Tamir as well his sister Tajai Rice, who was 14 when she was handcuffed and brutalized by the police at the scene of the murder.

A plaque reads: “This garden represents the injustice of the death of my son, Tamir Rice, and the treatment of my daughter, Tajai Rice — who was 14 at the time and witnessed the death of her brother at the hands of a Cleveland police officer on November 22, 2014. Tajai will forever be traumatized by having experienced the horrific events of that day. This plaque will be a constant reminder of the injustices in our country.

“This butterfly garden was created by Tamir’s community, who helped turn it into something beautiful for better memories going forward, for the park, the Rice family and the community. Thank you, Samaria, mother of Tamir and Tajai.”

Samaria Rice recognized the many mothers and other family members of people killed by police. Present were relatives of Angelo Miller, Craig Bickerstaff, Tanisha Anderson, Vincent Belmonte and others killed in Cleveland; Jun Wang, killed in the Cleveland suburb of North Royalton; and Jamarion Robinson, killed in suburban Atlanta.

July 17 marked the eighth anniversary of the 2014 police murder of Eric Garner in Staten Island, New York. The video of Garner’s death by chokehold — and the famous words “I can’t breathe,” uttered by George Floyd in his final minutes — went viral, spurring on the Black Lives Matter Movement.

Eight years later and two years after the Minneapolis police lynching of Floyd sparked a massive upsurge, the epidemic of racist police violence has not been stemmed.

Most recently the eyes of the country have been focused on Akron, Ohio, just south of Cleveland, where Jayland Walker was killed June 27 in a hail of police gunfire. In the autopsy report released July 15, the Summit County medical examiner stated that Walker had 46 bullet wounds.

Despite dozens of arrests of activists in Akron, protests continue to demand justice for Walker and the dropping of all charges against demonstrators. Those arrested have included Bianca Austin, aunt of Breonna Taylor, who was murdered by Louisville, Kentucky, police in 2020, and Jacob Blake Sr., father of Jacob Blake Jr., shot and paralyzed by Kenosha, Wisconsin, cops in 2020.

Hundreds turned out for Walker’s funeral July 13, and several large car protests have shut down traffic around Akron. Samaria Rice has participated in the protests.