Black Power Media broadcast an all-day “Happy Birthday, Mumia!” special. Love Not Phear and the Cops Off Campus Coalition held an all-campus teach-in and call to action from the Paul Robeson House in Philadelphia — historic home of that earlier internationally famed Black revolutionary from 1966 until 1976. 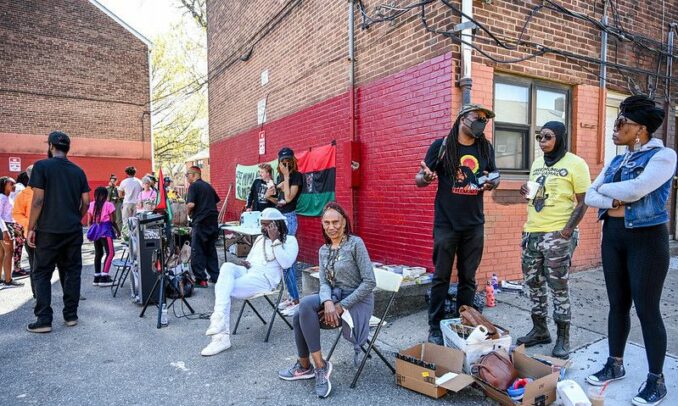 Mumia’s birthday was specially celebrated with a “Give Back to the Community” in this city where he grew up. 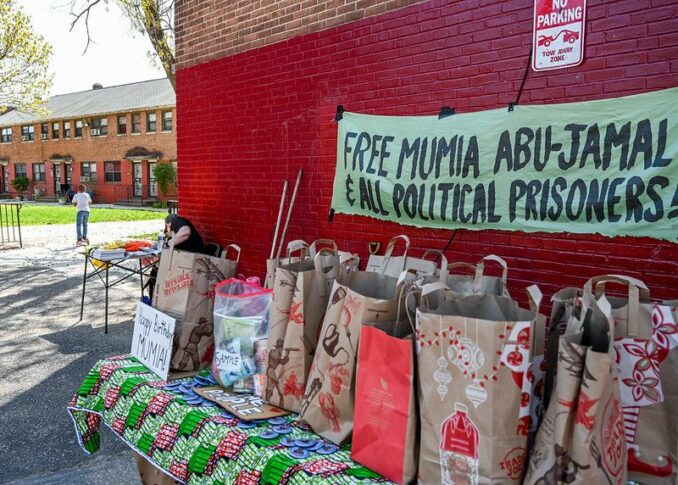 At the Richard Allen housing project in North Philadelphia, organizers with Love Not Phear Philadelphia and other Mumia supporters swept stones and debris from a small lot where they set up soccer nets, which were later donated to the community along with other sports equipment. There were tables loaded with dozens of bags of groceries distributed to community residents, plus free books for both children and adults.

In the weeks prior to the event, organizers had gone door-to-door to let residents know to expect them. The area is surrounded and threatened by gentrification.

There was face painting for neighborhood children. Videographers from Spirit of Mandela were on hand to interview participants and neighborhood residents. T-shirts were sold at discounted prices.

A highlight of the day was when two of Mumia’s friends and former classmates at Stoddart Fleisher Junior High School and Benjamin Franklin High School came out to share their fond memories of Mumia, why they believed he was innocent and how he was framed.

They pointed out the house where Mumia grew up. One brought out their junior high school yearbook from 1968, which included Mumia’s picture and two pieces he wrote, as Wesley Cook, at age 14. One called for the term “Black” to be used instead of “Negro” in a reflection on the need for Black involvement in the movement initiated by Dr. Martin Luther King Jr. The other was a poem on self reflection.

During the event the film crew from the Spirit of Mandela hung a large red, green and black banner on a wall visible from the street. It read: “We still charge genocide.” 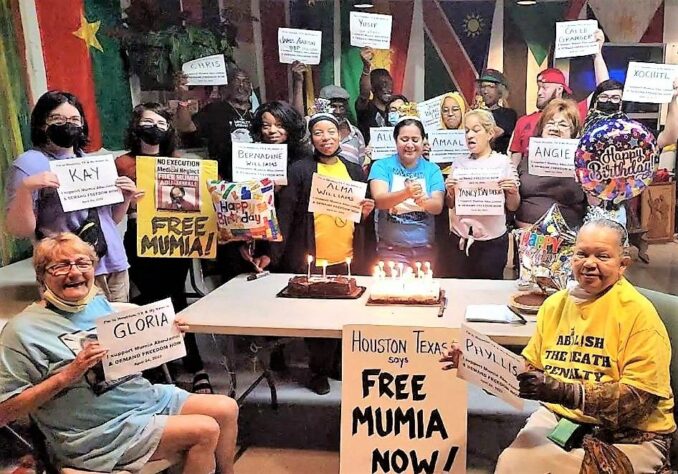 It was an afternoon of joy and concern. Joy that Mumia is still alive after years on death row and in prison. Concern that Mumia is living on “slow death row” with a myriad of serious health issues. 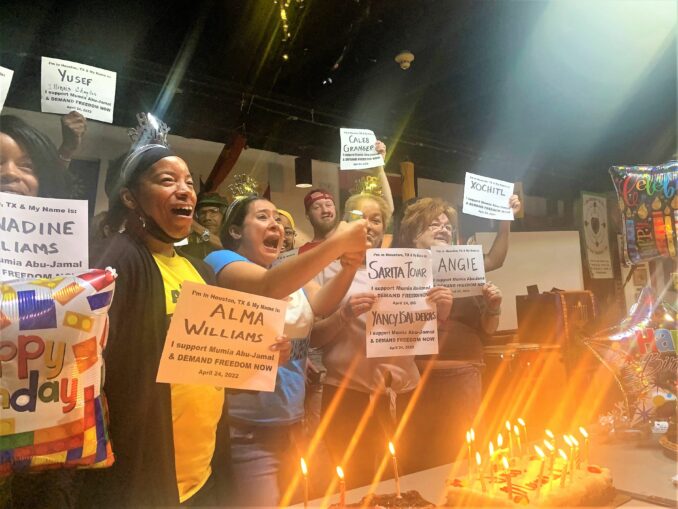 The gathering was sponsored by the Texas Death Penalty Abolition Movement; the Harris County Green Party; Workers World Party; Party for Socialism and Liberation; the Brown Berets of Houston, Tejas; Justice or Else Houston Organizing Committee; and the National Alumni Association of the Black Panther Party.

The following message of solidarity was posted on Twitter by Within Our Lifetime (@WOLPalestine): “On July 3rd, 1982, Mumia Abu-Jamal was unjustly sent to death row by a racist system. Today on his 68th birthday we join the global call to demand freedom for Mumia and all political prisoners, from Pennsylvania to Palestine! #40YearsInPrison” #FreeMumia #FreeThemAll

Activists in Philadelphia are organizing for a major demonstration in Center City July 3, to mark the 40th anniversary of Mumia’s unjust conviction and sentencing. They are calling on the movement to hold events that day in at least 40 cities.