Hundreds of protestors marched through midtown Manhattan streets April 20 in support of the Palestinian liberation struggle. They were rallying against Zionist attacks on the al-Aqsa Mosque, as well as cities and villages throughout occupied Palestine. 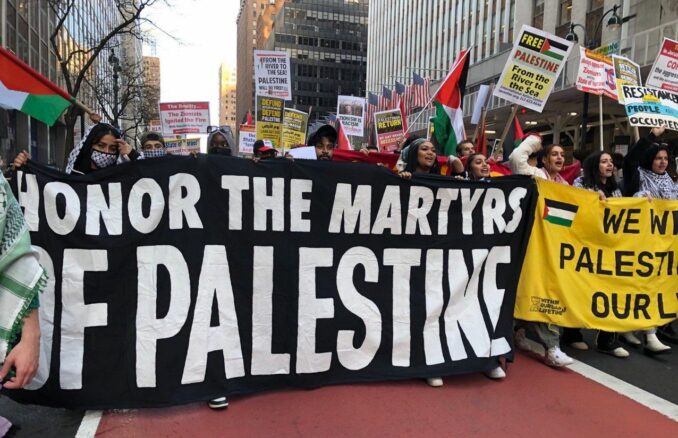 The demonstration began outside the Zionist Israeli consulate, as people gathered to hear activists from Within Our Lifetime-United For Palestine, Samidoun New York/New Jersey, Palestinian Youth Movement, Existence is Resistance and Decolonize This Place. The speakers and audience alike expressed full support for the Palestinian people’s struggle to liberate their land “from the river to the sea.”

Protesters then marched, waving Palestinian flags, shouting chants for liberation and return and carrying banners: “Globalize the Intifada,” “Honor the Martyrs of Palestine” and “We Will Free Palestine Within Our Lifetime.” The demonstration was met with applause, whistles and claps by passersby on the streets and at its endpoint at the public plazas at 59th Street and Fifth Avenue.

Those who marched affirm that we remain steadfast in our determination to liberate Palestine — including the 4,500 Palestinians incarcerated for their leadership in the liberation struggle.

We demand: End all U.S. aid to the racist state of Israel! Free all incarcerated workers struggling against the forces of Zionism!

We assert: Strength and victory to the resistance! Palestine will be free from the river to the sea!