Over 70 tulip, daffodil and iris harvest workers in Mount Vernon walked out of the fields on March 22 for three days, striking against terrible labor conditions. The strike was against the Washington Bulb Company, which is owned by Roozengaarde Flowers and Bulbs, the largest tulip bulb grower in the country with 2,000 acres of flowers locally. 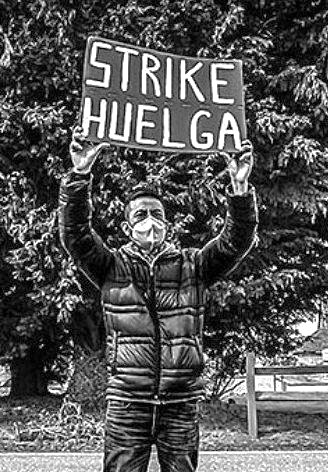 The strike broke out just a week before the month-long Skagit Valley Festival in Washington state. Droves of tourists and shoppers flock onto the flower farms, bringing revenue for the whole valley.

The workers mass picketed with their families outside the company on the main road. The workers strike came at a very strategic time to pressure the bosses.

Many of the workers are Indigenous from southern Mexico, and their first language is often Mixteco. They had many grievances working in the mud for demanding and intimidating bosses. Workers demanded an increase in pay, guaranteed eight-hour work days, improved sick leave and a better calculation of bonuses paid for the picking of flowers.

The farmworkers demanded access for hydrocortisone cream, to deal with the sap from cut daffodils which causes painful skin lesions. The workers won access to the cream and gloves and other protective equipment, along with better access to four portable toilets.

They also won an increase in pay and a guarantee against retaliation, according to Edgar Franks of Familias Unidas por la Justicia (Families United for Justice), an independent farmworker union.

Based in the Skagit Valley, Familias Unidas supported the tulip workers with the strike and negotiations. The independent farmworker organization originally established their union among berry field workers with a very progressive contract after years of struggle, including a boycott of Sakuma Bros. Berry Farm, in Burlington.

They are now joining thousands of Amazon and Starbucks workers as well as other sectors of workers across the country to win the fruits of their labor.