In the face of an intransigent management, who have refused to settle on a contract with workers for almost two years, over 200 Philadelphia Museum of Art staff workers and their supporters rallied and marched on April 1. The museum workers won a historic victory Aug. 6, 2020, with 89% voting to unionize as the Philadelphia Museum of Art Union (PMA Union), in affiliation with the American Federation of State, County and Municipal Employees District Council 47.

PMA workers in job action outside the Art Museum April 1.

Outstanding issues involve wages, benefits and workplace initiatives, such as implementation of worker protections of job security and safety from harassment, for transfer and promotion opportunities, and for more affordable health insurance.

The energetic rally took place the same day Amazon workers in Staten Island, New York, won their historic union-recognition vote. Several speakers mentioned this union victory, which was reflected on several signs. As with workers at Starbucks and Amazon, solidarity from other workers can be critical at times when powerful capitalist institutions refuse to give workers what they need and demand.

PMA worker Lav said, “I work front-of-house as a member of the Visitor Services Assistants team. I’ve worked at the museum for less than a year; but because turnover is so high, I’m already the second most senior person on that team. Many [workers] have left because of how management has responded to COVID-19. People are also leaving because there are so few career opportunities for Visitor Service Assistants here.”

Adam Rizzo, PMA Union President told the crowd: “It is shameful that a museum with a $60 million [annual] budget has staff working multiple jobs to get by. The PMA prioritizes spending $233 million on new spaces, while employees who work in those spaces haven’t received a raise in years.”

Muralist and street artist Symone Salib said, “Some of my first experiences with art came at the PMA. Workers make lasting memories, like the ones that I have, possible. But they are overworked and underpaid.”

Cathy Scott, President of AFSCME District Council 47, stated: “No employer should get away with stonewalling a fair union contract. It’s union busting, pure and simple. PMA has a responsibility to the community as a civic institution.”

Pennsylvania State Senator Niki Saval said, “The Art Museum is wealthy, powerful and resourced. But it does not exist without its workers. Your labor opens up the world. It is cruel that you are being undervalued. Enough is enough.” 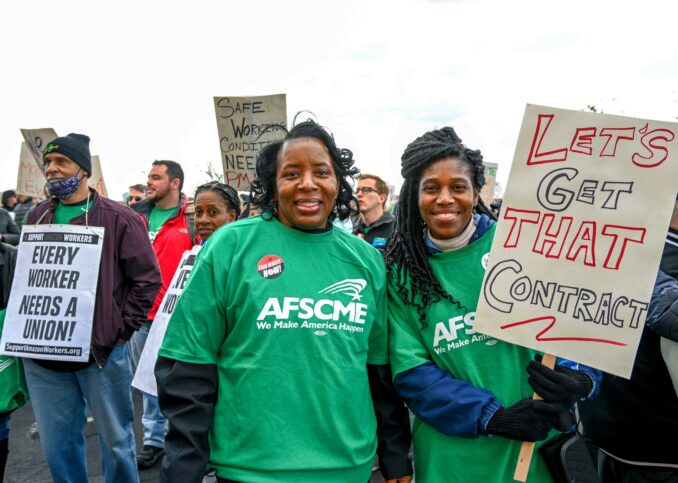 With their union recognition victory, the PMA became the first major U.S. museum to be organized in a “wall-to-wall” union, where all staff legally eligible for collective bargaining are represented by a single union. It made them among the largest museum staff unions in the U.S. and part of a rising tide of unionization across U.S. cultural institutions and industries.

PMA Union members are asking supporters to express solidarity by sending a letter to members of the Art Museum Board of Trustees. Tell them PMA workers need a fair contract NOW! (t.co/uTWRWSm46W)