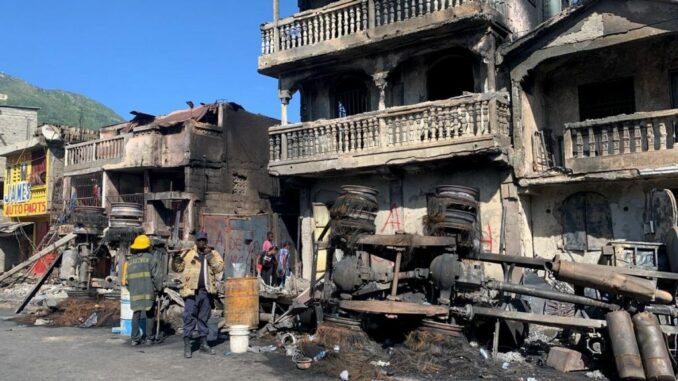 Washington extended Temporary Protective Status for Haitians for another 18 months, because conditions in Haiti are so miserable. Despite this the U.S. government is still actively deporting Haitians back to Haiti, flying them into either the airport at Cap-Haïtien or Port-au-Prince.

According to a tweet from an anti-deportation activist @thcartwright, there have been 137 flights to Haiti involving around 13,700 people from Laredo, Texas.

Why is Haiti so poor?

As a major medium of the U.S. capitalist class, the New York Times analysis proclaimed Dec. 19 that it is vital to understand “why it [Haiti] remains the poorest country in the Western Hemisphere, even after an infusion of more than $5 billion in U.S. aid in the past decade alone.”

The Times article fails to point out that following Haiti’s liberation from France and slavery in 1804, France forced Haiti to pay with cash what it had won with blood. The Haitians were forced to keep paying until the 20th century. The article does mention that “Citibank — then the National City Bank of New York — confiscated much of Haiti’s gold reserves” with “the help of U.S. Marines,” who invaded in 1915.

The money supposedly going to Haiti is redirected to USAID’s Food for Peace program, which provides direct cash subsidies to Haitian consumers. This allows the many food-insecure to afford to pay for imported food. As a result, Haitian peasant farmers can’t compete with this heavily subsidized rice and must stop producing rice.

Another major feature of U.S. aid is for shelter, especially after earthquakes and hurricanes. The supplies to build these needed shelters come from the U.S. or the world capitalist market. As a result, the capital involved again gets recycled out of Haiti.

A lot of the $5 billion, which the U.S. reports as aid to Haiti, was aid to U.S. industries. Haiti is poor because it has been so intensely exploited not because it lacks resources.

On Dec. 16 a plane flew the remaining 12 kidnapped missionaries from the Christian Aid Ministries out of Haiti — five had been previously released.

A day later the U.S. government hosted a virtual meeting of 14 international aid organizations and foreign governments, who had contributed resources to policing and security in Haiti. Haiti was represented at this meeting by the Haitian Chancellor Jean Victor Généus and the Ambassador of Haiti in Washington, Edmond Bocchit.

None of the kidnapped missionaries were named, and whether or not money was paid for their release wasn’t confirmed. Since there was a large team of FBI, CIA and State Department agents working with the Haitian National Police (PNH) on resolving this issue, the U.S. government had to have known the date of this release.

According to the Dec. 17 Miami Herald, the U.S. has engaged in a vigorous diplomatic effort to get Canada and France, two imperialist countries with major stakes in the Caribbean, to agree with its plan to upgrade the quality of the PNH and give it the kind of heavy weapons it would need to confront armed groups like 400 Mawozo, the group that kidnapped the 17 missionaries. The PNH has reported that there have been over 800 kidnappings this year, often of groups.

When Vice President Kamala Harris met with French President Emmanuel Macron in Paris in November, she raised the issue of an international coalition to support the police in Haiti. Assistant Secretary of State for Western Hemisphere Affairs Brian Nichols chaired the virtual meeting. He summed it up as: “The reality is whatever investments we provide for the Haitian national police need to be accompanied by gains in governance, transparency and anti-corruption efforts.”

In all this discussion of security improvements, the underlying problem of how to conduct the elections needed to give the Haitian government democratic legitimacy wasn’t raised.

The current government of Haiti has not been elected, because the previous government of Jovenel Moïse, finding it easier to govern by decree, postponed holding elections. The U.S. pretended to object, but as long as Moïse was satisfied and the political situation was reasonably calm, it didn’t take steps to force an election on Haiti.

Elections are not the only issue where the Haitian government has dropped the ball. It is responsible for providing the gasoline/diesel that keeps Haiti’s economy running, because its dilapidated electric grid doesn’t provide reliable service. So banks, hospitals, schools, the tap-taps that provide transportation and public services of all sorts depend on generators, which depend on gasoline/diesel.

The government put in a sharp increase in the price of gas Dec. 10. When a tanker truck overturned on the approach to a bridge in Cap-Haïtien on the night of Dec. 13, it started spilling fuel. People in the neighborhood rushed out with buckets to gather the liquid, which is precious to them.

A sudden explosion killed the people gathering the liquid, and it set some 30 houses in the neighborhood on fire so rapidly many sleepers were unable to flee. Cap-Haïtien’s hospitals quickly filled with the injured. As of Dec. 20, at least 70 people had died.

Acting interim Prime Minister Ariel Henry was quick to express his condolences, declare three days of national mourning and said the government would pay for the funerals.

A Haitian political commentator put the popular reaction this way: “This government reaction is just an excuse to hide its responsibility for not having put in place adequate means to guarantee the well-being of the people, leaving them adrift and at the mercy of circumstances.” (Haiti Liberté, Dec. 15)