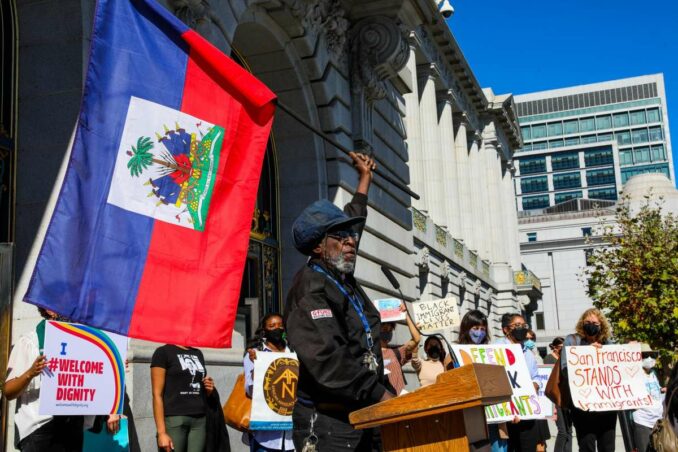 The following remarks were made by Ustadi Kadiri, a member of the Haiti Action Committee, Dec. 10, at a rally at the San Francisco Federal Building.

Dec. 10, 2021 is International Human Rights Day around the world. But somehow the United States did not get the memo. Why would I say that? Because the U.S. is the number one arms dealer in the world. That means you’re killing people and not feeding people. This country was built on exploitation. So for them to discuss or hold any country accountable for human rights is a joke!

It is not possible to be in favor of equal rights for some people and not in favor of all people. It’s just not possible. The U.S. has 1,000 military bases around the world. I ask you, is that the way you spread love and unity? Between Sept. 19 and Sept. 27, 2021 — in just nine days — the United States deported over 4,000 Haitians, including hundreds of families with children, without allowing them to seek asylum. Forget about the hurricanes and earthquakes. Biden used Title 42 as an excuse to deport people — the same one that Trump did.

So, no matter where you come from, if you’re a person of color, you’re not welcome in the “Land of the Free and the Home of the Brave”! Let’s go back to the founding fathers “landing on Plymouth Rock,” and imagine the Native Americans asking those crooks from England, “May I see your visa, your passport?”

Suppose they had welcomed the Pilgrims like they did the Haitians in Del Rio, Texas. But they didn’t — because they recognized them as being human, and treated them the same as they would want to be treated. We who believe in freedom also believe in equal rights and justice. Being human should show: Kindness, empathy, generosity, knowing right from wrong, honesty, gratitude and joy.