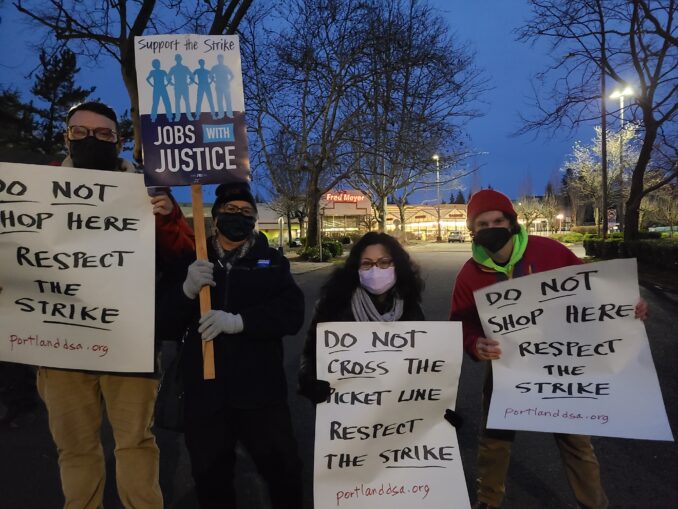 Massive community support was shown on Dec. 17 for thousands of grocery workers who walked off the job at 30 Fred Meyer and QFC stores across four Oregon cities. After only one day of the walk out, United Food and Commercial Workers Local 555 settled with Kroger, the parent company, for increased wages, added workplace protections, secure retirement and quality health care. Members will consider ratifying the settlement over the next week.

Hundreds of community workers, members of groups and other unions joined the grocery workers on the picket lines. Picketers turned away scabs, delivery trucks and so many shoppers that the parking lot was almost empty. People in passing cars were honking and waving their support.

Jobs with Justice member Jamie Partridge said, “I think that management underestimated the community support. Social media blew up — don’t cross the picket line, and they were in a hard place because it’s peak season.” He said stores were scrambling for workers. They expected more people to cross the picket lines. (tinyurl.com/3zbzpnph)

Fred Meyer and QFC stopped paying hazard pay a year and a half ago. Since then, workers continued to work as essential workers, without pay raises or respect. Meanwhile the company has been making record profits.

In violation of their contract, Kroger refused wage increases that workers deserve and has been withholding information about workers’ wages. They are currently offering a two-tier system which divides workers, offering raises for long-term employees but not for the vast majority of newer employees.

UFCW Local 555 called a walkout in stores with expired contracts, after months of negotiations. The union represents workers across the region with different contractual expiration dates. Union spokesperson Miles Eshaia indicated that a contract won in some locations will often help other stores win a decent contract.