The author’s article appeared in revistacrisis.com Oct. 28. Villareal is a filmmaker and professor at the University of Quito. Translator Mike Otto from Workers World has added an introduction and interspersed comments in brackets that make the article more accessible to the North American reader.

Introduction: Today after less than six months in office, banker-President Guillermo Lasso must confront an uprising that began Oct. 26. The trigger that sparked resistance was the withdrawal of fuel subsidies, leading to rising costs of transport, inputs and supplies needed by the small farmers who provide most of the food consumed by the people of Ecuador.

The economy in recession is strangled by IMF-dictated austerity on top of huge public-sector layoffs that turned the COVID pandemic into a disaster. More than 100,000 workers have emigrated in search of overseas employment. Polls register strong feelings of insecurity, fear, sadness and anger in the adult population.

Unemployment, growing poverty, crime on the streets and prisons out of control, with hundreds dead in rebellions continuing since February, all contribute to a sharp fall in support for the current government. Lasso’s regime has failed to keep the promises his campaign made regarding employment.

The Pandora Papers scandal named Lasso as a participant in moving money to tax havens. This exposed Lasso as someone who serves only the rich, never governing in the interest of the people. Villareal’s article follows.

Quito in the first day of resistance to neoliberalism

Oct. 28 — On Oct. 26, a progressive mobilization of the population to resist the government’s neoliberal program began nationwide in Ecuador. The protest that spread throughout the country has generated much hope that the people will gradually consolidate enough power to build an effective anti-neoliberal front, able to respond to the attacks of the [banker] Guillermo Lasso’s regime.

[Neoliberalism commonly refers to free-market theories and policies that eliminate price controls, deregulate capital markets, lower trade barriers and reduce state regulation of the economy. Neoliberalism promotes privatization and austerity. In brief, it means using the government to increase the exploitation of the workers and farmers to benefit the few rich and the imperialist monopolies.]

Step-by-step and in a convincing manner, many sectors and social movements have been joining the call issued by the Plurinational Parliament of the Peoples. [The PPP is a coalition of more than 180 social organizations and labor unions that formed in response to the invitation of the Confederation of Ecuadorian Indigenous Nationalities (CONAIE) in the aftermath of the uprising of October 2019.]

In Quito, between 5,000 and 7,000 people from different organizations gathered at the Institute of Social Security, raising the peoples’ demands: Freeze fuel prices at $1.50 and $2.10 per gallon [depending on the type of fuel]; revise last year’s bank loans for the agricultural sector; stop the privatizations; help small farmers deal with the relatively low prices for their produce [mitigate the high costs of agricultural inputs]; prior consultation with affected communities in areas of mining and oil exploitation; an end to conditions of precarious labor [overturn laws promoting labor “flexibilization”]; and specific public policies for women and the LGBT+ population.

On Oct. 27, mobilizations continued in the territories [the Amazon, the Andes and the coast] with multiple road closures in key provinces and mobilizations in major cities including Ambato, Cuenca, Loja, Otavalo, Manta and Guaranda, etc.

These first days constitute a starting point of the organized rejection of a self-perpetuating system under an Ecuadorian bourgeoisie, which for decades has imposed upon the people its demands for expansion, its guarantee of privileges and its class interests.

In the current historical moment, when neoliberalism is in full force, when imperialism reigns over the foreign debt and the militarization of the public space, the formation of a social fabric, with the ideological capacity to confront the assault against the people materialized in the shock doctrine, becomes urgent and fundamental.

The people need to be conscious and organized to be able to confront a state apparatus that unleashes all the violence of capitalism upon the masses. Neither neoliberalism nor the bourgeois state will be able to defeat a class-conscious people. 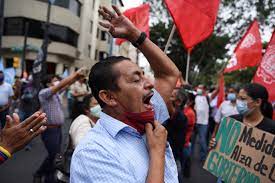 Translator’s afterword: The social explosion that occurred in October 2019 was sparked by a two-day nationwide strike of transporters and drivers after then-President Lenín Moreno announced an end to fuel subsidies. Because the cost of fuel is critical to the small farmers and especially the Indigenous peoples, they shut the country down for 11 days with road blocks.

The movement occupied government buildings in many towns, and the spontaneous invasion of tens of thousands of people from rural Indigenous communities turned the center of Quito into something resembling the 1871 Paris Commune. Residents of the capital city greeted and supported the demonstrators with open arms for a whole week until the uprising ended Oct. 13, 2019.

The central issue of the cost of fuel links the two October uprisings of then and now.

The current regime of Guillermo Lasso inherited the reins of a neoliberal state that was driven into the arms of the International Monetary Fund by then-President Lenín Moreno, who many consider the worst president in Ecuador’s history.

Lasso supported Moreno’s brutal repression of the 2019 October Uprising, which was part of a wave of popular resistance in Haiti and Latin America. Ecuadorian neoliberalism has its roots in the brutal exploitation of rural workers in the cacao and banana fields going back 100 years and more.

Mike Otto’s article following the election of Lasso, “Ecuador election: Analysts debate why neoliberal banker won” was published in Workers World on May 4, 2021.