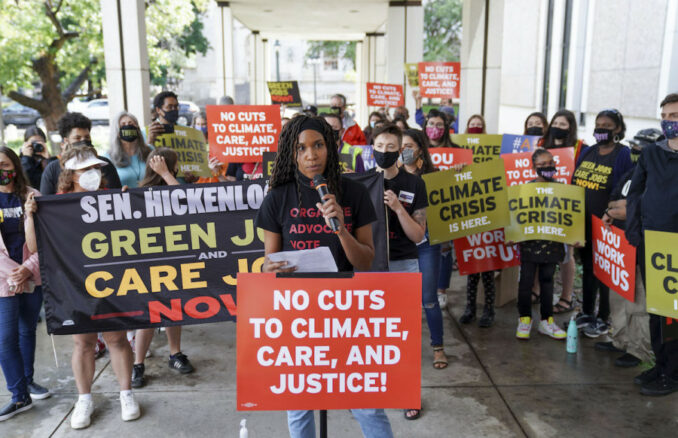 The Joe Biden administration, having promised an elephant, is delivering a mouse.

So far Biden’s “Build Back Better” bill is just talk, and what it promises dwindles day-by-day. Disappearing fastest are those programs that might have helped the working-class and poorer sectors of the population.

To understand this evolution, first look at how U.S. capitalism usually functions. First of all, the capitalist state apparatus — army, police, courts, prisons, corporate media — protects the property and interests of the 0.01% superrich, no matter who runs the White House or Congress. In addition, the multibillionaires control the government through the two major capitalist parties, Republicans and Democrats.

Does this mean the two parties are identical? No.

The now-Trumpite Republican Party, besides being the party of, by and for the superrich, has become the leading party of white supremacy, xenophobia and misogyny. It mobilizes all forms of bigotry. This makes the Trump Republicans especially dangerous to working-class solidarity.

The Democratic Party has a multinational membership and more support from oppressed members of the working class. Just like the Republicans, however, it promotes imperialist interests worldwide, waging war to impose them. It defends and imposes the rule of capital within the United States.

The Democratic Party sometimes proposes policies that reduce inequalities and injustices. It fears a social explosion.

The Democratic leadership, however, rarely fights for these positions when it confronts determined ruling-class obstruction. It wins social programs only when mass struggle accompanies the legislative program.

The main examples were Franklin Roosevelt’s New Deal in the 1930s — accompanied by the unionization of the U.S. industrial working class. Lyndon Johnson’s Great Society increased these concessions — under the pressure of the Black Liberation Movement in the late 1960s.

The banking and real-estate crisis of 2008-09, rampant income inequality, the ongoing Climate Crisis and the COVID pandemic have exposed the fragility and instability of the capitalist system in the U.S., that system’s most powerful center.

The original Build Back Better bill was supposed to take on these mammoth problems by rebuilding the infrastructure, providing jobs along with social benefits and increasing taxes on the superrich — a little.

Building the “hard infrastructure” — highways, bridges, railroads, water mains, etc. — aids the capitalist system. Even Republicans appeared to support this part of the program, but without increasing taxes on the rich.

The social benefits, called the “soft infrastructure” — education, child care, health care, environment — also aid capitalism by muffling class conflict and developing the workforce. But the big capitalists and their political representatives hate making any concessions to the working class, especially to its poorest and most oppressed members.

From what was originally proposed, Biden has already given up points: Gone are free community college tuition, expanded Medicare, paid family and sick leave, new funding for housing and pre-K and childcare, subsidies for health care and expanded Medicaid and taxing the rich. All these are popular programs that would help all working-class people and which redress the inequalities that women and Black, Latinx, Indigenous, LGBTQ2S+, gender oppressed and disabled people disproportionately face.

The Republicans are united in obstructing programs that benefit 90% of the population. These programs would be widely popular . . . if the Democratic leaders mobilized for them.

Joining the Republicans are two Democratic senators, Joe Manchin and Kyrsten Sinema, who are unashamedly backing big business. These two serve as a pretext for Biden and the Democratic leadership to concede, without a fight, every point that made their program popular with the working class.

The Democrats do this even though it risks losing the program and losing the election to the Trumpites.

While any mass mobilization fighting for the more progressive “soft infrastructure” is a worthwhile struggle, we draw the following conclusions:

The working class must mobilize and fight independently for its interests without depending in any way on Democratic Party leadership.

Any progressive program must serve the interests of the most oppressed as it aids the entire working class, uniting the whole class in struggle.

Recent examples of such effective, necessary mobilizations are the 2020 Black Lives Matter movement and the strike movement now picking up steam, along with workers organizing their workplaces and expanding unionization of all sectors of the class.