Kellogg’s workers continue their strike at plants in Battle Creek, Mich.; Lancaster, Pa.; Omaha, Neb.; and Memphis, Tenn. They are members of the Bakery, Confectionery, Tobacco Workers and Grain Millers Union, and their demands center around the unfair two-tier wage system and cuts to benefits.

The majority of workers at the Battle Creek plant are registered Republicans. Union leaders have brought to light how local Republican lawmakers take major contributions from the Kellogg’s corporation and benefit financially in other business dealings with them. These same lawmakers have been silent on the issues facing their striking constituents. This is indicative of the state’s allegiance in the struggle between the capitalists and the working class. The power and money of the ruling class is what drives politicians, not what is best for the masses.

Heaven Hill Distillery workers in Kentucky, members of United Food and Commercial Workers Local 23D, have ended their strike after winning major concessions in a five-year contract. The strike began in early September. Among the gains, the new contract will maintain overtime language, increase company contributions to employees’ health care plan and increase wages by as much as $3.09 per hour.

Faculty at the University of Pittsburgh will unionize with the United Steelworkers after a landslide election win. This will include 3,000 full-time, tenured, and part-time educators. Organizers said the pandemic and the need to have more involvement in decision-making at the five Pitt campuses really pushed the victory this time; there were two failed attempts in 1991 and 1996.

The staff at Pitt have launched a unionization drive, also with USW. They include thousands of university workers — academic advisers, lab managers, research coordinators and others. Graduate students failed to win a union by a narrow margin in 2019, but the Pennsylvania Labor Relations Board cited the university for Unfair Labor Practices. It was revealed that the university has paid $2 million to an anti-union law firm since 2019.

The Harvard Graduate Student Union, HGSU-UAW, a union of more than 4,000 students who work on campus, held a three-day strike Oct. 27-29 because Harvard has refused to bargain in good faith. HGSU is made up of teaching assistants, tutors and research assistants.

Key issues are adequate pay for grad students, many of whom have families and cannot live on the wages they are paid, and dental insurance. But the big demand they have been pushing since the founding of their union four years ago has been opposition to racist discrimination, sexism and sexual harassment. Management refuses to give them the same contract language that the UNITE HERE Local 26 dining hall workers have. Discrimination based on race, sex, nationality, sexual orientation or gender identity will not be tolerated and can be grieved to arbitration, including sexual harassment.

Management has told the students that they should trust them on sexual harassment and racism. Not one student trusts management on these issues, and the students know that the university has been perpetuating and promoting racism and sexism for over 350 years since Harvard’s inception.

Strikers’ tactics included picketing classes, stopping trucks from making deliveries, disrupting the presidents’ speeches and leading classroom walkouts. Harvard management refused to negotiate Oct. 28, saying that they did not like the tactics of the union — so HGSU increased their tactics. 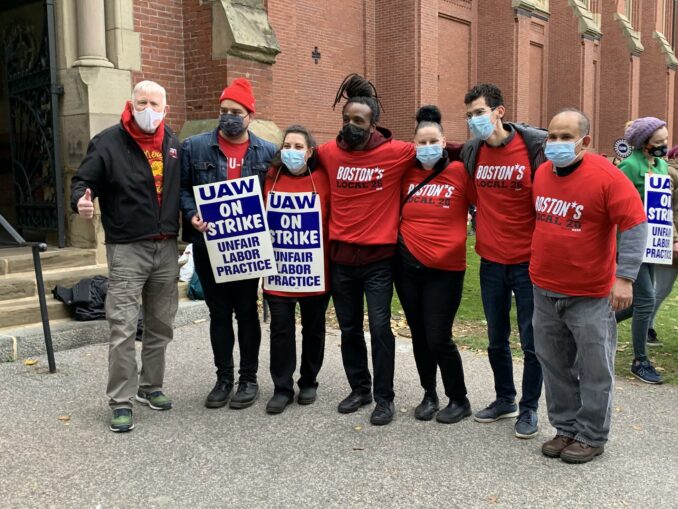 Four unions on campus — Harvard Union of Clerical and Technical Workers, AFSCME Local 3650; UNITE/HERE Local 26; SEIU 32BJ, representing custodians and guards; and HGSU — have joined together to support each other while they all start negotiating their contracts with Harvard management. All the unions came to the rallies of the HGSU, spoke of their support and supported each other’s job actions.

Supporters of the Harvard graduate students disrupted a speech by Harvard President Lawrence Bakow during a parent-student orientation. Demonstrators shouted: “I stand with student workers. . . . None of us want abusers on campus.” The 40 demonstrators exited the auditorium to applause from the remaining attendees.

Reno, Nev., Teamsters Local 533 bus drivers ended their strike after finally winning concessions over scheduling and time off from Keolis, a privately owned bus company based in France. The drivers have been fighting for months and were on strike for 25 days in October. The striking workers mobilized the community to support them. According to bus driver and shop steward Michael Lansborough,“Working-class people need to know: It’s time for us to unite. Not only unite individually into unions, but unite as a whole to beat down this corporate attitude that they can just walk all over everybody.” (Payday Report, Oct. 21)

Southeastern Pennsylvania Transit Authority (SEPTA) and Transit Workers Union Local 234 bus drivers reached a tentative agreement last week, after the union voted to strike on Nov. 1 if contract negotiations broke down. Union leadership stressed how the drivers were essential employees during the pandemic, risking their and their families’ health and welfare to keep SEPTA operating. In fact, 11 SEPTA workers died during the height of the pandemic from COVID.

TWU Local 234 represents 5,000 bus, trolley and subway drivers along with station cashiers and mechanics. Included in the agreement is a retroactive pandemic hazard pay plan and two weeks of paid parental leave for the birth or adoption of a child. A ratification vote is scheduled for Nov. 5. The historically militant Local 234 has struck SEPTA 13 times since 1975.

Phebe Eckfeldt contributed to this article.