April 30 — In the wake of the April 11 second round of the presidential election won by right-wing banker Guillermo Lasso, Ecuador has been torn by cleavages and violence from organized crime, whose roots are in the extreme poverty, rampant inequalities and elimination of the social welfare programs introduced by the 2007-17 government of Rafael Correa. 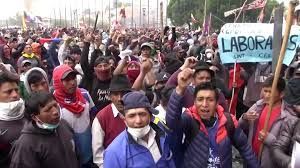 The COVID-19 pandemic is a continuing nightmare, with hundreds of people on wait lists for a hospital bed. Here in the northern Andean city of Ibarra, more and more people are begging in the streets.

Although progressive young economist Andrés Arauz of United for Hope (UNES) — the party associated with former president Rafael Correa — led in the first round of the election and was leading in polls, Lasso won the second round with a 5% margin or approximately 420,000 votes. There were many more null votes — 1.75 million — than usual.

But Arauz won hardly any of the 1.8 million votes that went in the first round to the third-place candidate, Yaku Pérez of the Pachakutik party (PK). Pachakutik is the political arm of the Confederation of Indigenous Nationalities of Ecuador (CONAIE). A regional analysis of the vote revealed Arauz won a large percentage of Afro-Ecuadorian votes.

Lasso’s electoral victory increases U.S. hegemony in Latin America and legitimizes Lasso’s four-year unofficial co-governance with the unpopular President Lenín Moreno. This leaves the Ecuadorian working class, the Indigenous movement, and the “authentic left” or “other” left (to the left of Arauz and Correa), weakened and divided. CONAIE, the PK and the “other left” advised a null vote April 11.

Lasso’s CREO party and the Social Christian Party suffered huge losses in the first round. They only control 30 seats (22%) in the National Assembly, compared to 49 (36%) for Arauz’ party. Only 2 out of 10 voters chose Lasso in the first round.

Lasso’s election increases the misery for the working class, whose precarious downward slide during the last three years is well documented. The index that measures precarity rose at an unprecedented rate of 15% in 2020, the year of the pandemic. This rise reflects layoffs of hundreds of thousands of public sector workers, the continuing loss of private-sector jobs and International Monetary Fund-imposed austerity.

The Moreno regime consciously failed to enforce existing labor protections during the pandemic, and his new legislation allowed bosses to easily discharge workers.

Official data shows pauperization dramatically increasing since the Correa government — which had lifted 1.14 million out of poverty in ten years. Moreno drove 1.87 million people back into poverty in less than four years. And 1.17 million people are now in extreme poverty.

Nonetheless, Moreno’s government survived the Great Uprising of October 2019. The worst president in Ecuador’s history, rejected by 90% of the population, repressed the rebellion and imposed even harsher austerity during the COVID-19 pandemic.

Beginning on May 24, with the inauguration of Guillermo Lasso as president of the Republic, the new government of Ecuador will be directly in the hands of the elite class of big businessmen, bankers and the corporate media, aligned with imperialism and the Latin American political right. Lasso will deepen the neoliberal business model.

Lasso’s right-wing CREO party and the Social Christian Party led the cabal that has now privatized the Central Bank following April’s election. Lasso aims to privatize Social Security next. Both steps violate the 2008 Constitution on the way to dismantling the social program of Correa’s Citizen’s Revolution.

Even the Public Defender of Ecuador condemned the Moreno regime’s repression of the plurinational October 2019 rebellion as a crime against humanity. The next year, during the terrible days of the pandemic, the class struggle evaporated. Moreno won and Lasso won.

The October 2019 uprising was never discussed in the general election by any of the 16 parties. Yaku Pérez, the Indigenous candidate for PK, even supported the regime’s indictments against the leaders of the rebellion. But it was that October 2019 uprising that catapulted the PK into the National Assembly as a force, with 27 deputies.

The dominant discourse promoted by the media painted Arauz as a puppet of Correa. And yet the Lasso-Moreno tight connection during Moreno’s rule was successfully hidden by a slick campaign supported by the corporate press, with millions of dollars spent on social media.

Years of media lies have convinced many voters that Moreno’s right-wing regime was a continuation of Correaism. The corporate mass media began viciously attacking Correaism for waste and corruption during the latter half of Correa’s second term with great success. This tactic effectively covered up the violent neoliberal attack on the people.

Indigenous communities in numerous provinces voted for Lasso. Many social organizations, including feminists and environmentalists, abstained or voted for Lasso in protest. No one has measured the depoliticizing effect of NGOs operating in the country. There isn’t a simple way to explain why hardworking, poor Ecuadorians chose the neoliberal class enemy over Andrés Arauz.

The burning issue of access to abortion was barely mentioned in the general election, with the exception of Xavier Hervas, whose Democratic Left (ID) party won 16% of the first-round votes, attributed to his slick TikTok appeal to youth.

The Constitutional Court waited until after the Lasso’s victory to declare the law prohibiting abortions in the case of rape unconstitutional.

Various Ecuadorian analysts are examining the lessons of the election from the viewpoints of the sectors of society they represent. We present some of them here.

Marxist thinker Alejandro Moreano in an interview with Línea de Fuego said, “Moreno . . . will turn out to be more intelligent than all of us, because he survived the fiercest criticism.” Dr. Moreano observed that the day after the election, Moreno rubbed Lasso’s victory in the faces of the masses by raising the price of gasoline, which was a bitter reminder of the issues that triggered the October 2019 social explosion.

Moreano called the election “an abominable thing. . . . Many Indigenous sectors voted for Lasso. How to explain that? After carrying out the gigantic strike that shocked all of Latin America? How do we explain that an Ecuadorian voted for neoliberalism after striking in October?”

Moreano said, “All the Ecuadorian people opposed neoliberalism. Then Moreno responded using anti-Correaism . . . It’s not about Correa. No, no, no, no. It is a triumph of the Latin American extreme right.”

In an April 16 Zoom forum, economist Gabriela Montalvo said, “There is a significant vote of women in favor of Lasso.” She faulted Correaism’s lack of appeal to women, saying “the urgent questions concerning feminism [must] be taken into account as a political priority. . . .

“It is not just violence or abortion. There is the economy. Economic programs always aim at correcting unemployment by promoting construction.” She urged special attention to finding the jobs women want: “We have to start looking at their demands.”

At the same April 16 forum, Franklin Ramírez identified three key aspects underlying the election outcome: (1) the neoliberal advance was catalyzed by violent “necro-politics,” the death-dealing politics of the pandemic that prevented any opposition from forming in the Indigenous movement; (2) the polarized Indigenous movement is torn apart by tendencies of the left, right and the center; and (3) the defeat of the Citizen Revolution by Lasso should have been anticipated.

Ramírez said, “We knew that a unified right wing was coming, supported by the official apparatus and by the big media. The popular camp is fragmented.”

Leonidas Iza,  president of the Movement of Indigenous and Campesinos of Cotopaxi, which supports his bid to be president of the powerful CONAIE, made the controversial claim that the “authentic left” didn’t lose.

On April 5, Iza had criticized Arauz for not distinguishing himself from Correa, “who separated our organizations from their leaders, deepened the mining in Indigenous territories, persecuted and criminalized our leaders, struck down the intercultural bilingual education and did not respect the [Constitutionally protected] right to free, prior and informed consultation.”

Iza tweeted: “Correaism lost but not the left. We continue to fight! It is time for unity of all popular sectors, we will make the streets and territories our field of resistance.”

Pedro de la Cruz, an Indigenous leader in Cotacachi, Imbabura Province, tweeted a reply to Iza: “Mashi Leonidas, you are wrong. The Correaism that you are talking about has more than 4,232,000 brave citizens, who are not cowards, in the face of so much defamation and persecution, and who will be confronting the fascist right wing.”

Paz y Miño notes that Alejandro Moreano severely criticizes the actions of Yaku Pérez, and the alliance of Pachakutik with the Lasso forces, and credits Moreano for recognizing that, in spite of everything, conditions have been created for a “great anti-neoliberal front,” which regroups the left, a matter which, however, Moreano sees as difficult.

Paz y Miño says that Moreano’s “approach is timely and true. Therefore, the political groupings that lead and guide the broad spectrum of the Ecuadorian left — the ones responsible for this task — will face the urgent challenge of achieving the unity and convergence that for decades has remained unconsolidated.”

In the first week of May, a new president of CONAIE will be chosen. CONAIE will debate its relationship with its political arm PK. If Iza is chosen president over Yaku Pérez during the CONAIE Congress, the Indigenous movement will have a leader with a class analysis.

Iza says he will seek to consolidate the unity of the 180 social movements that constitute the Parliament of the People, which was instituted by CONAIE after the October uprising. That Parliament excluded Correaistas at the time.

Now the divide between the two powerful forces that oppose Lasso is even greater, as reflected in the twitter exchange between Iza and Pedro de la Cruz. Both the CONAIE and Correaism are facing hard times. The future is uncertain.