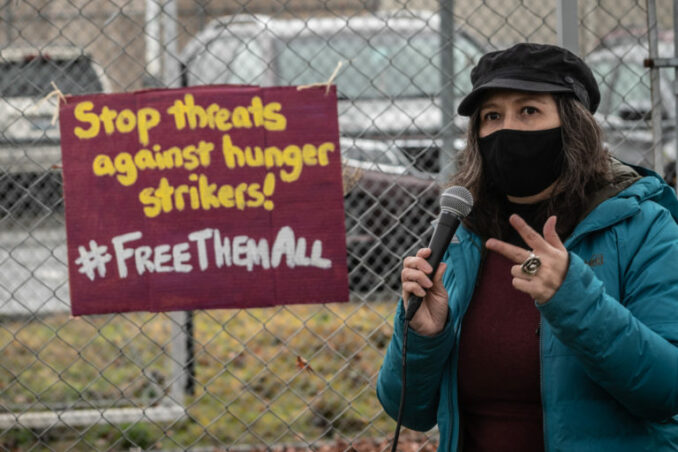 Incarcerated workers on strike against horrific conditions at the Northwest Detention Center were supported by La Resistencia, Dec. 15, 2020.

After years of hunger strikes, immigrant workers detained at the Northwest Detention Center in Tacoma, Wash., have won the right to be paid for their labor at the same minimum wage that is mandated for non-incarcerated workers. Washington State’s minimum wage is $13.69 an hour.

The private for-profit owner, GEO Group, has been paying the prisoner workers only a dollar a day. These workers do all the real work inside the place where they are incarcerated — the cooking, laundry, cleaning and other maintenance jobs.

On Oct. 27, a federal jury found GEO had been violating Washington state minimum wage laws for over 15 years. The company currently operates 57 prisons and detainee facilities inside the U.S.

The minimum wage boost comes from a lawsuit filed by Washington State Attorney General Bob Ferguson. In a separate lawsuit, on Oct. 29 a jury awarded $17.3 million in lost wages to all prisoners detained since 2014 in the Northwest Detention Center. GEO will likely appeal these decisions.

This prison labor victory comes as a result of years of hunger strikes by incarcerated workers, at least 20 of those at Northwest. The hunger strikes have often been combined with work stoppages, with the minimum wage being one of the top demands. Since the COVID pandemic began, adequate prevention, testing and treatment have been key demands.

The migrant detainees have been greatly aided on the outside by the solidarity group La Resistencia. The International Action Center has also brought solidarity.

La Resistencia NW held its Seventh Annual Día de los Muertos (Day of the Dead) on Oct. 31 at the Tacoma detention prison. The ceremony honored incarcerated Northwest workers who have died because of the inhumane immigration system: Mergensana Amar, Señor Jose, Jose Quinones and Cipriano Rios, a leader in struggle who died in Mexico in 2020 soon after being released.

The Washington state labor victory, which strikes a blow against imprisoned peoples’ conditions of bondage, should help incarcerated people everywhere in the U.S. Prisoners in New Mexico, Colorado and California have also filed suits — not yet successful — demanding the minimum wage in their detention centers.

The struggle continues against slave labor in prison, which is still legal under the 13th Amendment to the U.S. Constitution.