The right to access safe, legal abortions is under attack across the U.S., especially in the South and Midwest. It had been considered settled law since the Supreme Court of the United States legalized access to abortions in the landmark 1973 ruling in Roe v Wade. 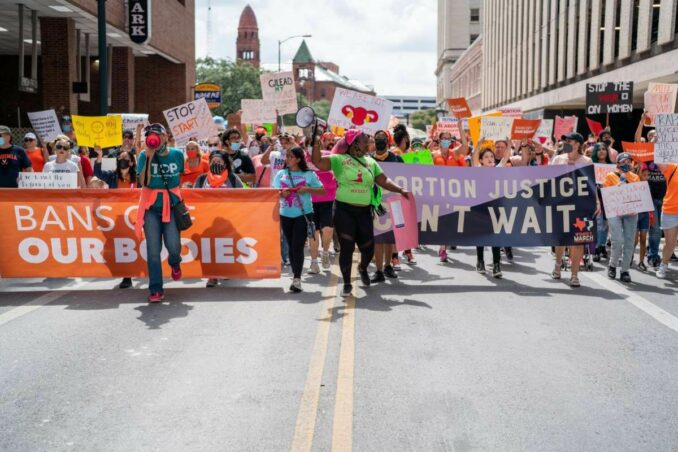 Bans Off Our Bodies Women’s March in San Antonio, Oct. 2.

In the Roe opinion, seven of nine justices, mostly Republican appointees, agreed that the right to privacy, incorporated into the Due Process clause of the 14th Amendment, includes a person’s right to make their own medical decisions, including about pregnancy. They acknowledged that forcing someone to continue a pregnancy can increase the risk to physical and mental health and financial stability. Although not stated by the justices, an unintended pregnancy can also interfere with personal relationships, family life, education and jobs.

Yet this fundamental right has been under attack from the political right ever since Roe was decided. The reactionaries pushing anti-abortion measures were emboldened during the Trump administration, which appointed three Supreme Court justices and 220 federal judges.  Many are hostile to reproductive rights.

Misogyny, racism, anti-worker and anti-poor attitudes shape their opinions. Their allies in state legislatures have pushed for restrictions and obstacles to abortion in every way, with help from conservative organizations and think tanks.

This means that for many people, particularly low-income individuals and members of Black, Latinx, Indigenous and im/migrant communities who have trouble obtaining decent medical care, abortions are often inaccessible, even though the right to have the procedure exists in the law. Making matters worse, the Hyde Amendment, signed by former President Jimmy Carter, a Democrat, bars the use of Medicaid funds for abortions.

The campaign to eliminate the right to abortion is aggressive, well-coordinated.and well-financed. Even though the Roe ruling is established precedent, usually considered sacrosanct, anti-abortion forces are hell-bent on overturning it and criminalizing abortions. Six SCOTUS justices have ties to the reactionary Federalist Society, including the three Trump appointees. Their aim is to nullify gains made by people’s movements, including abortion, voting, immigrant, labor and LGBTQ rights – to set the clock back decades.

In 2021, there have been more state legislative attacks on abortion rights than ever before, with nearly 600 measures proposed in 47 states by early June; 97 were implemented. Over 20 states have “trigger bans” to criminalize abortions if Roe is overturned.

In 31 states, the majority of legislators oppose abortion while opposing benefits for pregnant people and children. Their “right to life” slogan is a lie. Not one Republican Congress member voted for the Women’s Health Protection Act to protect reproductive rights.

The right wing is using access to a medical procedure as a political tool to whip up their base  and promote their agenda. They are whipping up racism and misogyny against low-income and women of color.

If Roe is overturned and abortion criminalized, the procedures will continue, only in unsafe environments without medical practitioners. Before Roe, the Guttmacher Institute estimates that one-sixth of all pregnancy-related deaths were caused by illegal abortions.

About 25 million women and girls — Black, Latinx, Indigenous, im/migrants, disabled, rural residents, victims of sexual assaults and domestic violence would lose abortion access if it is left to the states to decide whether to legalize abortions. It would also impact people of various gender identities who can become pregnant.

When Texas implemented a near-total ban on abortions Sept. 1, millions of residents lost a fundamental right overnight. Senate Bill 8 banned abortions after the sixth week of pregnancy, with no exceptions for rape and incest. The state set up a bounty system enabling vigilantes to sue any “helper” of an abortion seeker for $10,000.

When the Center for Reproductive Rights appealed to SCOTUS, the top court took a sledge hammer to its own ruling legalizing abortion in Roe, when five conservative justices issued a one-paragraph unsigned response refusing to halt the Texas law.

Under pressure, on Sept. 9 the Department of Justice filed a lawsuit against Texas  which said S.B. 8 was unconstitutional. At a hearing on Oct. 1. Federal District Judge Robert Pitman agreed with the DOJ and issued a 113-page opinion Oct. 6.

Judge Pitman blocked enforcement of the ban, writing: “From the moment S.B. 8 went into effect, women have been unlawfully prevented from exercising control over their lives in ways that are protected by the Constitution.” He rebuked SCOTUS justices for not stopping the law’s enforcement immediately, explaining in detail how pregnant people are suffering because of the horrific law.

Judge Pitman said the state contrived an unprecedented statutory scheme “with the intent to preclude review by federal courts that have the obligation to safeguard the very rights the statute likely violates.” He criticized the state for deputizing private citizens to enforce the law through civil action for financial rewards.

In a groundbreaking judicial move, Pitman’s decision said, “The Court recognizes that not all pregnant people identify as women.” Imagine the right-wingers’ reactions to that statement!

In the intervening 48 hours, many clinics were open and abortions were performed. Under S.B.8, doctors and clinic operators can be sued retroactively for their actions in that two-day period.

Amy Hagstrom-Miller, CEO of Whole Women’s Health, said those clinics were performing abortions then, aware of the risks. She said, “But not for a second do we question that it was the right thing to do. People need our help, and they shouldn’t be put through this.”

Meanwhile, hundreds of desperate pregnant people are being turned away from clinics daily. Some are driving hundreds of miles to overwhelmed clinics in neighboring states, while others are flying to Oregon and New Jersey. Not everyone can take off work, get childcare, as most abortion seekers are parents, acquire funds, transportation and housing. Some fear asking friends for help as they could be sued. Most minors, undocumented im/migrants and domestic violence victims can’t travel.

The Texas law was the first time since 1973 that a pre-viability abortion ban was allowed to stand. This signaled a rightward shift toward federal curtailment of the procedure. The state of Mississippi in Dobbs vs. Jackson Women’s Health Organization passed a 15-week abortion ban, but has asked SCOTUS to outlaw all abortions.  That case will be argued Dec. 1.

Through amicus briefs, thousands of people and hundreds of organizations have urged the top Court to strike down Mississippi’s abortion ban and protect this essential human right and medical procedure.

Hundreds of thousands of demonstrators showed their support for legal abortions in every state and Washington, D.C., Oct. 2. The overwhelming majority of people in the U.S. support the Roe decision. It’s time to keep the pressure on and keep on marching.

Kathy Durkin participated in the movement to legalize abortions.