Oakland, California — Youth from the Decarcerate Alameda County coalition rallied at the Board of Supervisors June 22 to demand that funding be pulled from the county sheriff’s budget and reallocated for mental health services. 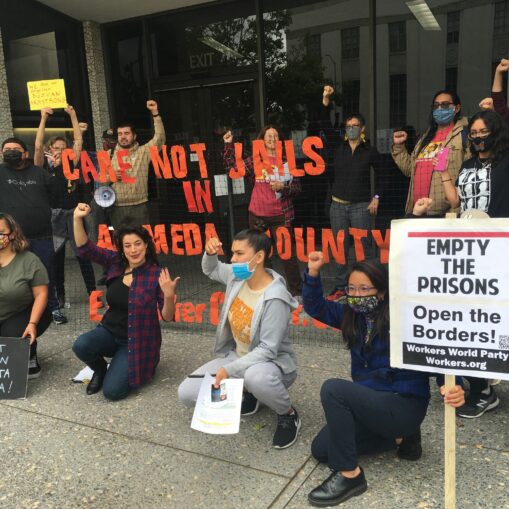 Speakers pointed out that 44% of the 4,000 people incarcerated at the Alameda County Santa Rita Jail were dealing with a mental illness, with “shockingly inadequate” money available to help them, while police and sheriffs “seem to have a blank check” when it comes to funding. A recent U.S. Department of Justice investigation found that Santa Rita fails to provide “adequate care to prisoners with serious mental health needs, including those at risk of suicide.” (April 22, 2021 DOJ letter to Sheriff Gregory Ahern.)

Santa Rita is one of the largest county jails in the U.S.

A 2021 report by American Civil Liberties Union and Urban Peace Movement showed that 71% of Alameda County misdemeanors were “low-level.” In addition, over 90% of those incarcerated in Santa Rita Jail have never even been sentenced — in other words “rotting in jail” waiting to be seen by a judge or court officer.

The racial disparity in the jail population is scandalous, with 48% of Santa Rita Jail population being African American. Asked about this, Evelyn Canal of Communities United for Restorative Youth Justice said, “They don’t need a reason in this country to jail Black and Brown folks.” Others spoke from the Anti Police-Terror Project, Hayward Community Coalition and poet Ericson Amaya from 67 Sueños.