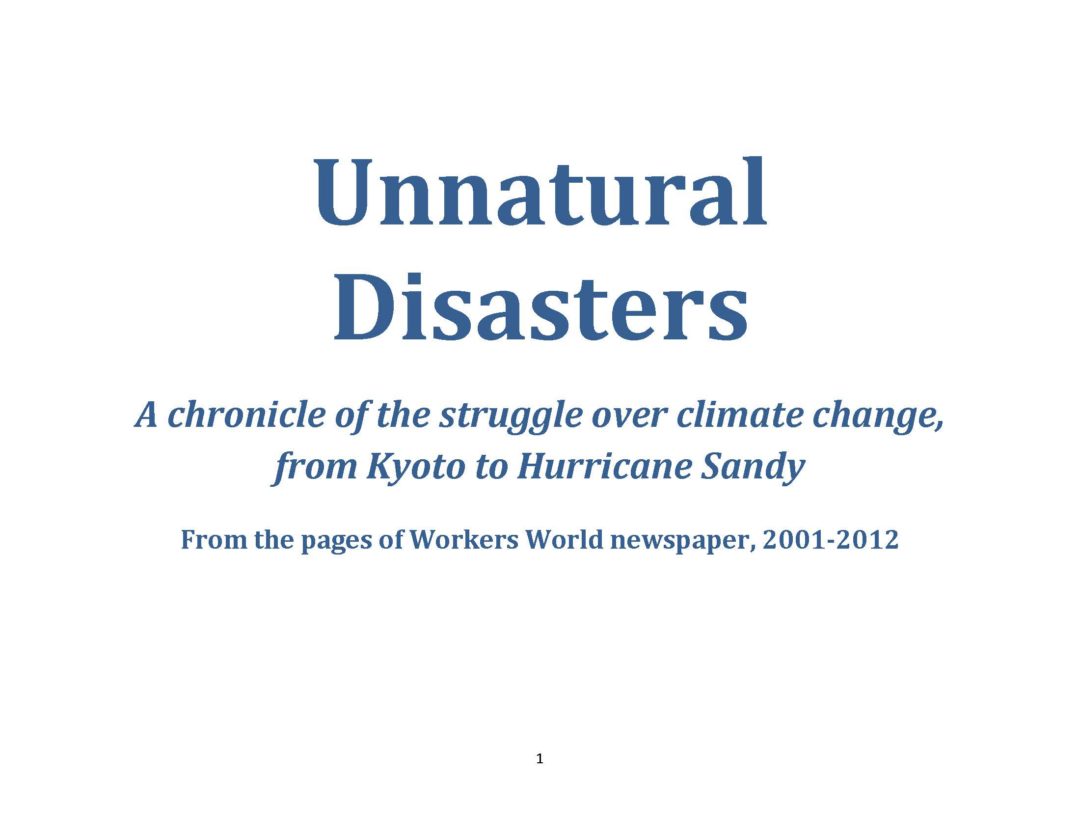 A chronicle of the struggle over climate change, from Kyoto to Hurricane Sandy
From the pages of Workers World newspaper, 2001-2012

The disaster known as Hurricane Sandy that hit the Caribbean, the United States and Canada at the end of October 2012 should have come as no surprise. Every possible warning sign had preceded it. For years, international conferences had been held at which scientists laid out the effects of global warming on the climate. What were once considered freakish weather events — torrential rains, severe droughts, more frequent and intense tornadoes and hurricanes — had become the new norm.

Yet, five days after the hurricane’s first blast, as this booklet is being compiled, millions are still without power. Besides those killed during Sandy’s initial blast and the huge surge of ocean water it drove onshore, more continue to die for lack of heat, access to medications, medical care and transportation, and other causes related to a nonfunctioning infrastructure.

How did we get to this perilous position?

The articles assembled here, which appeared in Workers World newspaper between 2001 and the present, tell the story. From the repudiation of the Kyoto Accords by President George W. Bush in
2001 to the U.N. Summit on Sustainable Development in Rio in June 2012, we cover what happened to undermine and make ineffectual the many attempts by world climate scientists to get international agreement on plans to cut back carbon dioxid emissions.

We have also reported on many disasters related to global warming that have wreaked havoc in this period, from Hurricane Katrina to floods and drought in Africa and the Midwest to tornadoes in the South and sizzling temperatures in Detroit’s auto plants.

These articles describe how government policy, particularly in the U.S., has been dictated by the highly profitable and powerful energy companies, whose clout is linked to the big banks and the Pentagon.

Like a red thread running through all this is our critique of capitalism as the ultimate cause of the planetary disaster known as global warming. It is not technology but the class interests that technology serves that determine whether our impact on the planet will be sustainable or not. With capitalism’s evolution into global imperialism, the problems it creates impact most severely on the pillaged nations of the global South.

Frederick Engels, Karl Marx’s closest collaborator, wrote in 1876: "Let us not ... flatter ourselves overmuch on account of our human victories over nature. For each such victory it takes its revenge on us. Each of them, it is true, has in the first place the consequences on which we counted, but in the second and third places it has quite different, unforeseen effects which only too often cancel the first."

Engels wrote this during the early, tempestuous growth of industrial capital in Europe and the U.S., when huge fortunes were made exploiting labor in the mines, the steel mills and the newly
electrified factories.

Today Marxism is an indispensable tool to understanding why capitalism is headed toward a train wreck and what must replace it. As protesters at the 2011 conference on climate change in Durban, South Africa, demanded: “Climate change? Social change!”