First published in Workers World in October 1996, and then republished on Sept. 27, 2001, just before the U.S. invasion of Afghanistan, with the following introduction:

The media are suddenly full of opinions about Afghanistan, now that the George W. Bush administration is accusing Osama bin Laden and other Islamic fundamentalists of being behind the attacks on the World Trade Center and Pentagon.

In the 1980s, the reactionary political elements now ruling Afghanistan were working with the CIA to overthrow a progressive Afghan government supported by the Soviet Union. After the spending of an ocean of blood and billions of U.S. dollars, the reactionaries won.

Washington was happy and unconcerned, as its protégés went on to butcher Afghan progressives, restore landlordism and repress women while fighting among themselves.

The eventual triumph of the Taliban faction represented a catastrophe for the Afghan people. Just in the last year, thousands of Afghan refugees have died of starvation and exposure, and Kabul, the capital, is such a wasteland that the U.S., demanding vengeance, can’t even find anything to bomb.

On Oct. 10, 1996, Workers World printed the following article about how the U.S. strangled a popular revolution led by the Progressive Democratic Party of Afghanistan (PDPA) against feudalism and imperialism.

Not that long ago, the bourgeoisie could still feel pride in their revolutionary history. They continued to celebrate the 1789 French Revolution and many other great victories in the struggle against feudal oppression.

They even spoke approvingly of the 1917 overthrow of the czarist autocracy in Russia. The problem, they said, was that the Bolsheviks had spoiled that struggle for democracy by going too far.

But capitalism in this rotten age of U.S. imperialist conquest of the globe has degenerated so far from its revolutionary roots that it is now, to borrow a phrase from Henry Kissinger, to the right of the czar. And it is celebrating the return of absolute feudal rule in Afghanistan.

The powerful media engines, their reach multiplied by the most modern technologies, are presenting the world with instant photographic images of a lynching — that’s all it was — of the few progressives left in Kabul.

To make the deed more palatable, the media use adjectives like butcher to describe former President [Mohammad] Najibullah and his aides. Dragged out of the United Nations compound where they had sought asylum for the last four years, they were beaten to death and then left hanging for all to see.

But among themselves, foreign-policy experts for the U.S. establishment know that the Afghan progressives’ real crime was that they tried to carry out a social transformation in their country in the direction of socialism.

What authority bears witness to this? None other than the U.S. Department of the Army itself.

The Pentagon puts out what it calls country study books on almost every country in the world. They are updated every few years. These books contain basic information for the use of U.S. personnel traveling or working abroad.

There’s nothing classified in them. They’re available in most libraries.

Afghanistan — a Country Study for 1986 has of course the anti-communist line expected of a Pentagon publication. But it also contains much useful information about the changes instituted by the Afghan Revolution of 1978. 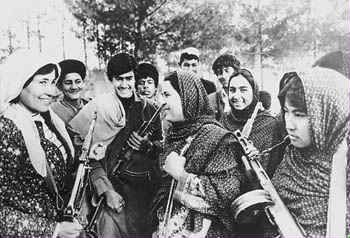 Women in the pro-communist Afghan militia in the early 1980s.

Before the revolution, 5% of Afghanistan’s rural landowners owned more than 45% of the arable land. A third of the rural people were landless laborers, sharecroppers or tenants.

Debts to the landlords and to money lenders were a regular feature of rural life, says the U.S. Army report. An indebted farmer turned over half his crop each year to the money lender.

When the PDPA took power, it quickly moved to remove both landownership inequalities and usury, says the Pentagon report.

The revolutionary regime set up extensive literacy programs, especially for women. It printed textbooks in many languages — Dari, Pashto, Uzbek, Turkic and Baluchi. The government trained many more teachers, built additional schools and kindergartens and instituted nurseries for orphans, says the country study.

Before the revolution, female illiteracy had been 96.3% in Afghanistan. Rural illiteracy of both sexes was 90.5%.

By 1985, despite a counterrevolutionary war financed by the CIA, there had been an 80% increase in hospital beds. The government initiated mobile medical units and brigades of women and young people to go to the undeveloped countryside and provide medical services to the peasants for the first time.

Among the very first decrees of the revolutionary regime were to prohibit bride-price and give women freedom of choice in marriage.

Historically, said the U.S. manual, gender roles and women’s status have been tied to property relations. Women and children tend to be assimilated into the concept of property and to belong to a male.

Also, a bride who did not exhibit signs of virginity on the wedding night could be murdered by her father and/or brothers.

The revolution was challenging all this.

Young women in the cities, where the new government’s authority was strong, could tear off the veil, freely go out in public, attend school and get a job. They were organized in the Democratic Women’s Organization of Afghanistan, founded in 1965 by Dr. Anahita Ratebzad.

Ratebzad’s companion, Babrak Karmal, was one of the young revolutionaries who had formed the People’s Democratic Party of Afghanistan in that same year and would later become president of the country.

A revolution was literally thrust upon this young party in 1978.

The reactionary government of Mohammad Daoud, which was close to both the Shah of Iran and the United States, arrested almost the entire leadership of the PDPA on April 26, 1978. There had been a huge funeral procession just a week earlier for a murdered member of the party, and the progressive masses in Kabul saw the new arrests as an attempt to annihilate the party just as the military junta had done to the workers’ parties in Chile in 1973.

An uprising by the lower ranks of the military freed the popular party leader, Nur Mohammad Taraki — the soldiers actually broke down his prison walls with a tank. Within a day, Daoud was overthrown and a revolutionary government proclaimed, headed by Taraki.

This uprising of the soldiers and the city masses, many of them low-paid civil servants in a country with very little industry, was every bit as glorious as earlier revolutions against feudal tyranny in Europe. It held the promise of breaking down the old traditions based on oppression and fear.

The leaders of the PDPA were educated; although some, like Taraki, came from very poor families. But they had been to Kabul University; some had studied abroad, and they yearned to bring enlightenment and material progress to Afghanistan.

Had all this happened 150 years ago, the feudalists would have been overthrown and Afghanistan welcomed into the fold of progressive bourgeois nations. But that was before the age of imperialism and especially before the era of proletarian revolutions and the Cold War.

The U.S. CIA began building a mercenary army, recruiting feudal warlords and their servants for a holy war against the communists, who had liberated their women and their peasants. Washington spent billions of dollars every year on the war.

The only country in the area ready to help the Afghan Revolution was the Soviet Union. The USSR intervened militarily. But it could not defeat this well-armed counterrevolutionary force.

Every battle was a test, not only of Soviet military might but of the political resolve of its leaders. They finally withdrew the troops in 1989 as the shift to the right within the USSR became critical.

More than 2 million Afghans have been killed in this struggle, and millions more made refugees. Now half the remaining population — the women — have been returned to the status of property without a single human right. A poor man unable to pay his debts can have his hand cut off for theft.

The schools and clinics built by the revolution are in ruins. The Taliban — a fundamentalist group supported by Pakistan that was trained and armed by the U.S. CIA — has taken the capital and is pursuing the war northward, toward the border with what were the Central Asian Soviet republics.

This is the hideous face of counterrevolution. Afghanistan has been dragged back more than 100 years. But it was the most modern weapons and communications systems, made in the USA, that killed the progressive dream of a generation of Afghan social revolutionaries.