The Pentagon withdrew its forces from Bagram Air Field in Kabul July 2. Corporate media presented this event as an irreversible step in Washington’s departure from the nearly 20-year-old occupation of Afghanistan. Some 650 U.S. troops still guard the U.S. Embassy, and there are many thousands of “contractors” — mercenaries — but many Afghans will see the U.S. departure as guaranteeing a victory for the Taliban-led resistance. 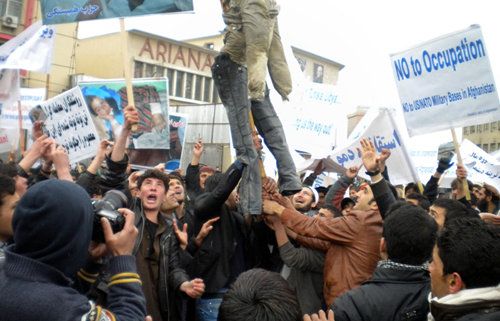 Afghan protesters in Kabul rally against the U.S. invasion of Afghanistan, 2001.

According to articles in the July 3 New York Times, and other newspapers that reflect opinions in the Pentagon and other government agencies, change may come quickly to Afghanistan. Many strategists expect that recent takeovers of territory by the Taliban-led forces will soon put them in a position to overthrow the Kabul regime and replace it.

The narrative in the media about Washington’s dilemma has been deceptive. It goes like this: U.S. troops staying in Afghanistan means endless war that the U.S. Armed Forces are unable to win; U.S. troops leaving Afghanistan means abandoning Afghans — and especially Afghan women — to a misogynist fundamentalist regime.

What is most deceptive about that “dilemma” is that it assumes U.S. imperialism was or is oriented to making Afghanistan — or any other country it invades or subverts — a better place for its people. On the contrary, the imperialist U.S. ruling class aims to exploit the labor, natural resources and strategic value of all these countries and peoples. Even when it is unable to conquer the country, its military intervention leaves misery and/or chaos — as in Iraq, Afghanistan, Libya and Syria.

The corporate media emphasize that the U.S. intervention came after the bombing of the World Trade Center and the Pentagon Sept. 11, 2001. What they leave out is that Washington began its subversion in 1978. That year, a progressive revolution in Kabul, the capital city, deposed the Afghan king and put a young and small communist party — the People’s Democratic Party of Afghanistan — in power. 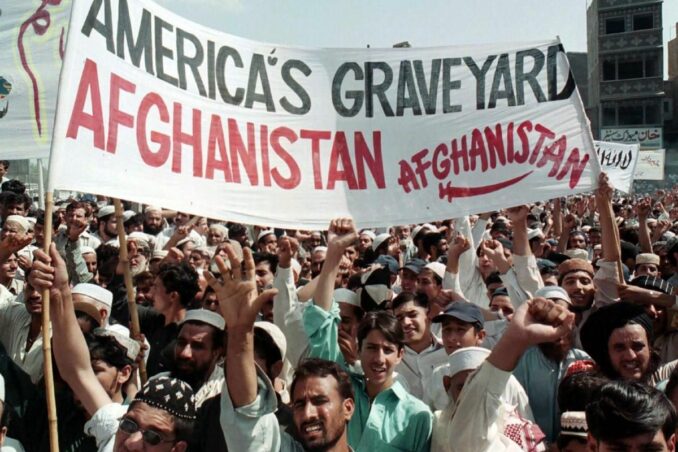 Pakistani protesters rally against the U.S. invasion of Afghanistan in Karachi, September 2001.

This new progressive government had strength in the army, as well as in Kabul and a few other cities. It was much weaker in the Afghan countryside, which was controlled by warlords and big landowners. The PDPA immediately called for reforms, a major one being to educate Afghan girls and women and involve them in the party as teachers — and as soldiers in the revolutionary army.

The U.S., working through the CIA and the Pakistani intelligence agency ISI and collecting funds from reactionary regimes like Saudi Arabia, immediately armed and funded Afghan warlords and reactionary fundamentalist groups and sects like Al Qaeda. The groups whom the U.S. supplied arms to killed many women students and teachers, with no complaints from the CIA or U.S. strategists.

The U.S. provided or organized billions of dollars in arms to these murderers, especially after the Soviet Union intervened to aid the Afghan government. U.S. strategist Zbigniew Brzezinski considered this aid key in forcing a counterrevolution in the USSR that would lead to its downfall. Brzezinski himself admitted that the U.S. intervention predated Soviet aid for the Afghan communists.

When the various warlords were unable to establish a stable regime in Afghanistan, the Pakistani ISI backed the youthful Taliban — a fundamentalist group whose initial founders in the early 1990s had been trained and armed by the U.S. CIA to fight the Soviet troops — which took over in 1996. At that time, the U.S. remained friendly to the Taliban. (tinyurl.com/7h36h2w8)

The Sept. 11, 2001, attacks provided the U.S. government with nearly unanimous ruling-class support for new wars and aggression. The George W. Bush administration took advantage of this, quickly invaded Afghanistan, the home base for Al Qaeda (who took credit for 9/11), and prepared the invasion of Iraq — whose government had nothing to do with the 9/11 attacks.

While the Pentagon was able to quickly depose the Taliban government and force them out of Kabul and other major cities, for the next 20 years the U.S. has been unable to establish a stable client regime in Afghanistan.

Meanwhile, the war has cost hundreds of thousands of Afghan lives, mainly civilians, the lives of some 3,000 U.S. troops and about $2 trillion of U.S. workers’ tax monies.

The conditions for most Afghan women have deteriorated during the course of the U.S. occupation, and it would be foolish to expect the U.S. Armed Forces to liberate Afghan women. Maternal mortality has increased. (See Leslie Feinberg’s 2007 article in Workers World, reprinted this April 6 to see this argument developed – workers.org/2021/04/55649/)

The withdrawal of U.S. forces, while far from liberating all Afghans, is a necessary step in a struggle that will continue.