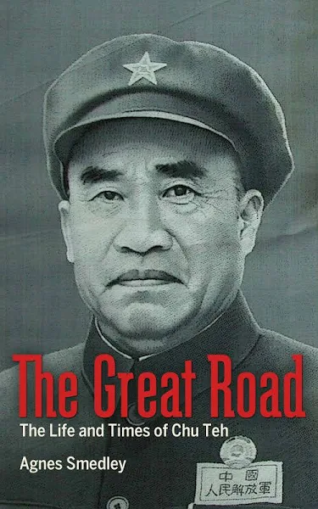 For a fiction reader, a non-fiction book can be a bit of a slog. But this book, still unfinished when the author died in 1950 and first published in 1956, was so fascinating. Recommended to me by one of Workers World Party’s leading comrades, “The Life and Times of Chu Teh” by Agnes Smedley was exciting to me because it gave me real insight into the Chinese Revolution.

General Zhu De (contemporary spelling) was a close associate of Mao Zedong and the Supreme Commander of the New People’s Army (Red Army). He was a military and political leader in the People’s Republic of China until his death in 1976.

It took an incredible struggle by the Chinese people to overthrow the old feudal order. The book is a timeline of the Chinese struggle against imperialism and profiteers, using the vehicle of General Zhu’s life. And what a life it was!

There is much in the book about the Long March. The revolutionary army, led by the Communist Party, was able to put theory into practice in the liberated territories of the North. No more taxes on the poor, no confiscation of crops from the poorest peasant farmers, schools for everyone including  adults, the Red Army working hand in hand with the peasants to increase food production, and participatory democracy in every village, town and city. Political education was stressed which encouraged principled behavior by Communist leaders and the rank and file.

Fast forward to 2020 when COVID burst onto the world scene. The health of the people of China came before the profits of multinational investors. COVID infection has been contained. China today is still a dictatorship of the proletariat – a workers’ state – thanks to the mighty Chinese Revolution of 1949.

The book is a long read, but stick with it. It’s worth it!

For more information on socialist vs. capitalist countries in response to COVID, see “Vaccines highlight differences between capitalism and socialism” at workers.org.