Early on in the COVID-19 pandemic, it became clear which countries had effective responses to the spread of the virus, and which did not. 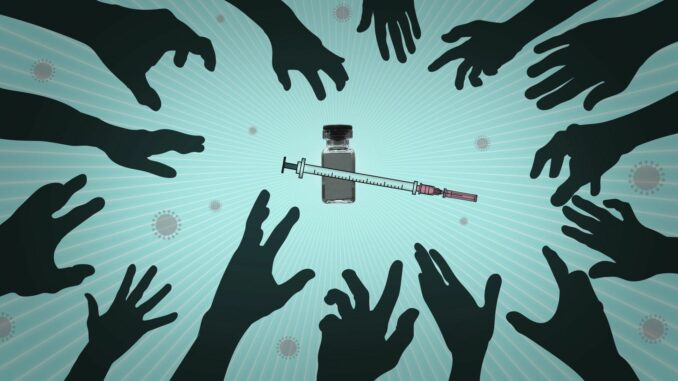 Wuhan, China, underwent a strict lockdown for 76 days, successfully bringing the virus under control in the world’s first city to identify an outbreak. The rest of China also controlled the virus, preventing potentially millions of deaths had they allowed it to spread at the same horrific scale as did Britain, Belgium, Italy and the U.S.

The pandemic revealed many fundamental differences between many capitalist countries and countries oriented toward socialism. These differences encompass deep, core aspects of society — how much or how little human life is valued, whether science takes precedence over the pursuit of profit, and individualism versus collectivism. With the production and distribution of vaccines coming into full force, more differences are coming to light.

China and Vietnam brought the virus swiftly under control and vigorously suppressed its reintroduction. These countries pursued a preventative, multipronged strategy that saved countless lives and greatly shortened the severe social and economic disruption caused by the pandemic.

Vaccines are an important tool for these countries — socialist-led Cuba stands out for its vaccine research and production. China is the world leader in vaccine exports, with their vaccines reaching 60 countries. Yet vaccines are clearly not their last, desperate hope to contain the worst pandemic in over a century.

Developed capitalist countries, having failed to prevent COVID’s spread from the beginning, must rely far more on vaccines to control the pandemic. Nothing else they have done has been able to extinguish the virus’s deadly rampage throughout their populations.

With the massive accumulation of wealth and talent granted to capitalist countries that occupy the top of the imperialist world order, they have highly developed, high-tech pharmaceutical and biotechnology industries. Infused with federal funding, private corporations developed novel vaccines using cutting-edge mRNA technology. These vaccines could theoretically be quickly tweaked to respond to mutant virus variants and could one day provide a universal flu vaccine, or even possibly an effective HIV vaccine. Unlike older vaccines, their production does not require handling live viruses, thus increasing safety at labs and production facilities.

Yet the capitalist relations of production in which this technology was developed limit its full potential for use in serving human needs. Aggressive use of patents can restrict their deployment, increase prices and give huge power to private pharmaceutical and biotech companies.

Pfizer demanded that Argentina and Brazil put up state assets — military bases and embassy buildings — as collateral for potential vaccine-related legal costs. In one Latin American country that has a confidentiality agreement with Pfizer, a vaccine deal was delayed for three months due to Pfizer’s aggressive negotiating. (tinyurl.com/3h7zp3z8)

The components in mRNA vaccines are controlled by private capitalist corporations. Only a handful of Western companies, such as Germany’s Merck and Canada’s Acuitas, supply the lipid nanoparticles that coat the mRNA bundle in the vaccines and make them viable.

At a press briefing April 9, World Health Organization Director-General Dr. Tedros Adhanom Ghebreyesus said that 87% of vaccines have gone to wealthier countries, while low-income countries received just 0.2%. (tinyurl.com/xeubrpxj) This is the inevitable result of vaccine research and production when controlled by a few large corporations, which supply to those with the most ability to pay first and squeeze out every outrageous concession they can from developing countries.

Imperialism relies on military invasions and drone strikes, but it needs private corporations based in imperialist countries using vaccines and other lifesaving technology to coerce and manipulate sovereign countries in the Global South.

The vaccine story is not just being written by Pfizer and Moderna. Cuba and China are vaccine leaders, but they are charting a much different course than capitalist countries. Their vaccine development is state-led and owned collectively by the people, not big corporations.

Cuba opened its first biotech research and production center in 1981. The industry now operates under BioCubaFarma, the Cuban organization of Biotechnology and Pharmaceutical Industries. It is a network of 34 publicly owned companies and scientific institutions working together to coordinate a planned, society-wide approach to pharmaceuticals and vaccines.

The Center of Genetic Engineering and Biotechnology (CIGB) carries out research, development, and production in the areas of human and animal vaccines, therapeutic molecules, such as monoclonal antibodies, and genetically modified plants. Cuba’s Finlay Institute is the country’s premier vaccine research and development center, known for developing the world’s first meningitis B vaccine over 30 years ago. (tinyurl.com/h242znwe)

For a small country of 11 million people, under heavy sanctions from and an illegal blockade by the U.S., Cuba’s biomedical sector is unusually sophisticated compared not only to its peers in the Global South, but to many developed capitalist countries. It now has five COVID-19 vaccines in development, with two in stage III clinical trials named Soberana-02 and Abdala.

Cuba is the first Latin American country to develop vaccines and is by far the smallest in the world to do so. Thanks to decisions made decades ago by the Communist Party of Cuba to prioritize the health of the island’s people, Cuba is in a prime position today to develop and mass produce vaccines and other pharmaceuticals.

Cuba’s current COVID-19 vaccines do not use the novel mRNA technology but simpler tried-and-true methods using a fragment of virus protein to stimulate an immune response. China’s Sinovac and Russia’s Sputnik-V vaccines rely on synthesized or extracted virus fragments.

Cuba plans to vaccinate all of Havana by the end of May, 60% of the country by August and the entire country by the end of 2021, which will make it one of the world’s first to achieve “herd immunity.” Vaccinations are voluntary, but the government expects broad adoption by the public, who are highly educated and informed on issues regarding public health. This is due to decades of extensive public health campaigns, free national health care, free education and the promotion of science and technology.

Cuba’s vaccine industry is currently reorganizing to be able to produce 100 million doses for export. (tinyurl.com/s8urns8z) It has signed contracts to produce vaccines in Venezuela and Iran, greatly expanding the scale of the international vaccine effort. It is developing vaccines that can be stored at room temperature for weeks, making them attractive to developing tropical countries.

The Pfizer and Moderna vaccines must be kept at ultracold temperatures, creating a logistical problem for countries without developed medical infrastructure. Ronald Sanders, Antigua and Barbuda’s ambassador to the U.S., told the Washington Post that “Europe, the U.S. and Canada bought up all the vaccines already. So if Cuba does pass its trials, and the WHO does approve it, yes, we will be in line for it, and gratefully so. And I would be surprised if the Cubans charged us more than cost and a minor amount of money.” (Washington Post, Mar. 29)

China’s vaccine effort is remarkable in many ways, and like Cuba’s it’s led by publicly owned industries, not capitalist corporations. By the end of 2022, China plans to produce 5 billion vaccines and vaccinate 70% of its own population annually. (tinyurl.com/37krwnp6)

China has administered over 160 million shots domestically, second only to the U.S., and has shipped over 80 million doses around the world, plus another 90 million doses’ worth of ingredients to be finished in factories in Indonesia and Brazil, according to the April 9 South China Morning Post. Responsible for a third of the total vaccines administered globally, despite making up less than a fifth of the world’s population, China is a world leader in COVID vaccines.

China is also working on its own domestically produced mRNA vaccines, which are expected to start rolling out by the end of 2021. Plans for a phase III trial for one such vaccine are already underway, and Mexico has agreed to stage trials of it and the subsequent manufacturing.

Last December, a production facility that can produce 120 million doses of the mRNA vaccine began construction in China. Developed jointly by China’s Academy of Military Science (AMS), Walvax Biotechnology and Suzhou Abogen Biosciences, the ARCoV mRNA vaccine can be kept at room temperature for up to a week, unlike the Pfizer and Moderna vaccines. China has developed its own lipid nanoparticle coating, so that it would not have to rely on Western capitalist firms such as Merk for this critical vaccine component. (Korea Times, Apr. 11)

Outside China and Cuba, Russia is another major player in the global vaccine effort. Russia’s vaccine development is also state-led, and the country benefits greatly from the highly developed pharmaceutical and biotechnology industries it inherited from the Soviet Union. Even in Russia, where socialism was overthrown decades ago, and capitalism was chaotically and disastrously introduced, the legacy of socialism’s deep commitment to modern, science-based public health for all is still paying dividends for society.

The novel mRNA vaccines produced in capitalist societies can be of great benefit to the world’s peoples, but they will never reach their full potential as long as they are controlled by private capitalist firms. Fortunately there are countries operating under people-centered systems that can produce their own vaccines, including mRNA vaccines, which will allow them to reach herd immunity independently and without having to deal with the Mafia-like antics of Western corporations and governments.

These lifesaving vaccines are also being sent to countries under Western sanctions, providing a critical lifeline for countries with fractured health care infrastructure and shortages of basic supplies. Countries in South America now have another option for vaccines, giving them more independence from the U.S., which, from the 19th-century Monroe Doctrine to today, still considers South and Central America its exclusive sphere of influence.