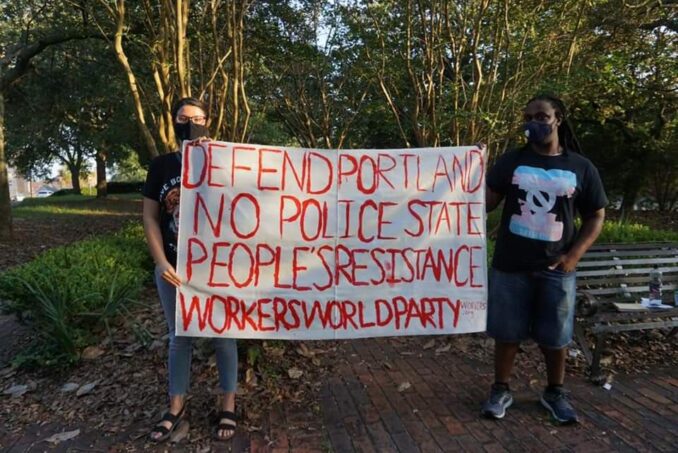 Workers World Party-Pensacola branch held a demonstration Aug. 1 in solidarity with Portland’s resistance to federal forces that have assaulted and kidnapped Black Lives Matter protesters in Oregon. Joining in the protest were members of Strive (Socialist Trans Initiative) and the local branch of the Party for Socialism and Liberation. About 20 demonstrators gathered on Palafox, a main thoroughfare at Florida Square. Its name was recently changed, after pressure from these and other progressive forces, by the Pensacola City Council from the previous white supremacist designation as Lee Square. The council also voted to remove the Confederate soldier statue there. The following is a slightly edited speech given at the rally.

The police were not created to protect the innocent. They were not made to prevent crime. They have always been a tool of the state for power and control, especially Black people who live in the U. S.

When laws were passed restricting the activities of enslaved people, when those laws didn’t work as intended, then any adult white man was allowed to enforce those laws. And when individual action was insufficient, slave patrols were formed that were an offshoot of the militia. With the slave patrols, participation was mandatory, and so that made the entire white male population directly involved in maintaining slave society.

As the Industrial Revolution developed, slave patrols moved into the city and became professionalized, becoming what we would call today the modern police force. Today the role of police is basically the same: to maintain the hierarchical nature of society, especially in terms of class and race.

The Ku Klux Klan, the oldest terrorist organization in the U.S., worked alongside police to suppress the Black Civil Rights Movement. The police worked with the KKK to fight for white supremacy and unite against those fighting for oppressed people to have equal rights.

For almost two months, the people of Portland, Ore.,  have been protesting against police brutality in the wake of George Floyd’s death. These protests have been nonviolent. In late June, President Trump signed an executive order sending federal officers to Portland to “protect” federal property from destruction when protest in Portland became centered around a U.S. District Courthouse and a building housing federal agencies.

Eventually, there were officers from the Federal Protective Service of Homeland Security, ICE (Immigration and Customs Enforcement), BORTAC (Border Patrol Tactical Unit), and U.S. Marshals on the ground in Portland. Federal officers are not trained for “crowd control” but that didn’t stopped them. They attack unprovoked. Night after night, they have blanketed the streets with tear gas, struck protesters with batons, used flash bangs, pepper balls and “less lethal” munitions to “control” the crowd. They struck a protester with a “non-lethal” rubber bullet in the head causing a skull fracture that needed surgery. They attacked members of the press. They detained protesters and pulled them into unmarked cars.

This is urban warfare. When protesters try to protect themselves with gas masks or duct tape shields, they are called “aggressors.”  This U.S. president is doubling down and ignoring demands from local government to leave Portland alone.

This is warfare! This is a racist, white supremacist goverment fighting for white supremacy. The protesters are calling for an end to police brutality, for defunding the police, and are saying Black Lives Matter because Black people are the ones most affected by police brutality and the high rate of incarceration. The only response protesters are getting from the government is more and more police violence.

At present 40% of murders, 70% of sexual assaults and 90% of burglaries in the U.S. go unsolved. This begs the question: Why do we even have police? Why spend so much money on police militarization? Why spend most of the budget of a county or city on police?

The answer is because the only way slavery is still legal nowadays is through incarceration to punish for a crime. The U.S. has the largest prison population [in the world]. Three million people are in prison in the U.S., and 56% of the prison population is Black or Latinx, when together they make about 30% of the total U.S population. Black people are 5 times more likely to be arrested than white people.