Hundreds gathered here in Nash Square, where demonstrations have been held daily since May 30, for a July 29 demonstration — “Smash the Police State: Portland, Gastonia, Roxboro” — highlighting the anti-racist struggle in those three cities. 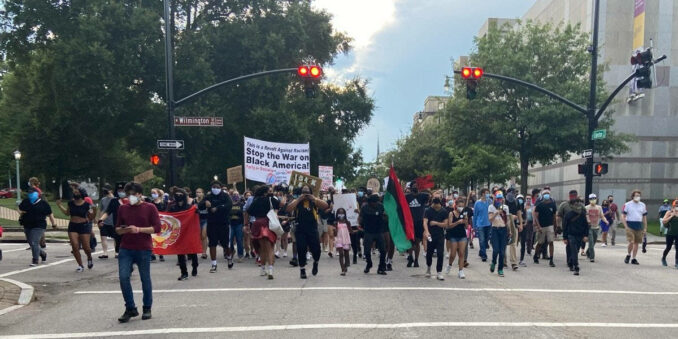 Protesters in Portland, Ore., are struggling to repel federal forces attacking the Black Lives Matter movement. In Gastonia, N.C., unidentified, camouflaged agents dragged Black demonstrators into unmarked cars on July 24 during a protest after a white racist drew a firearm on a Black woman wearing a #BlackLivesMatter button in a local ice cream parlor. In Roxboro, N.C., police pulled over and immediately shot to death a Black man on July 24, then later teargassed mourners who came to honor him.

Speakers from community and socialist organizations addressed the attacks, each linking the federal invasion of Portland to the ongoing violence of U.S. forces against communities, especially Black communities, in North Carolina and around the world. The rally, anti-imperialist and anti-capitalist, lifted broad demands for revolutionary social change.

Cameron of the Working-class Homeless Organizing Alliance pointed out: “A Black man [Marcus Smith] was lynched [in 2019 in North Carolina]. The pigs who did the lynching still walk the beat with a badge and a gun, and the chief pig himself got to retire with dignity in a pension paid for by the community. How can we peacefully protest an occupying force that takes any expression of defiance as an act of aggression?”

Lydia McCaskill, the Black woman threatened in Gastonia, said defiantly, “I have 400 death threats right now; I have security right now, all because I say I was discriminated against. … They hate me, and I love it. Why?  Because it means I’m doing something right.”

Dedan, a member of Black Workers for Justice, representing the Greenville-based revolutionary Black formation “Mapinduzi,” said, “We have to understand as Black, Brown and other colonized people, we have a relationship with domestic colonialism, and it has always been that way. We know that talking about smashing the police state goes far beyond these lapdogs who are riding around in our community. We gotta talk about the police of the world as well. We gotta talk about the military that spends an obscene amount to perpetuate war all over the world, while people right here in the home country ain’t even got decent health care. No matter who you put in that seat, Democrat or Republican, you gotta understand their interest is always in the imperialist agenda.”

Dedan continued, “The only way this country is able to maintain its power is that people, places and resources have to be continually exploited. From South America, from Africa, AFRICOM [U.S. Africa Command] can steal resources. …  If we want to make sure our children have a better world, free from occupation or policing and all types of environmental injustices, then we have to uproot capitalism.”

The Wake County Black Student Coalition was represented by Sanga: “Police can’t be reformed. The federal agents and the police actions in Portland, North Carolina and all around this nation are a violation of our constitutional rights. We need to abolish [Immigration and Customs Enforcement], get the feds out of Portland, defund, demilitarize and abolish the police. I don’t know about y’all, but I remember the words of Malcolm X — cuz I’m feeling like X these days: “By any means necessary.”

A statement was also read from the Party for Socialism and Liberation-Central North Carolina branch, emphasizing links between U.S. police violence, imperialist militarism and capitalist oppression of the working class.

After the speeches, Victoria and Micah, organizers with Smash Racism Raleigh, called for a march to the nearby Terry Sanford Federal Building, homebase for Department of Homeland Security forces and U.S. marshals from the Department of Justice. It is also an environmental threat to nearby historically Black neighborhoods where it has spewed untreated sewage for decades.

The militant march went through gentrified downtown and nearby housing developments, which had displaced many of the marchers or their friends and families. The march continually raised the names of some of those murdered in North Carolina by cops, including Keith Collins, Akiel Denkins, Kyron Hinton, Soheil Mojarrad, Marcus Smith and David Brooks Jr., who was killed only days earlier by the Roxboro Police Department.

The demonstration moved through Raleigh, leaving street art with the names of the those killed by police and marking known lynching sites around the city, before coming up against a police line. Protesters formed up to hold a major intersection and shout down the cops. The police line, weakened as individual officers faltered, until the state — as always — turned to force, brought out riot control weapons and made a false arrest. The single arrest was met with jail support from Smash Racism Raleigh, the Working-class Homeless Organizing Alliance and the National Lawyers Guild.

The rally and march were safe, powerful and one of the largest and most militant actions of the recent uprising here. Raleigh and North Carolina show no signs of backing down, and this powerful display of many organizations and people will be a force to be reckoned with going forward. Black Lives Matter!