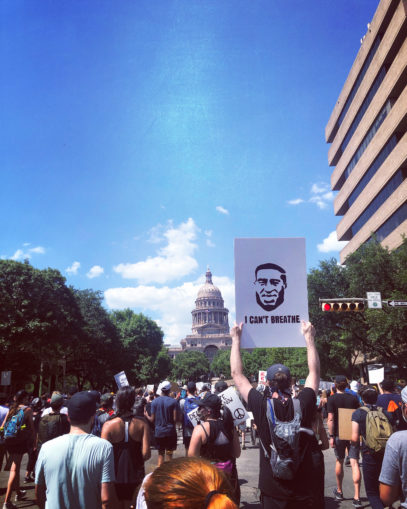 By Ananya Sabharwal and Isabella Ricks

On June 7, the Austin Justice Coalition, an activist-led organization founded by Chas Moore and oriented toward battling institutional racism, led a protest spanning two miles from Huston-Tillotson University to the Texas State Capitol to bring awareness to the Black Lives Matter movement. Its goal is to defund the Austin Police Department.

More than the discomfort of the heat, more than APD’s guns locked, loaded and aimed at us, more than the eyes of the Texas State Troopers, the message unified us all to rise up against the system, comfort be damned.

Brenda Ramos, the mother of Michael Ramos, an unarmed Black and Latinx man murdered by the Austin Police Department in April while his hands were in the air, addressed the crowd in front of Huston-Tillotson, thanking them for caring about her son. Caravans of cars followed and supported us with water bottles, masks, sunscreen and snacks, while honking and raising fists in solidarity as we marched from the east side of I-35, historically a corridor of segregation, toward the Capitol.

People shouted out reminders to take care of ourselves and called out the names of Sandra Bland, Trayvon Martin, Mike Ramos, George Floyd and many others, demanding we remember their names and their stories. And that we remember each lived life of hope, of fear, of laughter, of sadness, of joy and of pain.  Some urged the crowd on as it moved toward the state capitol; others gave impassioned speeches in front of the locked gates of the Capitol and on the steps of the APD headquarters. One man told the crowd, his voice cracking with emotion, “We are fighting for my life!”

Folks from the Black revolutionary group 400+1 set up a tent under the overpass and carefully watched the collected group of protesters in front of APD headquarters. Members of 400+1 stepped into action when the APD arrested a houseless man for “fighting” and “not showing his ID.” They immediately videotaped the encounter with the arresting officer and contacted 400+1’s legal aid.

The swift camaraderie and solidarity among the crowd reverberated throughout downtown and united us all.  We marched against the system. We marched as a reminder to the system that we will not and cannot be silenced.