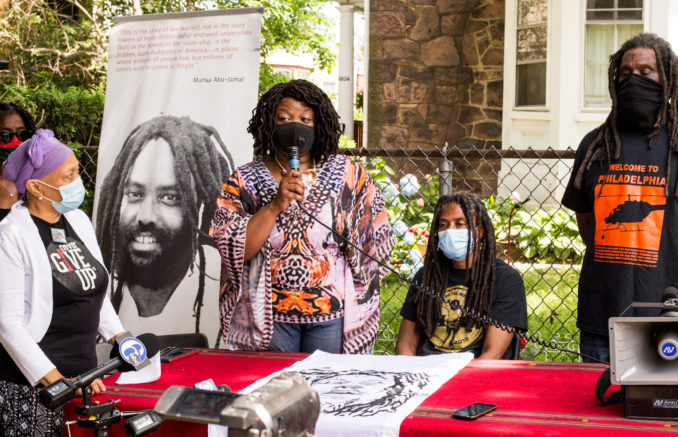 Delbert Orr Africa passed away on the evening of June 15 surrounded by friends and his MOVE family. A June 16 press release from MOVE describes Africa as “an early counterpart 42 years before George Floyd.”

In 1978, Delbert Africa was one of nine MOVE members arrested by police, who attacked the group’s home in Philadelphia’s Powelton Village. He had been kicked and severely beaten by police, who broke his jaw and several ribs. The iconic picture of Delbert, caught on camera with his arms spread wide prior to the police beating, has become symbolic of Philadelphia police brutality.

He and other MOVE members were sentenced to prison on third-degree murder charges stemming from the standoff. The police attack on the house had left Officer James Ramp dead, most likely from friendly fire. Africa was finally released from prison this Jan. 18, some 12 years after he first became eligible for parole.

This reporter had the opportunity to meet Delbert following his release and was impressed by his warmth, political clarity and sense of humor.

At the press conference organized outside their West Philadelphia compound, several MOVE members described the state’s deliberate efforts to murder family members, including the bombing of MOVE’s home on May 13, 1985, which left six adults and five children dead. Delbert lost a daughter in the police assault.

MOVE 9 member Janine Africa, who was released from prison last year, stated that in 1998, “Our sister Merle Africa, who had been healthy but was forced to go to an outside hospital, mysteriously died and did not come back. Phil Africa was also sent to a hospital and died two days after he came back to the prison” in 2015.

Delbert’s daughter Yvonne Orr-El described the decline in her father’s health over the last 18 months due to the prison’s neglect and mistreatment of his illness.

“On Aug. 8, 2019, he was taken to the hospital and not allowed communication with his family until we launched a social media campaign to pressure prison officials.  When they finally began to give him medical treatment it was not what he needed. He never once received the consultation he needed — had he received proper treatment he would be here with us today.

“After he came home, he received care for cancer at a Philadelphia area hospital. The doctors and nurses there said the prison provided a lot of wrong treatments and they could not understand why the prison staff and doctor did what they did. The prison doctor knew his kidneys were starting to fail and withheld the treatment that would have kept him alive. The cause of death is murder!”

MOVE 9 member Janet Africa stated: “Last month public officials including [former mayors] Ed Rendell and Wilson Goode came out with apologies for what happened 35 years ago in Philadelphia [the bombing of MOVE’s home that left six adults and five children dead].  But not one of them has ever had to answer for what they did.  Not one has been held accountable.  We are not accepting this.

“MOVE people came home because of the support of our family and the support of people standing in solidarity and unity with us.  The justice we want is for Mumia Abu-Jamal to be released.”

Orr-El echoed that sentiment: “Not one cop was arrested for what happened on May 13, 1985, and now they want to apologize.  If you step on someone’s foot you apologize. You do not apologize when you bomb people, shoot at them so they run back into a burning house, and then burn down an entire city block.

“My mother was a member of the Black Panther Party in Chicago. Three months after I was born, Chicago police murdered Fred Hampton. I was denied the right to visit my father for 41 out of the 42 years he was imprisoned.

“Now you have this clown [Trump] who wants to visit Tulsa, where the Black community was bombed in 1921 just like they bombed us in 1985. I have seen nothing but systemic racism since I was born.”

Orr-El said she will remember the legacy her father left as a member of MOVE: “This warrior king is a supreme being. This warrior king is someone who taught the world how to learn to love and know how to have pride within himself to understand what the system really does to us.”