June 14 — For nearly 10 years, the Black Organizing Project has been fighting to defund and dismantle the Oakland School Police Department. 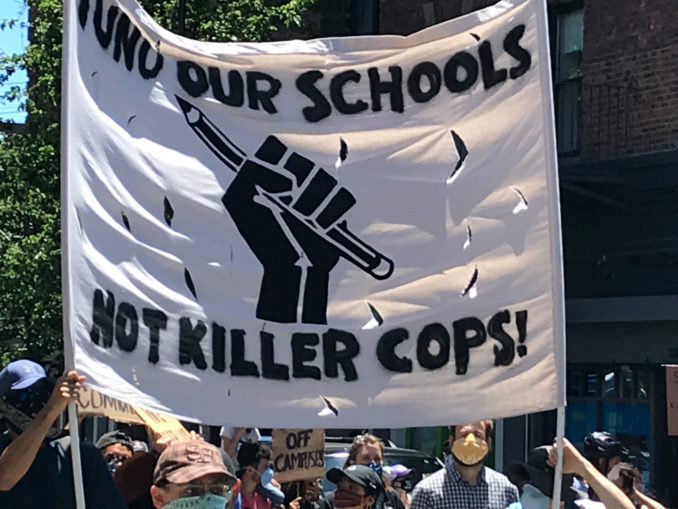 Oakland is the only school district in Alameda County with its own police system.

After years of organizing, fueled by a massive wave of protest against police terrorism and murder, BOP and the entire Oakland community may finally win this campaign.

Activists have collected invaluable data about how Black and Brown students are disproportionately disciplined, suspended and expelled in the Oakland Unified School District (OUSD). There have been countless testimonials and protests at school board meetings, with no attention paid by board members and elected officials. Now, even the district superintendent is talking about how to transition to a school system without its own police department.

With everything moving quickly in the last week, BOP continues to organize and orchestrate the final leg of their campaign, dubbed the “People’s Plan for Police-Free Schools,”

BOP unveiled that plan for 2020 last fall in front of the school board and continued to collect data about the harmful impact of disciplinary policies and the use of the school police force inside the Oakland public schools.

Then the Oakland struggle was pushed center stage by rebellions protesting the police murders of George Floyd, Breonna Taylor and other victims of police terror.

On June 10, Rosie Torrres, District 5 School Board Director, in collaboration with BOP,  presented the “George Floyd Resolution to Eliminate the Oakland School Police Department” during a virtual school board meeting.

Earlier that day, BOP held an extraordinary press conference and rally outside La Escuelita Elementary School, where the school board usually met before COVID-19 virtual meetings.

Over 100 people came to show support, including many Oakland teachers, members of the Oakland Education Association. Student members of BOP’s organizing team also spoke out about the need to abolish school police.

A 7-year-old girl, whose sister is an outgoing student representative on the board, said it plainly, “Why are cops getting paid more money than my teacher? Defund the school police now!”

BOP’s plan was summarized in a multicolored flyer: “Police Do Not Equal Safety!” The plan includes divesting from school policing by eliminating the school police department; reorganizing campus safety under a Department of Equity; restructuring the role of security personnel to be that of mentors; reinvesting in mental and behavioral health staff; and establishing a Community Oversight Committee to review student and family complaints regarding law enforcement.

In a short solidarity statement, OEA representative Maurice Andre San-Chez said that teachers support the BOP program and also do not want any police in the schools.

Since the George Floyd resolution has not yet been adopted by the school board, BOP plans 10 days of actions before the June 24 vote.

Then, hopefully, OUSD will join the many other districts that, under pressure from the mass movement in the streets, are renouncing collaboration with the police.

What’s clear is that only continued pressure from courageous community organizations like BOP will ensure police-free schools, and the health, welfare and safety of Black and Brown students all over the country.

For more on BOP’s campaign, check out facebook.com/BlackOrgProject.