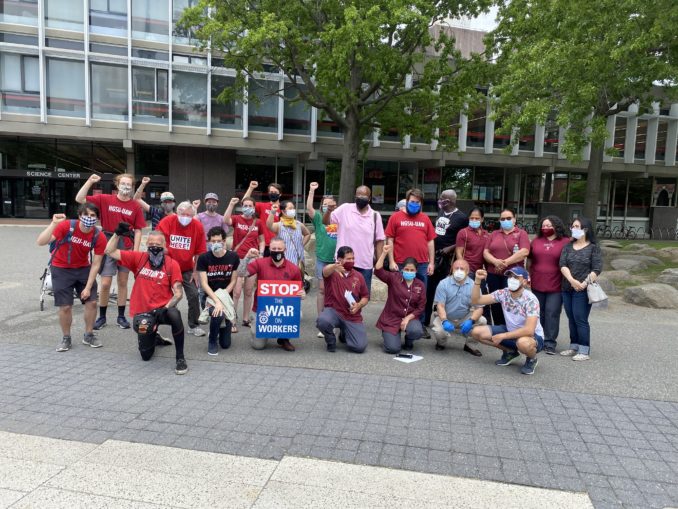 During the recent worldwide upsurge for justice, the Black and Brown workers’ fight to save their jobs — at the flagship bourgeois enterprise Harvard — led to the university’s first antiracist action on June 9. A multi-union worker-organizing initiative drew close to 70 rank-and-file workers and community supporters to Harvard Yard, all taking a knee and raising a fist in a moment of silence and solidarity with the Black community.

Harvard workers were outraged that, after relying on these immigrants of color to do essential and dangerous work throughout the pandemic, the university was going to try to cover its “shortfall” with a 60 percent purge of its mostly Black and Brown workforce. Harvard, with a $40 billion endowment, wants to throw them away like used cleaning supplies after a dirty job is done —as if they don’t matter. Many of them don’t even have peace of mind about whether they will still be in this country with their families come January.

The workers rallied to say they are not accepting the burden of making wealthy Harvard more wealthy. They will not go along with layoffs and furloughs at a time when workers, especially janitors, have had to sacrifice so much, and as the Black community, workers of color and immigrants are under attack.

Conscious of the optics, the administration released an email a few minutes before the noon rally, indicating that layoffs were on hold. However, the email also announced early retirement and voluntary temporary hours reduction programs — an ominous signal that layoffs will be threatened again if participation is insufficient. This is a near certainty as most workers will not find these offers in their interest.

The SEIU 32BJ stewards are also the Salvadoran workers with Temporary Protected Status (TPS) who led the national struggle for permanent, legal residency for all im/migrants. Harvard TPS Coalition activists have stepped forward as the antiracist leaders at Harvard because they face racism — Trump called the 13 Central American, Caribbean and African countries protected by the program “s—hole countries” as he terminated TPS and threw their lives into uncertainty with risk of deportation. But that has only unified these im/migrants in solidarity and love.

These workers know that antiracist unity is needed for our class to win. Their action is an example for unions to follow: to destroy the perception that unions protect racists or have bread-and-butter tunnel vision and no interest in responding to the burning issues of the moment. Winning this latest battle against layoffs in the centuries-old class conflict between Harvard and its local working class — while others are winning concessions such as the right to display BLM slogans at work even at anti-union Starbucks — shows that antiracist labor organizing is an effective strategy.