June 13 — Amid existing protests in support of Black people murdered by police and white supremacists in Georgia and elsewhere, Atlanta protesters continue to brave the streets to fight for Rayshard Brooks — murdered by Atlanta police on Friday night, June 12.

June 17 — Fired Atlanta cop Garrett Rolfe was charged today with 11 counts in the killing of Rayshard Brooks, including felony murder and aggravated assault with a deadly weapon. APD cop Devin Brosnan, also at the scene, was charged with aggravated assault, among other offenses. After Rolfe shot Brooks in the back twice, neither cop provided “timely medical attention” to Brooks, as required by city policy. Instead Rolfe kicked Brooks as he lay on the ground and Brosnan stood on the dying man’s shoulder. According to prosecutors, Brosnan is willing to testify against Rolfe. Fulton County District Attorney Paul Howard said this is the first time that has happened in 40 such cases of police violence his office has handled. Protests that have swept through Atlanta since the murder have continued in Peoplestown, the Black working-class neighborhood where Brooks was killed, and at Centennial Olympic Park and other city locations. 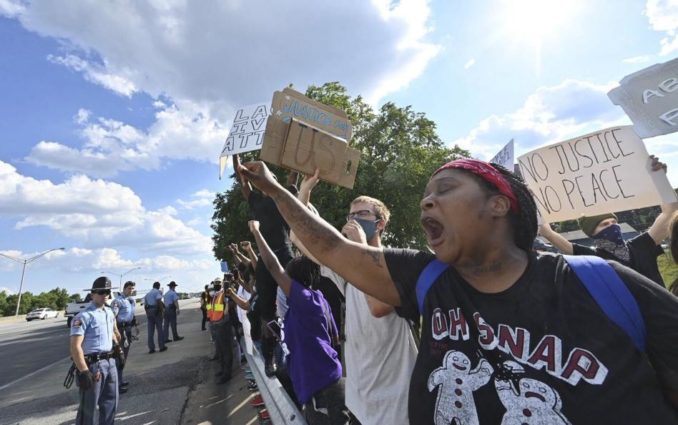 Demonstrators near I-75/85 in Atlanta to protest killer cop, June 13.

Brooks, a 27-year-old Black man, fell asleep in his car that evening in the drive-through lane at a Wendy’s fast-food  restaurant. As customers drove around his car to get service, someone inside Wendy’s called the Atlanta Police Department.

Rolfe fired his gun three times and wounded Brooks as he ran away. Brooks later died in surgery. His death was ruled a homicide on June 14 by the Fulton County Medical Examiner’s Office. The autopsy revealed that Rolfe shot Brooks twice in the back.

Rolfe has been fired from the APD and Bronsan was put on administrative duty.

In what many local organizers call a win after years of demands, APD Chief Erika Shields was forced to resign, despite her claim that this was her own decision. 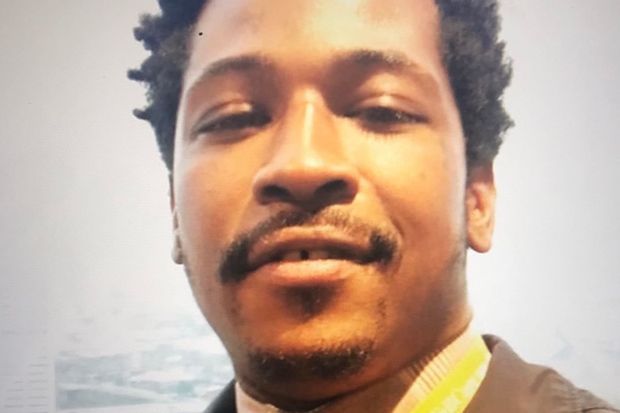 Brooks was father to three children and stepfather to one teenager. According to family lawyers, Brooks was going to take his daughter skating that night for her eighth birthday, which was the next day.

Explosion of anger at injustice

Protests had already been organized in and around Atlanta for June 13 and 14 as a response to white supremacist murders of George Floyd, Ahmaud Arbery, Breonna Taylor, Tony McDade and many more Black people throughout the U.S. For about three weeks, Atlanta and its suburbs have seen near-daily protests responding to these murders.

On Saturday evening, June 13, protesters came out in the hundreds near University and Pryor Avenues, where the Wendy’s was located. Despite a show of force by police in riot gear, who formed a line to block the nearby interstate highway, protesters were able to charge the police line and run uphill to take I-75/85 around 9 p.m.

Protesters interlocked arms and were able to block both sides of traffic — 12 lanes — for hours until police arrived in SWAT gear and arrested 36 people.

Almost immediately after hearing that the APD had lynched another Black man, the community and protesters also surrounded the Wendy’s where Brooks was murdered. At the same time demonstrators were taking over the superhighway, other protesters were setting fire to Wendy’s, where the call was made that ended Brooks’ life. By 10 p.m. it was engulfed in flames.

Later that night, some protesters made it to Zone 3 Precinct, the police station down the road from Wendy’s. Protesters gathered outside the precinct demanding justice for Brooks until, past midnight, police threw tear gas and shot rubber bullets at the unarmed demonstrators.

On Sunday, June 14, the community came out again for Brooks. Hundreds of protesters returned to Wendy’s and then began marching to the Zone 3 Precinct. Around 10 p.m. it was reported that over 100 cars had been parked in nearby roads, blocking police reinforcements from getting to the station. Late-night marches to downtown Atlanta were also taking place, as the righteously outraged set fires and the poor and oppressed — who have been robbed of the wealth their work has created — proceeded to redistribute goods from The Beacon, a gentrified shopping district.

The struggle will continue

The murder of Brooks by the APD generated feelings of sorrow and anger, unfortunately all too familiar to Atlanta organizers, the Black community and those who care and fight for Black lives in the city.

Anthony Hill, Kathryn Johnston, Jamarion Robinson, Oscar Cain, Alexia Christian and Nicholas Thomas — these are only a few of the Black people whom the APD has murdered throughout the years. In a less-reported murder of a Black man, cops killed Lamin Sisay, a man from Gambia, right outside of Atlanta on May 29, only four days after the lynching of George Floyd.

Organizers continue the fight to get justice for these people.

Because of these murders and the brutality that define the APD, Atlanta activists have for years called for APD Chief Shields to resign. Shields is now gone, but the long-standing community demands of closing the city jail and funding the surrounding community — which faces great poverty as gentrifiers continue to flood Atlanta — have yet to be met.

More actions are planned in Atlanta to protest the murder of Brooks by the APD, with some occurring even as this article is being written. Organizers have made it clear they will not stop until there is justice for Brooks and all people murdered by the APD.

Their demands will eventually have to be met — because the Atlanta Black community will continue to struggle, as it has for hundreds of years.

Do not forget Rayshard Brooks! Fight for him and all Black lives!