This protest march and rally, in the small town of Alpine, Texas, might have been a common scene in the tumultuous summer of 1968, but this was June 6, 2020. Not Dallas or Houston or San Antonio, but in Alpine. Hundreds mobilized in solidarity with Black Lives Matter and against the police murder of George Floyd and all forms of injustice, oppression, police brutality and racism all over the country. 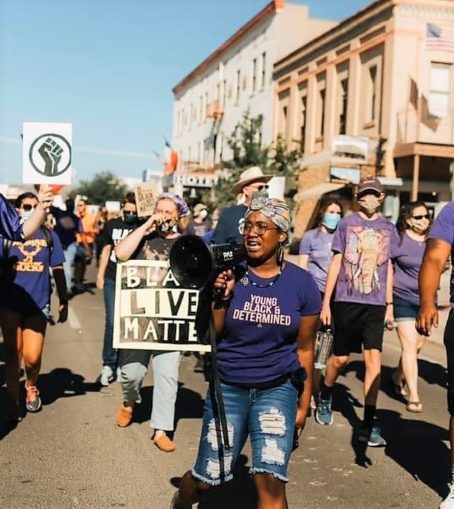 Led by Sedia Woods, an African-American student at Alpine’s Sul Ross State University, over 300 people, including the mayor and county judge, marched through town to the Brewster County Courthouse. Woods told the crowd gathered on the courthouse lawn, “For generations, African Americans have been fighting this fight. It is unfair that I am 22, have a whole life to live and I am ready to die for it. That’s a problem.”

Alpine is not where one would expect a Black Lives Matter event. It is a town of only 8,000 people located in far West Texas, in the remote Big Bend region of the state. Three and a half hours from El Paso and six hours west of San Antonio, it is located in Texas’s largest county — Brewster County, named for a confederate colonel.

The town is about half white and half Latinx, with less than 1 percent African American. The university, with a multinational population of 2,000 students, is named for a confederate general. Nevertheless, people from all walks of life, ages and races, including many students, marched with a passion, determination and  message that Black Lives Matter.

From small towns in the United States to the metropolitan areas, from the local governments to the leaders in Washington, our message is that racism and police brutality will no longer be tolerated. This is not 1968, it is 2020. All human beings are created equal!

— Report and photo by Oscar Cobos